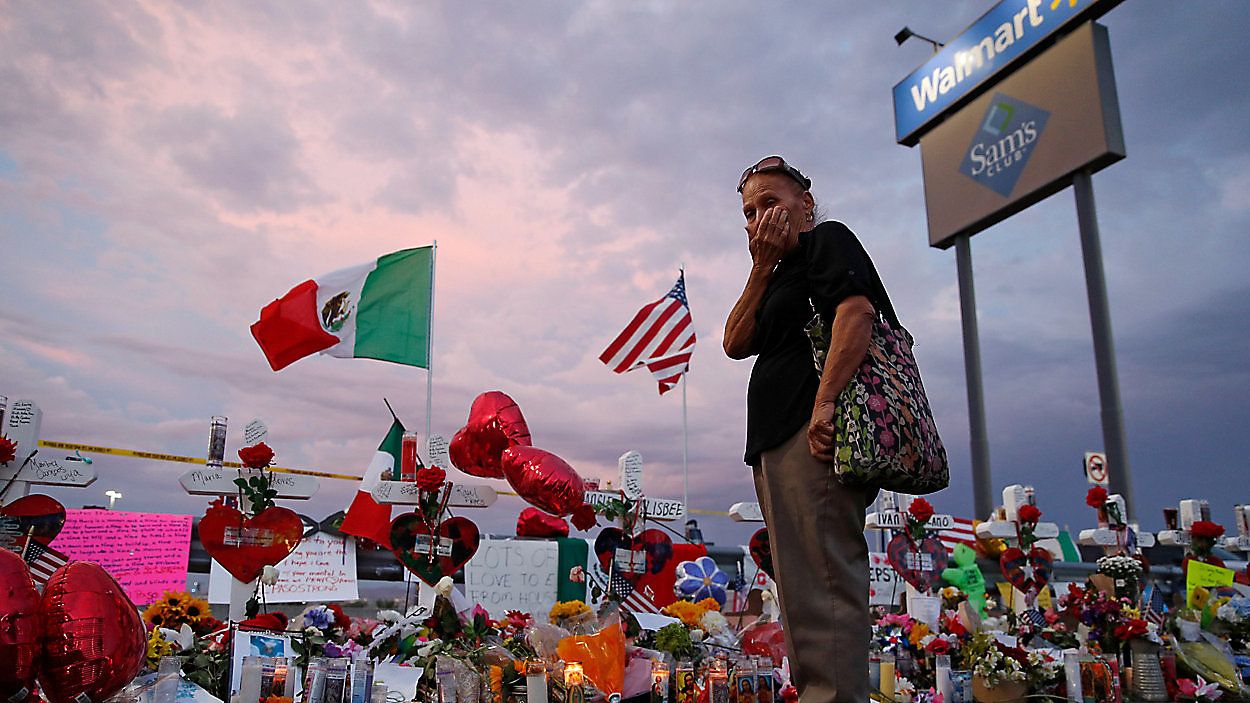 EL PASO, Texas — Wednesday marks three years since one of the darkest days in Texas history. A gunman opened fire inside an El Paso-area Walmart on Aug. 3, 2019, killing 23 people and injuring dozens more.

The accused shooter has yet to go to trial, and the ensuing years have seen more instances of gun violence in Texas and across the country.

The shooting has been described as the deadliest attack on Latinos in modern U.S. history.

Just before 10:40 a.m. that Saturday, the gunman walked into a Walmart Supercenter armed with a semi-automatic civilian version of an AK-47. Prior to that, according to the store manager, the gunman began firing in the parking lot. A “Code Brown” was issued, indicating a shooter, and employees began helping customers to escape or hide.

Following the shooting, the suspect drove away from the store to a nearby location where he identified himself as the shooter and surrendered to the Texas Rangers.

Among those killed were 13 Americans, eight Mexicans and one German. One victim died the day after the shooting, another victim died two days after it, and a third victim died eight months later.

The suspect was charged with capital murder. Police believe he purchased the gun legally. 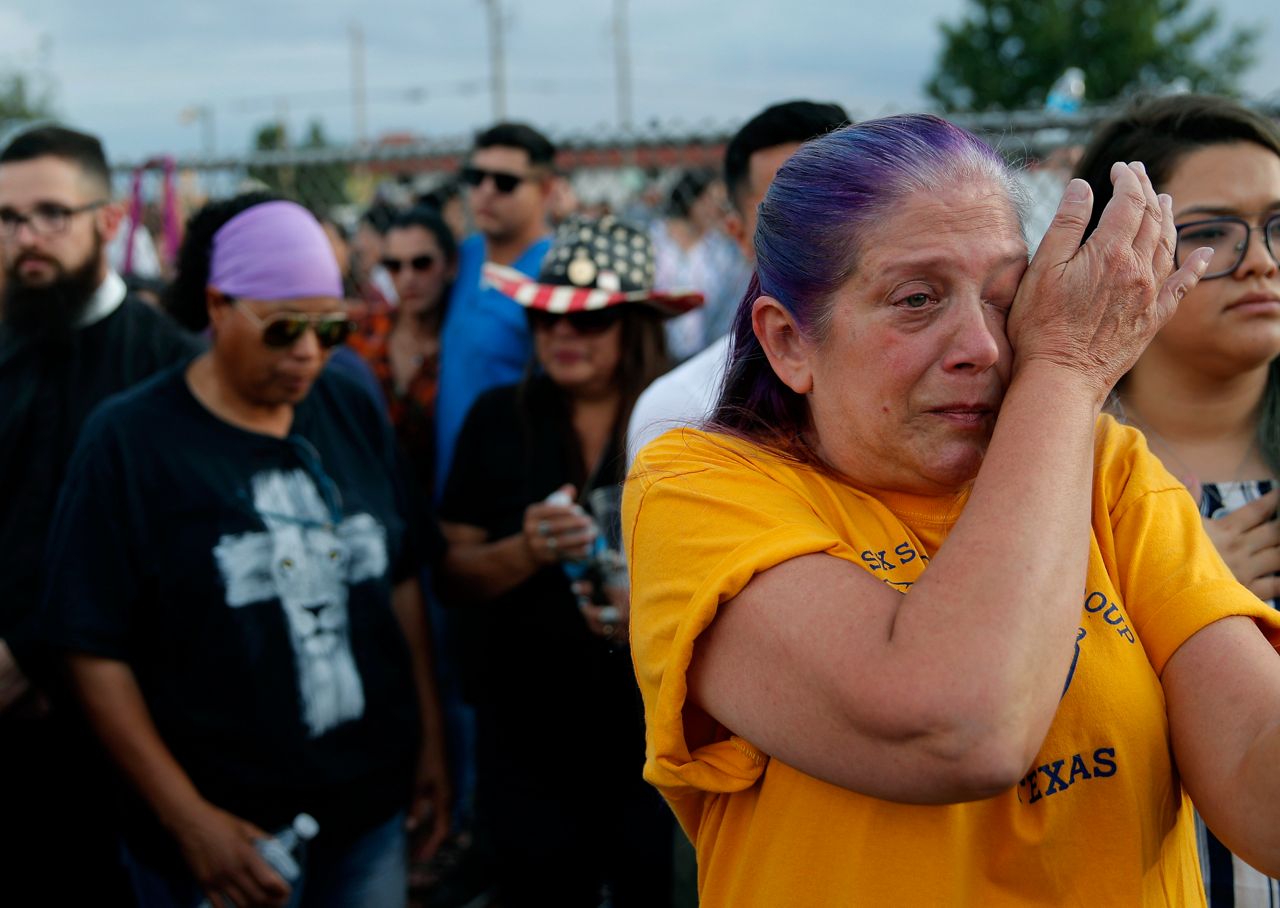 Cathe Hill wipes tears from her eyes during a vigil for victims of the Aug. 3, 2019, mass shooting at an El Paso-area Walmart. (AP Photo/John Locher)

Investigators believe the suspect posted a manifesto prior to the shooting to the online message board 8chan. It claims inspiration from the mosque shootings in New Zealand that claimed 51 lives earlier in 2019. In addition, it is anti-immigrant and anti-Hispanic and promotes a white nationalist conspiracy theory called the Great Replacement.

There was a memorial event in El Paso Wednesday morning to honor the victims. Another event was set for 8 p.m. CDT at the memorial site at Ponder Park.

Three years ago a white supremacist drove to El Paso, assault weapon in hand, hate in his heart.

Today we honor the 23 innocent souls taken from us, wrap our arms around the community as we remember, and work to prevent other communities from living this tragedy. #elpasostrong pic.twitter.com/Uhp05m4du7

Democratic Texas Rep. Joaquin Castro called for an end to xenophobia and hatred.

Three years ago, El Paso was devastated by a shocking act of anti-Latino terrorism that left 23 people dead.

Today, we must honor the victims by dismantling hatred and xenophobia and speaking out against those who would erase Latinos from our nation's history. #ElPasoStrong

Texas has seen a great deal of gun violence since the tragic events of El Paso 2019, but none more harrowing than the May 24, 2022, mass shooting at Robb Elementary School in Uvalde.

The shooting claimed the lives of 19 children and two adult teachers. Investigations into the shooting and law enforcement’s response to it are ongoing. 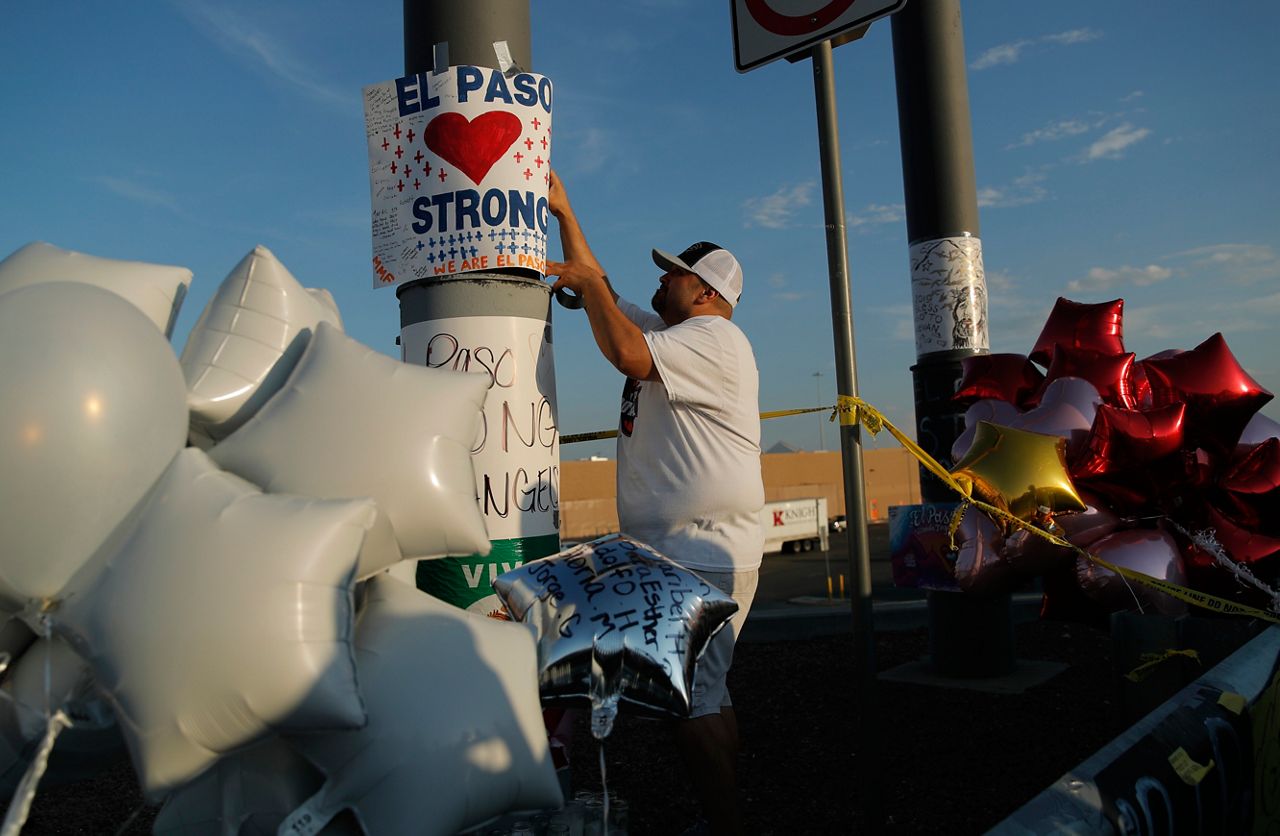 A man hangs up an "El Paso Strong" sign at a makeshift memorial at the scene of a mass shooting at a shopping complex, Tuesday, Aug. 6, 2019, in El Paso, Texas. (AP Photo/John Locher)

In June, President Joe Biden signed a bipartisan gun violence bill into law. It was the first major gun safety legislation passed by Congress in nearly 30 years and calls for the following:

— Expanded background checks: State and local juvenile and mental health records of gun purchasers will be part of federal background checks for buyers age 18 to 20. Three-day maximum for gathering records lengthened to up to 10 days to search juvenile data. If 10 days lapse without resolution, sale goes through.

— “Boyfriend loophole”: Convicted domestic violence offenders denied guns if they have current or past “continuing serious relationship of a romantic or intimate nature” with victim. Abusers’ right to buy firearms restored after five years if no additional violent crimes committed. Firearms currently denied to domestic abusers if they are married, live with or had a child with victim.

— “Red flag” laws: Federal aid to the 19 states, plus the District of Columbia, that have laws helping authorities get court orders to temporarily remove guns from people deemed dangerous. Those states would need strong processes for challenging the taking of firearms. Other states could use money for crisis intervention programs.

— Federally licensed gun dealers: Current law requires people “engaged in the business” of selling guns to be licensed, which means they must conduct background checks. Bill defines that as selling firearms “to predominantly earn a profit” in an effort to prosecute people who evade the requirement.

— Gun traffickers: Creates federal crimes for gun traffickers and “straw purchasers” who buy guns for people who would not pass background checks. Penalties up to 25 years in prison. Such offenders are now primarily prosecuted for paperwork violations.