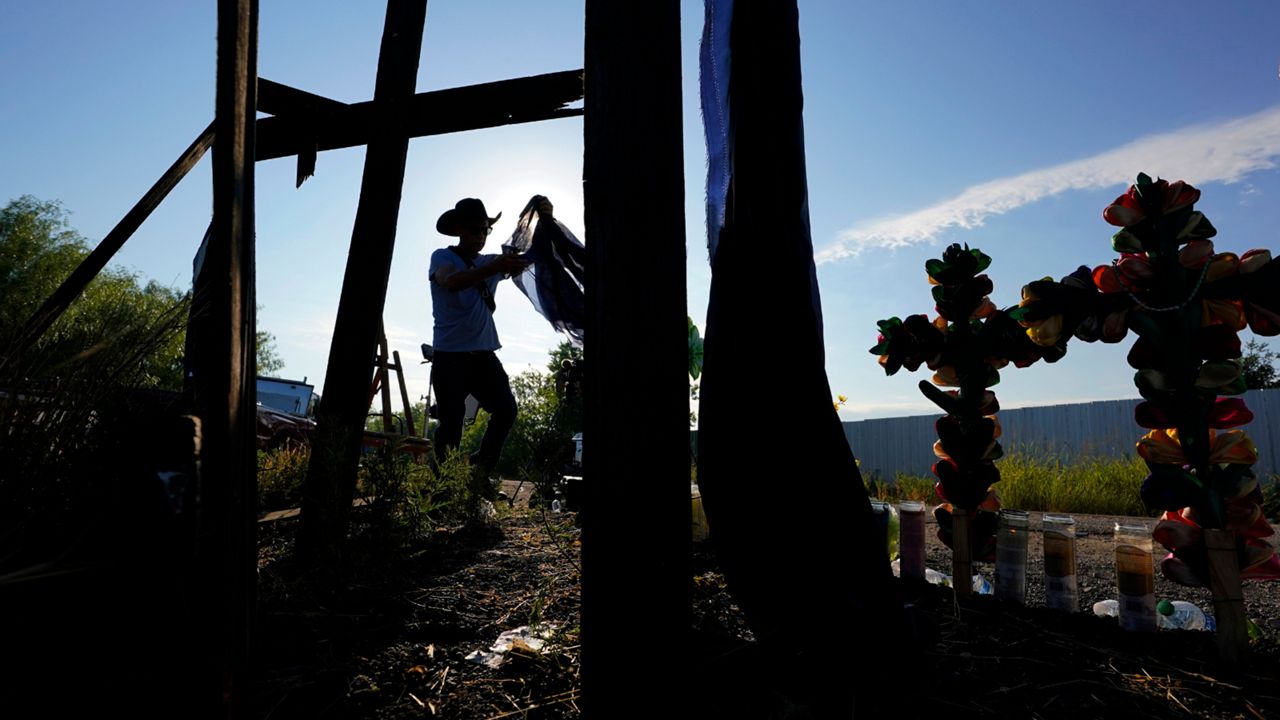 Roberto Marquez of Dallas prepares to drape a cross to a makeshift memorial at the site where officials found dozens of people dead in an abandoned semitrailer containing suspected migrants, Wednesday, June 29, 2022, in San Antonio. (AP Photo/Eric Gay)

SAN ANTONIO (AP) — Fifty-three people have died after being abandoned in a tractor-trailer in the sweltering Texas heat, one of the worst tragedies to claim the lives of migrants smuggled across the border from Mexico to the U.S. More than a dozen people had been taken to hospitals, including four children.

In the chaotic minutes after the migrants were found, the driver tried to slip away by pretending to be one of the survivors, a Mexican immigration official said Wednesday.

The American truck driver, along with another U.S. citizen and two other men, remained in custody as the investigation continued. Federal prosecutors said two of the suspects, including the driver, face charges that carry a potential sentence of life in prison or the death penalty if convicted.

Federal prosecutors identified the driver as Homero Zamorano Jr., 45, who was charged with smuggling resulting in death. Zamorano lives in suburban Houston and is originally from the Texas border city of Brownsville, according to the U.S. Attorney's Office in San Antonio.

He faces the most serious charges along with Christian Martinez, 28, who is accused of conspiracy and allegedly communicated with Zamorano about transporting the migrants.

Martinez was arrested in East Texas and will be transported to San Antonio. Zamorano was scheduled to have his first court appearance Thursday. It was not immediately known if either suspect had an attorney.

Two other men who are not U.S. citizens were also arrested on charges of illegal weapons possession. Prosecutors say investigators found the men at a San Antonio address where the truck was registered.

A city worker heard a cry for help from the truck shortly before 6 p.m. Monday and discovered the gruesome scene, Police Chief William McManus said. Hours later, body bags lay spread on the ground near the trailer and bodies remained inside as authorities responded to the calamity.

San Antonio Mayor Ron Nirenberg said those that died had “families who were likely trying to find a better life.”

“This is nothing short of a horrific human tragedy,” Nirenberg said.

It’s among the deadliest of the tragedies that have claimed thousands of lives in recent decades as people attempt to cross the U.S. border from Mexico. Ten migrants died in 2017 after being trapped inside a truck parked at a Walmart in San Antonio. In 2003, the bodies of 19 migrants were found in a sweltering truck southeast of San Antonio.

The home countries of the immigrants and how long they were abandoned on the side of the road was not immediately known.

South Texas has long been the busiest area for illegal border crossings. Migrants ride in vehicles through Border Patrol checkpoints to San Antonio, the closest major city, from which point they disperse across the United States.

Migrants typically pay $8,000 to $10,000 to be taken across the border, loaded into a tractor-trailer and driven to San Antonio, where they transfer to smaller vehicles for their final destinations across the United States, said Craig Larrabee, acting special agent in charge of Homeland Security Investigations in San Antonio.

Officers arrived to find a body on the ground outside the trailer and a partially opened gate to the trailer. Three people were taken into custody, but it was unclear if they were definitively connected with human trafficking, McManus said at the time.

Of the 16 taken to hospitals with heat-related illnesses, 12 were adults and four were children, said Fire Chief Charles Hood. The patients were hot to the touch and dehydrated, and no water was found in the trailer, he said.

“They were suffering from heat stroke and exhaustion,” Hood said. “It was a refrigerated tractor-trailer, but there was no visible working AC unit on that rig.”

Those in the trailer were part of a presumed migrant smuggling attempt into the United States, and the investigation was being led by U.S. Homeland Security Investigations, McManus said.

Big rigs emerged as a popular smuggling method in the early 1990s amid a surge in U.S. border enforcement in San Diego and El Paso, Texas, which were then the busiest corridors for illegal crossings.

Before that, people paid small fees to mom-and-pop operators to get them across a largely unguarded border. As crossing became exponentially more difficult after the 2001 terror attacks in the U.S., migrants were led through more perilous terrain and paid thousands of dollars more.

Some advocates drew a link to the Biden administration’s border policies. Aaron Reichlin-Melnick, policy director at the American Immigration Council, wrote that he had been dreading such a tragedy for months.

“With the border shut as tightly as it is today for migrants from Mexico, Guatemala, Honduras and El Salvador, people have been pushed into more and more dangerous routes. Truck smuggling is a way up,” he wrote on Twitter.

Stephen Miller, a chief architect of former President Donald Trump’s immigration policies, said, “Human smugglers and traffickers are wicked and evil” and that the administration’s approach to border security rewards their actions.

Texas Gov. Greg Abbott, a Republican running for reelection, was blunt in a tweet about the Democratic president: “These deaths are on Biden. They are a result of his deadly open border policies.”

These deaths are on Biden.

They are a result of his deadly open border policies.

They show the deadly consequences of his refusal to enforce the law. https://t.co/8KG3iAwlEk

Migrants — largely from Mexico, Guatemala, Honduras and El Salvador — have been expelled more than 2 million times under a pandemic-era rule in effect since March 2020 that denies them a chance to seek asylum but encourages repeat attempts because there are no legal consequences for getting caught. People from other countries, notably Cuba, Nicaragua and Colombia, are subject to Title 42 authority less frequently due to higher costs of sending them home, strained diplomatic relations and other considerations.

U.S. Customs and Border Protection reported 557 deaths on the southwest border in the 12-month period ending Sept. 30, more than double the 247 deaths reported in the previous year and the highest since it began keeping track in 1998. Most are related to heat exposure.

CBP has not published a death tally for this year but said that the Border Patrol performed 14,278 “search-and-rescue missions” in a seven-month period through May, exceeding the 12,833 missions performed during the previous 12-month period and up from 5,071 the year before.

"The tragic loss of life in San Antonio, Texas that took place yesterday is horrifying and heartbreaking.  Our prayers are with those who lost their lives, their loved ones, as well as those still fighting for their lives. As always, I am grateful for the swift work of all of the Federal, state, and local first responders.

"While we are still learning all the facts about what happened and the Department of Homeland Security has the lead for the investigation, initial reports are that this tragedy was caused by smugglers or human traffickers who have no regard for the lives they endanger and exploit to make a profit.

"This incident underscores the need to go after the multi-billion dollar criminal smuggling industry preying on migrants and leading to far too many innocent deaths. In Los Angeles two weeks ago, I announced that the United States has launched a first-of-its kind anti-smuggling campaign with our regional partners.  In the first three months, we have made over 2,400 arrests, and that work will only intensify in the months ahead.

"Exploiting vulnerable individuals for profit is shameful, as is political grandstanding around tragedy, and my Administration will continue to do everything possible to stop human smugglers and traffickers from taking advantage of people who are seeking to enter the United States between ports of entry."