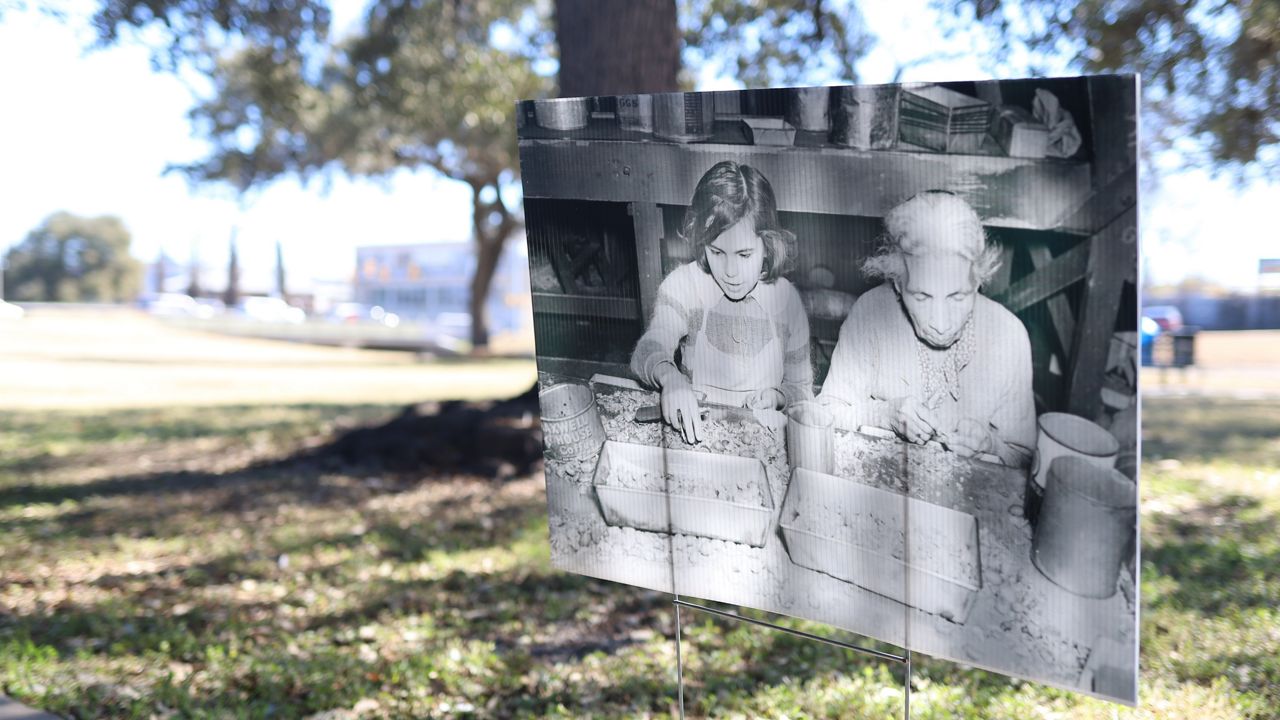 Pictured here is a photo of pecan shellers from the 1930s resting in the grass of Cassiano Park on San Antonio's West Side. (Spectrum News 1/Jose Arredondo)

SAN ANTONIO — It was a typical day at Cassiano Park on San Antonio’s West Side.

You had men hooping, music blasting from “barrio-big-band" Bombasta, and gente (people) ready to celebrate under the pavilion.

They weren’t celebrating a birthday. They were commemorating the anniversary of the Pecan Shellers’ Strike led by Emma Tenayuca.

Tenayuca was a labor leader, union organizer and educator who led the 12,000 pecan shellers, most of them being Mexican American women, out of the factories in 1938.

Alejandra Lopez attended this celebration and is an educator herself, so preservation is vital to her.

“What an honor it is to be surrounded by so many people who are committed to not only preserving the history of worker struggles in San Antonio, but to continue to engage in it so that all working people in San Antonio can lead a life of dignity and respect,” Lopez said to the crowd of people.

Lopez told the attendees she learned about Texas history growing up, but was never taught about Tenayuca.

“I am from San Antonio, I grew up here, I went to public school here and I never once heard the name of Emma Tenayuca taught to me in my class that I was in,” Lopez says.

Teneyuca spoke about learning of her aunt’s legacy.

“After I learned my aunt’s history, I decided that I wanted to learn more of the history. I thought it should be written because she was really written out of history,” Teneyuca said.

Lopez was smiling as both Tafolla and Teneyuca spoke. She relates to Tenayuca’s historic labor movement because she currently sits as president of the San Antonio Alliance of Teachers and Support Personal.

“We sit down at the table with the school district each month to discuss issues that are affecting workers all throughout the district. As you can imagine, during the COVID-19 pandemic our focus has largely been on the health and safety of our staff and our students and their families,” Lopez said.

That’s why Lopez says it’s important to preserve the legacy of Tenayuca because those same battles are still being fought till this day.

"We have seen our working class communities of color bear the brunt of this COVID-19 pandemic," said Tenayuca. "It is important more than ever for workers to come together, to form unions and fight for the dignity and respect that they deserve."