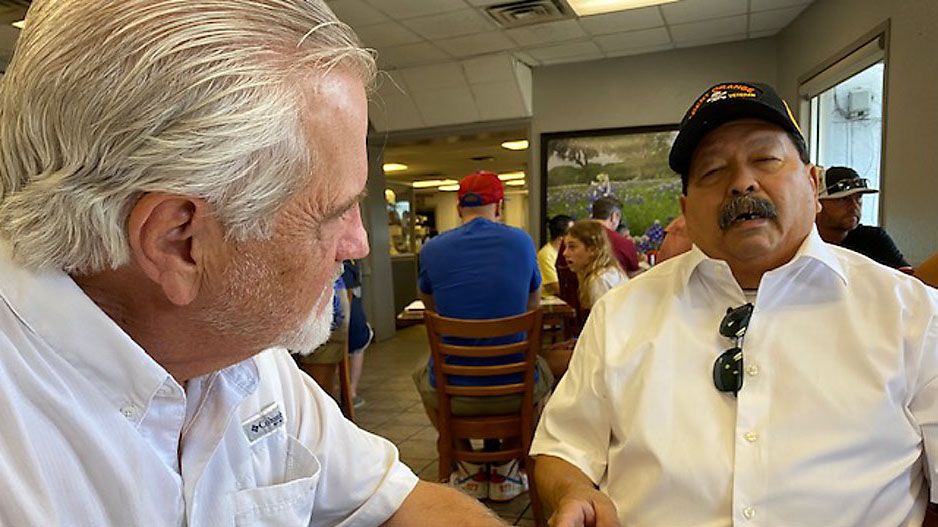 Felipe Gutierrez and Steve Connatser see each other for the first time in 50 years. (Spectrum News 1/Bryan Boes)

50 years later, accident survivor reunites with man who saved him

SAN ANTONIO ― Felipe Gutierrez didn't hesitate after hearing the voicemail left for him on his daughter's phone. He had to know if the caller was real. He called the number back and listened to what the man had to say.

“My name is Steve Connatser," the voice on the other end of the phone said. "I was involved in an accident 50 years ago and was saved from that accident by three men, one of whom was Felipe Gutierrez. Would that be you?"

“That’d be me," Gutierrez said.

As Gutierrez fought back the tears, Steve Connatser realized he had finally found one of the three men he's been trying to find for 50 years.

"I found you? Oh my gosh. After all these years? Wow," Connatser said.

Four days later they were meeting face-to-face for the first time since the accident happened on July 10, 1971. They shook hands and embraced in a hug 50 years to the day of the crash.

“It really never crossed my mind that I’d ever see you or your wife," Gutierrez said.

“You were hard to track down," Connatser replied.

The reunion took place at a cafe in Marble Falls, Texas. Connatser traveled from his home outside of Dallas, while Gutierrez came from nearby Austin.

You would have thought they were old friends reflecting back on the accident and rescue, even though their recollections differed some after half a century.

“I couldn’t get out. Somebody helped us get out of the car," Connatser said.

“It wasn’t us," Gutierrez countered.

The "us" he was referring to was himself and his friend Jay Slaughter.  The two buddies were driving down Route 281 in Round Mountain, Texas, that Saturday afternoon when they saw smoke. Neither hesitated to run toward the burning car and help Connaster and his wife at the time. A third unknown man was also there. That man and Slaughter have since passed away.

After a breakfast full of laughs, tears and many memories, Connaster and Gutierrez hopped in the car. They made two stops before the day was over.

The first stop was the family gravesite of Jay Slaughter. Connaster wanted to say thank you, even though Slaughter lost his battle with cancer two years prior.

"Hell, I'm still living because of you and him," Connatser said to Gutierrez as they stood at the base of Slaughter's grave.

The final stop was six miles down the road where the accident actually occurred. The moment was emotional as Gutierrez's family looked on from a distance.

“I just always knew my dad was a hero. So to me, he was my hero," Amanda Gutierrez said. "But then I found out he was somebody else’s hero before me. People should know this story.”

Now, thanks to Connatser, people will know the story. They will know what happened right there on route 281 in Round Mountain. They will know how three men’s selflessness helped save two lives, and forge a friendship that will last forever.

“We are brothers," Connatser said while clasping Gutierrez's hands.