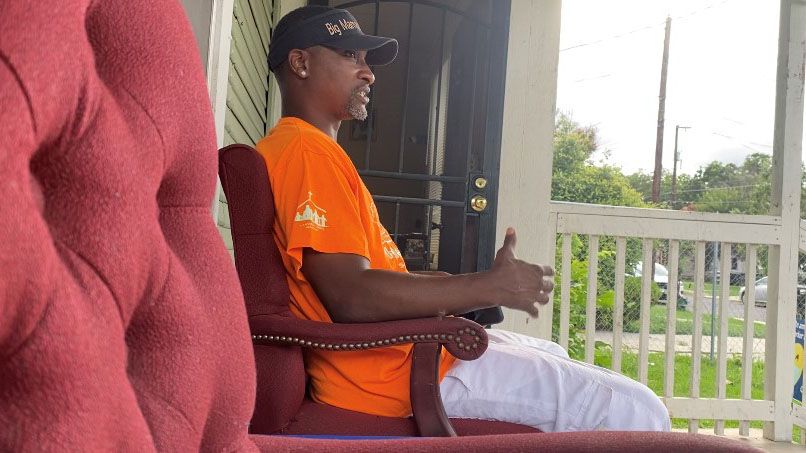 SAN ANTONIO — A former San Antonio gang member decided against a life of crime after he was released from prison and is now helping the same community he used to terrorize.

Bennie Price can walk out the front door, and sit on his front porch in peace, but it wasn’t always that way. Price started selling drugs at 11. He bought his first gun around 13, and he killed a man at 16.

“I was sentenced almost to 100 years in prison. Went to prison, did 23 years, and in 2012 I had a God experience. The Lord gave me a vision about sending me back to the neighborhood I used to tear up, I used to terrorize,” said Price was paroled in 2012.

He’s back on those same streets now, but has a new affiliation.

“It’s a feeling that I could have never possibly ever dreamed of having. Being able to sit here so many years later,” said Price.

“I tell ‘em we was lied to. They have been lied to. And I’ve come back to tell them the truth. That you can be somebody. That there’s more to life than your neighborhood,” said Price.

He says he does the work for the children growing up here, but in honor of his family’s matriarch: his late grandmother.

“My Big Mama was probably the best person in the world and taught us right. But when we went outside her house, it was a totally different world. So it was kind of hard for her to win that battle against the world, because it was basically only her,” said Price.

Big Mama’s Safe House is an organization that mentors young people off the streets. Inside Big Mama’s safe house is a simple set up to process complicated documents. The organization is taking on 200 applicants; people who need help paying utility bills or rent.

“Due to the pandemic, people are still suffering. They’re still trying to recuperate,” said Rose Williams an employee at Big Mama’s Safe House. “Not everybody has a computer. Sometimes they don’t speak English, right? Or they’re elderly. So, we physically assist them. We just tell them to bring the documents and we do everything,” said Williams.

Price says sometimes this is what the work looks like. Offering help when no one else will and he says it’s paying off.

“So many people have gotten approved, you know a lot of them within days,” said Price.

He believes he’s helping to break the poverty to crime cycle.