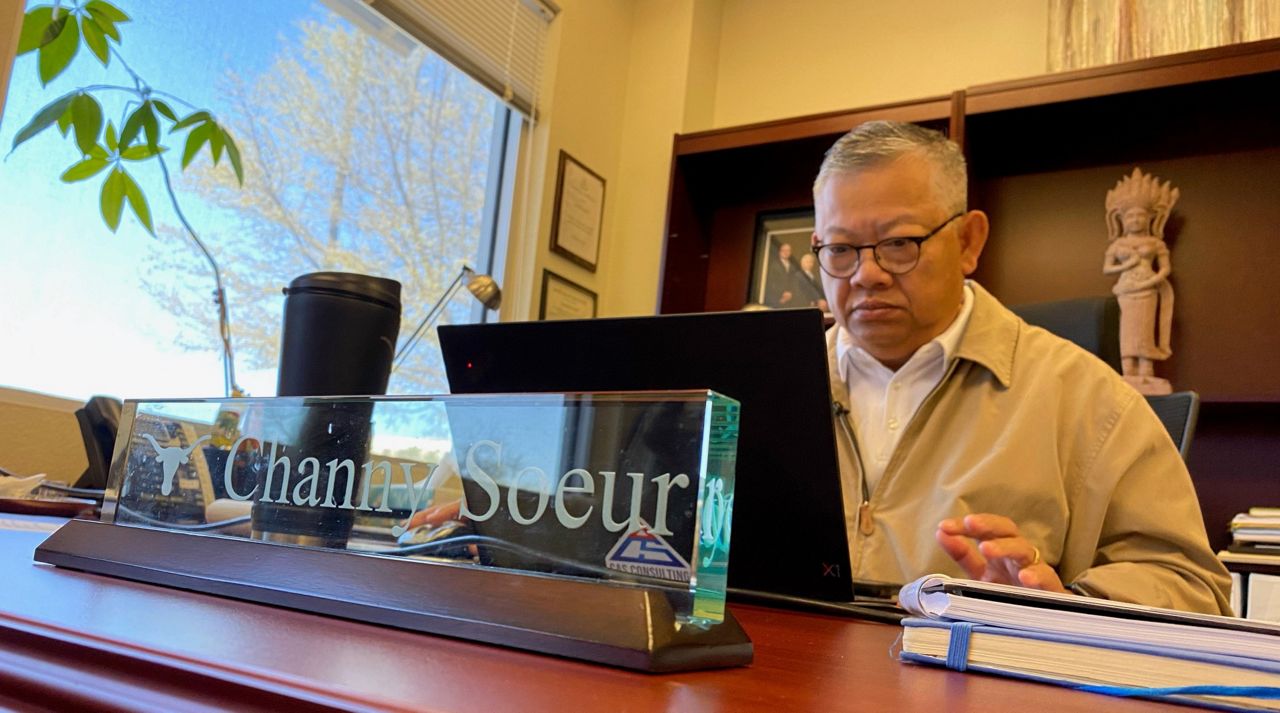 Breaking The Silence: Asian Americans in Texas Come Together to Denounce Hate Crimes

AUSTIN, Texas — The Asian American community in Texas is demanding action from state and local leaders following a series of violent crimes against Asians across the country.

While Asian Americans are the fastest-growing demographic in Texas, according to U.S. Census data, a national survey found Texas ranks fourth in the country for the most anti-Asian hate crimes.

After a white man in Atlanta shot and killed eight people, six of whom were Asian American, Austinite Channy Soeur decided enough was enough. Gathered together with his friends and family, he shared an authentic Cambodian meal, and authentic conversation about their experiences with discrimination living in Texas.

His wife, Laura Soeur, was the only white person at the dinner table of six. She says she came from a very racist family and it wasn’t until college, when she started dating Soeur, that she realized how different the Asian American experience was compared to hers.

She says her husband deals with racism on a daily basis. She told the group about her experiences with the police.

“He gets stopped for, you know, parting his hair wrong,” she said. "He gets stopped all the time. Everything you could think of, they would give him a citation for, and I get away with a lot of stuff.”

Everyone at the table said they deal with racist remarks and discrimination on a daily basis, but it’s part of Asian culture to stay silent. Soeur says this is because they come from a country with an oppressive government and because of the language barrier.

“We just don’t want to say anything because it creates stigma that we are victims,” he said.

This is the reason Soeur decided to organize the Asian American community in Texas to speak up and break their silence about anti-Asian hate.

The civil engineer put together a virtual news conference with Asian American leaders, law enforcement, city and state leaders, and members of the press to discuss how to report and combat discrimination.

He discussed five plans of action:

The Stop AAPI Hate Reporting Center received 3,795 reports of anti-Asian hate crimes from March of 2020 to February of 2021. In Texas, the number was 103. However, because most Asian Americans don’t report it, this is only a fraction of the hate crimes that actually occurred.

“If we don’t report it, how will we know it’s happening?” Soeur said.

Greater Austin Asian Chamber of Commerce CEO Fang Fang says businesses are easy targets for hate crimes. Asian Americans are the fastest-growing demographic in Austin, making up around 8% of the population, which has now surpassed the Black population in the city.

“A lot of them came here for jobs, right, we are like, tech hub, where a lot of new jobs brings people here and a lot of high-tech companies have a lot of Asian employees and Asian business,” Fang said.

Fang says the chamber membership is constantly growing with about 700 members and nearly 2,000 representatives. She says the best way to support the Asian business community is with your dollar.

“Support their businesses. If you having a business, do business with Asians, hire Asian employees,” she said.

She adds that treating Asian Americans like any other neighbor is the most powerful way to show your solidarity.

And for Soeur, the best weapon against ending hate crimes is your voice. Because, he says, if hate crimes aren’t being reported, we can’t protect our community.

“If your work place and the place where you live is not safe, then where do you go?” Soeur said.

CORRECTION: A previous version of this story misstated the number of Asian Americans killed in the shooting rampage in the Atlanta, Ga., area. The error has been corrected. (March 24, 2021)