AUSTIN, Texas – A standoff between the City of Austin and a Black revolutionary group is now over, after about three and a half weeks of the group occupying a park in East Austin in protest of a recent police shooting.

In a statement released Thursday evening, Austin City Manager Spencer Cronk said, “Staff from our Parks and Recreation, Resource Recovery, and Code Departments worked with the community to ensure that once this group had registered their protest, the portion of the park they occupied was returned to full public use. We hope to maintain this constructive dialogue as we continue working to improve the lives of all Austinites.”

Black revolutionary group 400+1 began occupying East Austin's Rosewood Park on February 14, in protest of the death of 21-year-old Jordan Walton, who was shot and killed by the Austin Police Department's SWAT team. 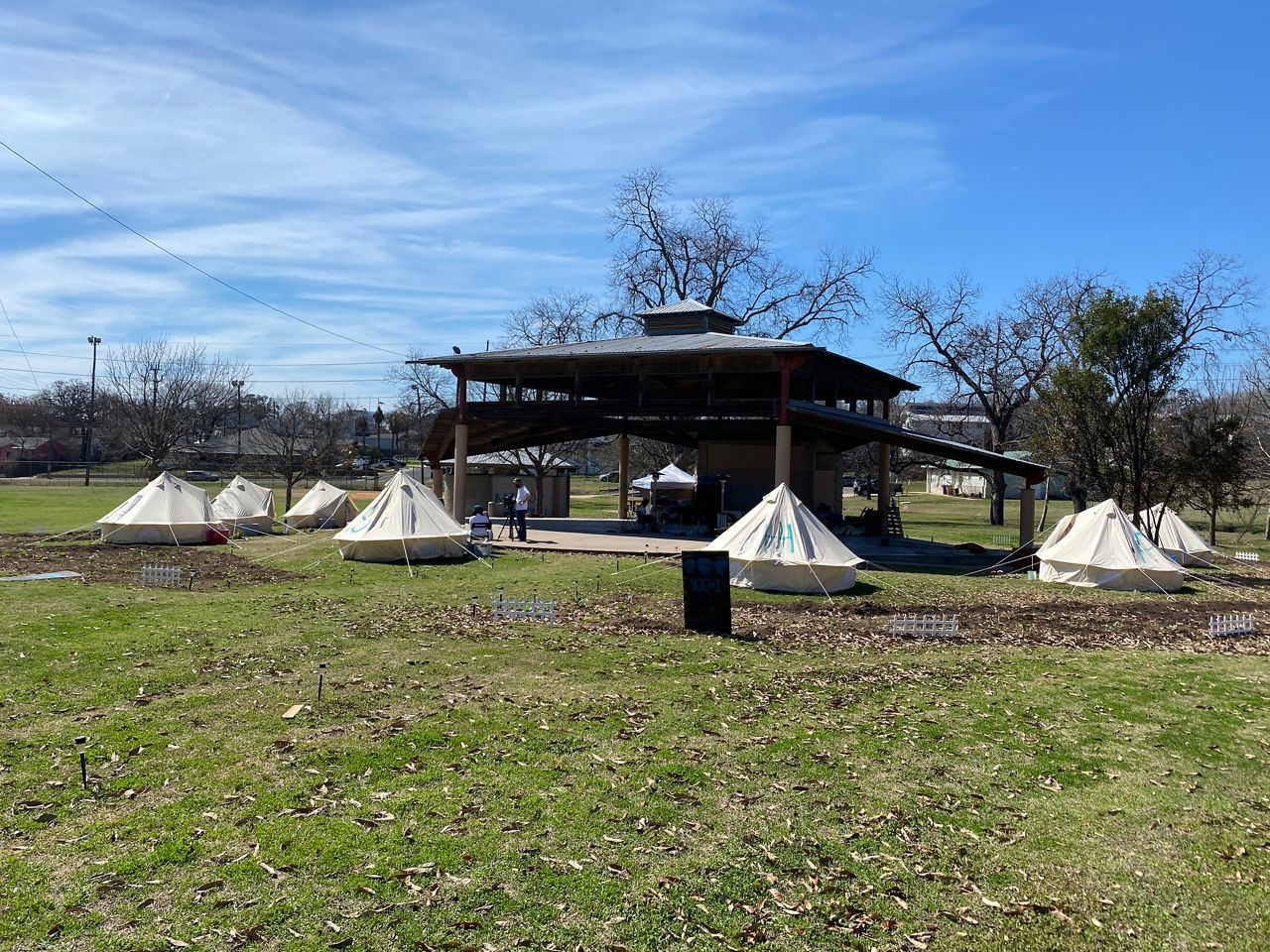 According to the Austin Police Department, on February 10 Walton crashed a car into a house in East Austin, then broke into a nearby home and fired at officers when they tried to enter. Police say they shot and killed Walton when he came out of the house holding a child hostage.

But the group protesting the shooting says that’s not the full story. According to them, Walton’s family was in contact with police during the incident, informing them he was having a mental health crisis.

APD has not yet released the body cam footage of the shooting. According to APD policy, videos of critical incidents, including officer-involved shootings, are to be released to the public within 60 days.

400+1 claims that police have not been transparent with the public or Walton’s family about the details surrounding his death. On February 14 they responded to the shooting by setting up tents in East Austin’s Rosewood Park, naming it "Jordan's Place," in Walton's memory.

In an interview with Spectrum News 1 reporter Niki Griswold on March 4, 400+1's co-founders said they declared "Jordan's Place" to be the capital of an area they declared as an autonomous zone they named "Orisha Land." They said even though the city was pressuring them to leave, they were determined to stand their ground.

“We’ve got like a place to sleep here,” said Dubb, a member of the group 400+1, gesturing towards one of the many tents the group had set up around the Rosewood Park pavilion.

Beginning on February 14, the group used the tents to provide shelter for people experiencing homelessness.

Along with the tents, 400+1 set up a compostable toilet, generator-powered refrigerator, a storage area for bottled water and non-perishable food, and a sitting area with a couch and chairs.

400+1 said though that the area was more than just a campsite.

“We’re reclaiming space for Black folks to be safe, and to feel like they can exist here without the constant assault of gentrification, of excessive force of police brutality," said Njera Keith, one of 400+1's co-founders.

“Austin Police Department has continued to enact violence against the Black community here, against all communities, poor and marginalized communities here in Austin. They are protecting the interests of capital, and not prioritizing life. So we are making a stand," said Kristina Brown, 400+1's other co-founder.

The president of the Austin Police Association says it’s not that simple.

According to the Austin Police Department, an officer shot and killed Walton while he was holding a woman and child hostage.

“You can say that the laws don't apply to you but in the end they do," said Ken Casaday, president of the Austin Police Association. "I respect them protesting, you know, but I think they're protesting for the wrong reason and using the wrong situation. We can talk about other officer-involved shootings that have happened but ... that day those officers were heroes and did a fantastic job.”

“400+1’s stance is that no one under any circumstances deserves to die at the hands of the police. The police cannot be judge, jury, and executioner," said Keith.

400+1 says part of the occupation effort included delivering resources like food and water to low-income communities of color during and following February’s historic winter storm.

On March 3, the City of Austin posted a notice saying the site is in violation of multiple city ordinances, giving the group one day to clear the area. 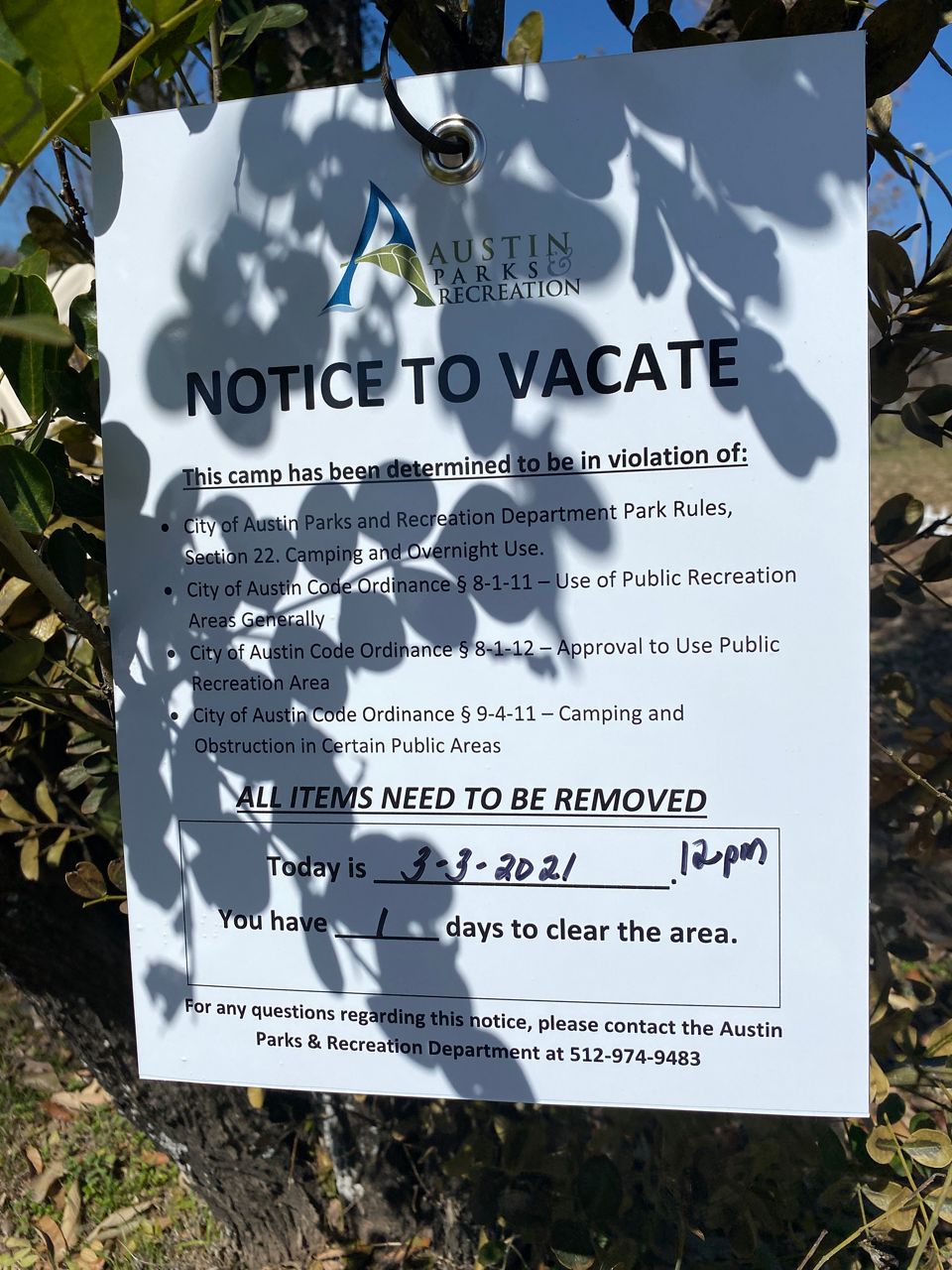 A notice posted by the City of Austin at Rosewood Park instructs 400+1 to vacate the area. (Spectrum News 1/Niki Griswold)

In an interview with Griswold on March 4, Keith and Brown said they not only had no intention of leaving, but were prepared to defend their occupation.

“As folks are wondering, what we will do? The answer is whatever it takes. We're not going anywhere, we understand that there are going to be consequences, we're aware. And we're prepared to face the repercussions of our actions, because this is deeply important. Jordan's life mattered," said Keith.

By the evening of March 11, the City of Austin confirmed that the area of the park 400+1 had been occupying was again accessible for full public use.

So far, Spectrum News 1 has not heard of any conflict during the removal of the tents.