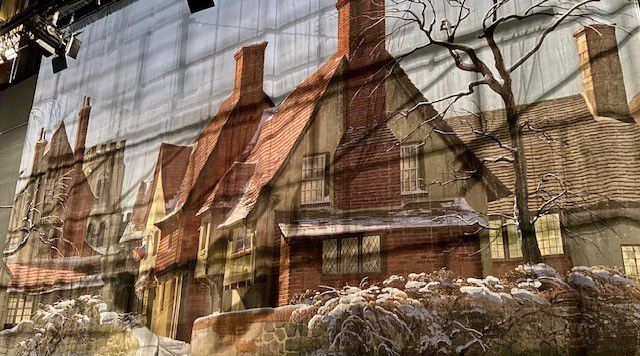 AUSTIN, Texas — When she’s not teaching painting, you’ll find Karen Maness putting the finishing touches on her own works of art.

Maness teaches at the University of Texas in Austin, but the paintings she works with at UT are Texas-sized! They’re old movie backdrops Maness helped acquire from MGM, now housed at UT.

“We have 50. That has everything to do with my deep love for this subject and my intention to continue to tell the stories of the history of the artists who created these works, said Maness.

Of the 50 backings, as they’re called in the biz, about a dozen will go on display to the public.

What’s also extraordinary are the fine details. MGM actually lit the backdrops from behind to make it look like light was shining through.

“It’s like turning on a lamp, and the lamp shade glows. The same idea her; the fabric diffuses the light and helps it glow evenly,” said Maness.

You could say Maness wrote the book on backdrops. Her and co-author Richard Isackes’s book The Art of the Hollywood Backdrop chronicles some of the same backings now at UT. For Maness, it’s about passing on an old art form to a new generation.

“These backdrops are going to give our students who are studying scenic art an unprecedented opportunity to learn from the masters,” said Maness.