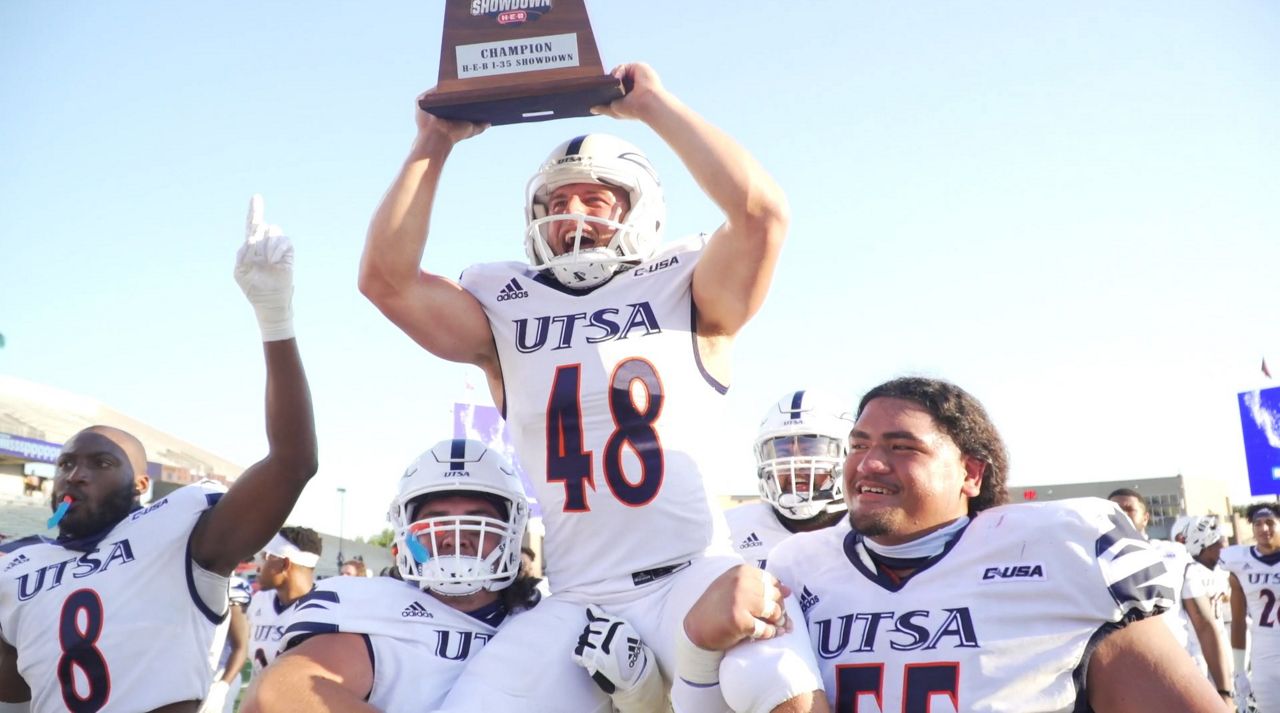 SAN ANTONIO — Hunter Duplessis was skeptical about his chances in college.

“I wasn’t a traditional kicker. My steps were weird, my follow-thru was weird,” said Duplessis. “I really didn’t know if I was any good. I didn’t know what to compare it to.”

His path to football was unconventional, but it turns out he’s right at home on the gridiron.

The University of Texas at San Antonio senior earned First-Team, All-Conference USA honors this season. He was also a semifinalist for the Lou Groza Award, which is given annually to the best place kicker in college football.

That’s not bad for a kid who didn’t even try out for football until his senior year at Robert G. Cole High School.

“We started with like a PAT distance and then bumped it back like five or 10 every single kick,” Duplessis said. “Eventually, we're kicking from about 55 yards.”

Duplessis was a life-long soccer player. Soccer players come out to kick for their high school teams all the time. Most of those kickers don’t think about playing on Saturdays.

“I mean, the very first kick I saw, he made,” said Ronald Dement, a former assistant football coach at Cole. “I thought, wow, we got something here.”

“We will tell you straight up, I don’t think you’re going to play Division-I football,” said Duplessis about his feedback on the prep kicking circuit. “My dad and my parents weren’t paying all this money to a super camp and hadn’t been over the years. I was the new kid on the block.”

Working with Chris Shaw took Duplessis’s career to the next level.

“He's very humble. He's very focused and driven, and he just wanted to get better,” Shaw said. “He wants to be fed all the details so he can go quietly prove to everyone that, you know, he was going to be good.”

Shaw is a special teams consultant and the founder of Kick Nation. He’s worked with UTSA specialists since the program’s inception.

“He literally checks in with me every single week and won’t blow smoke about what I’m doing and where I am at,” Duplessis said. “I think I was looking for something like that, and it inspired a lot of confidence in me.”

Honing his craft has paid dividends. The former walk-on was put on scholarship in 2019, his first year as the starting place kicker.

“When he told me he had a scholarship, I thought, well, it's about time because you deserve it, and you put all the work in that you need to do it,” Dement said. “If all of my athletes, and students and everybody could take something from Hunter, it would be that.”

It's a work ethic that’s going to stay with Duplessis no matter what his future holds.

“We know we have options in many different directions,” said Duplessis. “I do know that I love UTSA. I've loved my time there and especially this season, so I wouldn't be opposed to coming back.”