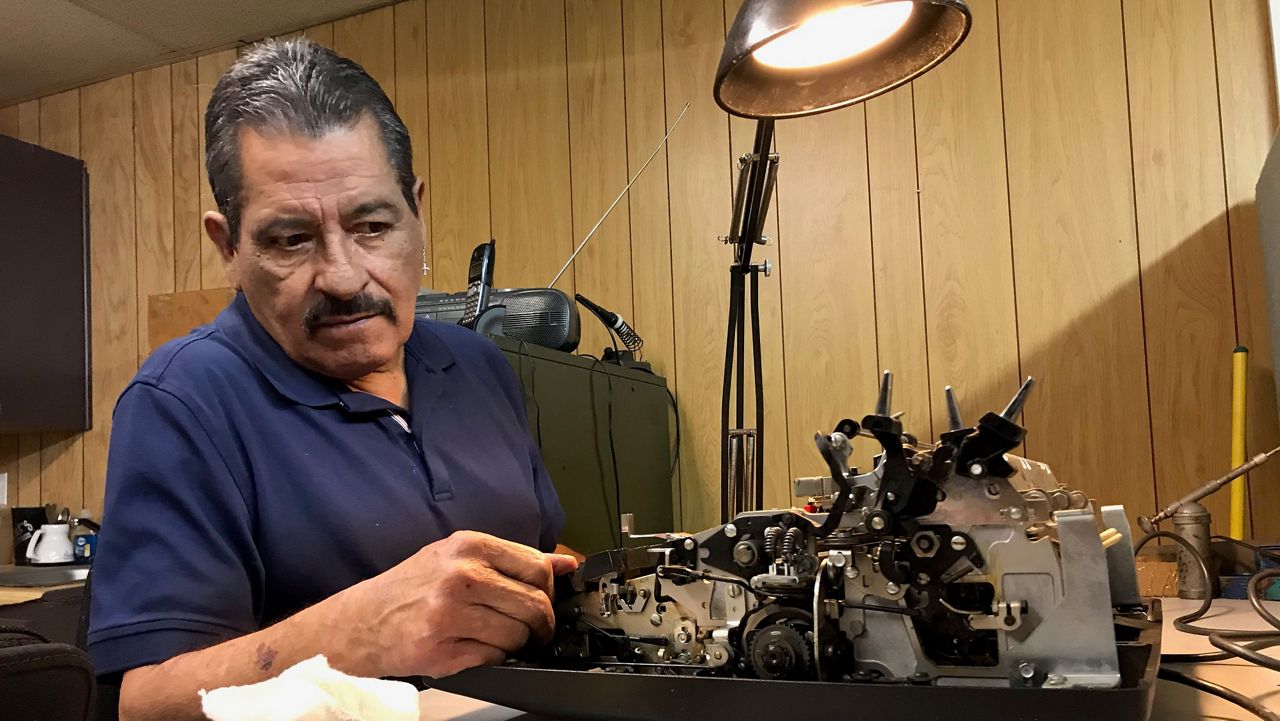 AUSTIN, Texas — One might assume all of the advances made with modern technology would have rendered the typewriter useless. But typewriter repairman Steve Munoz says the typewriter is making a comeback.

“They’re finding them in the attic, in their garage, their grandmothers’, their grandfathers’ and they refurbish them. They like the sound,” said Munoz, as he punches keys on an old Remington manual typewriter.

Munoz is the owner of Duncan Munoz Office Machines in Austin. He was just 20 when he started as a typewriter “delivery boy,” a job he got through his brother.

“Back in the day, if a technician couldn’t fix a machine at the location, they’d say 'we’re going to have somebody come pick it up'. That was me,” recalled Munoz.

Forty-three years later, Munoz is still repairing typewriters. He’s the only one left in the game in Central Texas after two other competitors got out of the business. One had health problems that forced him to retire, and the other worked for a company that switched its focus solely to computers.

He’s also the only one who still carries typewriter ink and correction ribbons after big-box office supply stores stopped offering them. It’s brought an onslaught of business, which he says is good, but sometimes daunting.

“I’ve been able to manage, but I could always use a hand,” said Munoz. “But there’s nobody out there.”

There is nobody out there to learn the intricacies of each machine, according to Munoz. He says he’s reached out to local high schools in the hopes of recruiting an apprentice, but he admits there’s a lot involved. He holds several training certificates from companies like Brother, IBM, Adler and Royal.

Munoz specializes in the IBM Selectric, an electric typewriter that was manufactured in Austin. The heavy piece of equipment was a mainstay in offices across the country.

“I think it was the ‘80s, they informed us that the typewriters, particularly these IBM Selectrics will be obsolete in 10 years,” chuckled Munoz.

The typewriter never went away though. Many of Munoz’s customers are older regulars, some who never transitioned to the computer. Even as many of the older customers retire, those that have taken their place only know how to do their work on the typewriter.

Professionals like lawyers, doctors, certified public accountants make up a lot of Munoz’s clientele. Munoz says many have held onto the IBM Selectric and are starting to reinvest in the old technology in order to make sure their confidential documents stay confidential.

“You can’t hack anything that’s on a typewriter,” said Munoz. “You type it, make copies and then shred it, and that’s it.”

Munoz has drawers full of hundreds of parts for the Selectric, some of which he can still get from a supplier in Dallas. But Munoz says it’s the manual typewriter that’s truly gaining popularity as of recent, especially with more creative types.

“The writer just loves the sound and the feel,” said Munoz. “He gets more out of it than just on a computer.”

Never mind a typewriter can’t crash and lose your work; it also doesn’t have the distractions of the internet. But parts for manual typewriters are obsolete.

“You can’t get parts for them, they may not even work,” said Munoz.

Munoz says the ones that don’t work just end up as conversation pieces on display in a home or office.

He has a “graveyard” of junked typewriters he uses for common spare parts, in an attempt to save the manual typewriters he can. At one point he had accumulated over 500 typewriters taking up the space next to his unassuming repair shop, but Munoz said it wasn’t worth it to pay rent just for storage. He stripped the majority of them, maintaining a collection of about 40-50 machines.

There was never a point where Munoz thought his business would end up in the “grave yard” though; Munoz diversified his services. He repairs cash registers, printers and copying machines. He says up until a few years ago, 75% of his business was focused on the printers and cash registers. Now Munoz says his focus is back on the typewriter, making up nearly 65% of service calls and repairs he’s making today.

“You know that ‘what goes around, comes around’ cliché - if you will? That’s a good case right here,” he said.