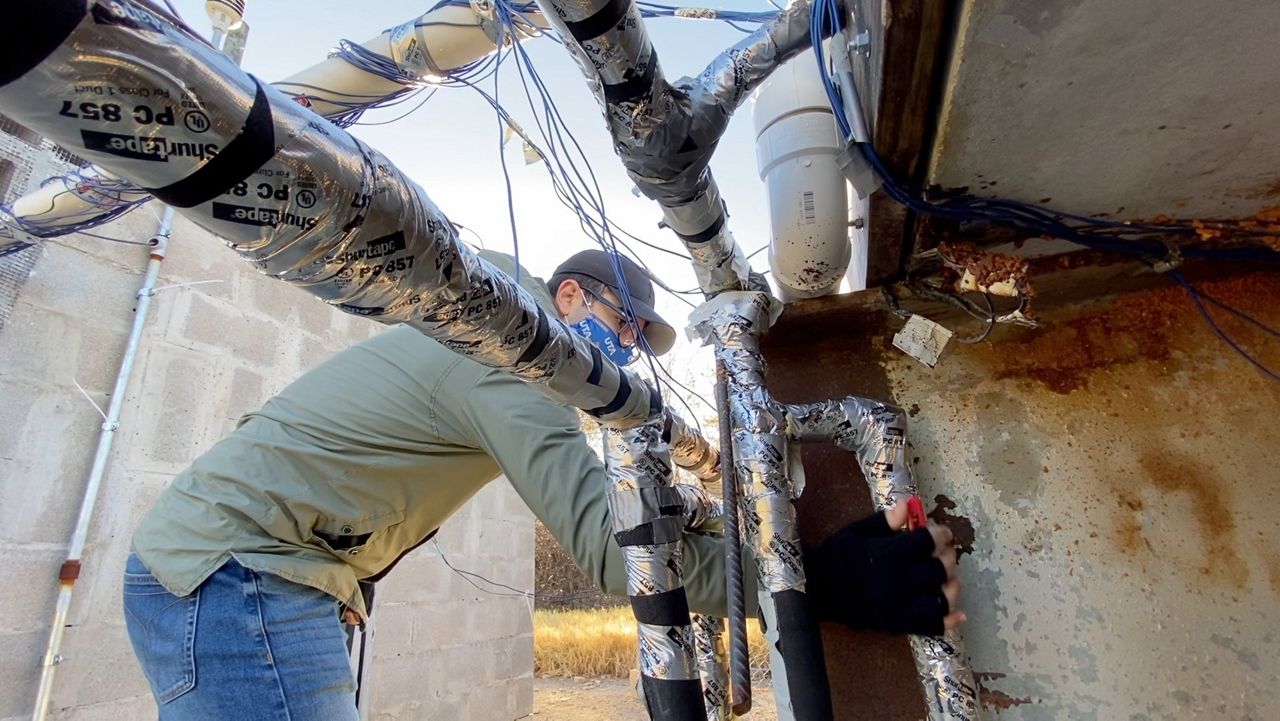 ARLINGTON, Texas —Saving lives and the environment is the goal for a team of researchers at The University of Texas at Arlington using geothermal energy to melt the black ice that makes bridges dangerous.

Every winter when North Texas bridges become slick due to freezing temperatures is a reminder for Professor Xinbao Yu that one day his research will pay off. As an associate professor of civil engineering at UTA, he leads a group of student researchers working to put an end to the dangerous driving conditions ice on bridges and overpasses created for drivers.

His research has been a success and Yu’s team recently earned $100,000 in funding from the Texas Department of Transportation (TxDOT) to be used to advance testing on a new design for geothermal loops under the bridge-deck at their test site in Arlington.

“I always tell my students, we are doing research because we are curious,” Yu said. “We’re curious about how things work. We’re wanting to find a theory to explain how it works and make it work better.”

Professor Yu believes the money will be put to good use benefiting the cost/benefit analysis and an environmental impact survey at the test site that replicates a bridge's construction.

“Our bridge model is very close to the real bridge.” said Yu. “The thickness of this bridge deck is about eight inches.”

Yu says their geothermal de-icing systems use groundwater pumped through a circulation pipe that forces thermal energy from underneath the earth’s surface. One end of the circulation pipe is rooted in the bridge deck to warm the concrete.

“The heating loops are almost like a heating pad,” said Yu. “They warm up the bottom of the bridge and the heat transfers to the surface of the bridge. That keeps the bridges surface warm above freezing. That’s why we call it a heated bridge.”

One of the researchers under his guidance is Ph.D. candidate with UTA’s Department of Civil Engineering Omid Habibzadeh-Bigdarvish. He’s worked on the project since 2017 and has published multiple academic articles on the team's findings using the geothermal method.

“There are a lot of projects that basically focus only on the theory, but this project focuses on the application,” said Habibzadeh-Bigdarvish. “You can see the benefit, and basically what it can do to impact people's lives. So, it’s very interesting to see the application of your work in real life, not only on the papers and the academic aspect.”

Habibzadeh-Bigdarvish says the testing site doesn’t always get the real weather conditions needed to conduct their experiments. Since snow in North Texas isn’t always consistent, they came up with the solution of making their own using a snow gun.

“So, with that we can we can create snow and ice on our bridge deck and see how our system is performing. In all of the tests we were able to de-ice the surface completely.”

Both Yu and Habibzadeh-Bigdarvish are passionate about the project because of the environmental benefit this science provides. The de-icing salts and chemicals currently used to melt roadway ice can lead to polluted soil and water. They say here in the United States road salts are a major culprit for elevated chloride levels in ground and surface waters and in many urban streams.

“So our system, what we are doing here is to prevent the pollution that has happen before, also promote renewable energy at the same time solving the problem of ice and snow on our bridge decks,” Habibzadeh-Bigdarvish said.

Dr. Anand Puppala from Texas A&M is the co-investigator on this project. He’s Yu’s former colleague who led the project before Yu. Yu says part of his work is on the environmental impact-study to address the leakage impact from the heating fluids, a mix of glycol and water. He says a leak is not likely to happen, but they’re studying it as “what-if '' scenario.

After years of research Professor Yu says he’s very proud of the work he and Puppala, along with their current and former students like Habibzadeh-Bigdarvish have accomplished. He hopes this technique could be put to use on traffic bridges in North Texas within the next couple of years.

“I’m still working with TxDOT,” said Yu. “It’s for them to make this call, to evaluate this technology, and if they think everything is ready for the next phase of this research, we’re going to implement this system on a real operating bridge.”

If you have an interesting story or an issue you’d like to see covered, let us know about it. Share your ideas with DFW reporter Lupe Zapata: Lupe.Zapata@Charter.com ​