Matthew McConaughey Recognizes Carter’s House During “With Thanks” Campaign

DALLAS – In its first year, Carter’s House served 20 children. Now, as 2020 comes to an end, the South Dallas non-profit organization has helped around 7,000 people with low-cost clothing and, in doing so, landed on actor Matthew McConaughey’s radar as part of Wild Turkey’s “With Thanks” campaign honoring local legends.

“It feels almost kind of surreal,” said Carter’s House founder, Shawana Carter of the recognition. “I’ve done this work for so long and it’s not that I don’t think that I deserve to be honored, but it’s just one of those things where you are like it feels good for somebody to say, ‘hey, you’re doing a wonderful job’. It feels amazing.”

Carter, who dubbed herself the chief hope dealer of Carter’s House, was among four national honorees, with other recipients in New Orleans, Chicago, and Austin. Wild Turkey, a bourbon brand, shines a light on those doing extraordinary work in their respective communities. Last year, McConaughey and Wild Turkey provided 800 turkeys to first responders battling wildfires across California to thank them for their rescue and relief efforts to those impacted by the natural disaster.

“Each year, across the globe, Wild Turkey and I team up and give thanks to amazing folks who have given back to their communities with unwavering conviction,” said McConaughey, creative director of Wild Turkey. “This year, we want to shine a light on four heroes across the country that have gone above and beyond during this pandemic. We’re calling them local legends.”

Pulling from her own family’s personal experience birthed the 501(c)(3), according to Carter. Years ago, Shawana and her family found themselves homeless and living in temporary housing until they were able to find some financial stability.

“My husband at the time, and myself were separated and had got back together,” she said. “We found ourselves financially tapped out. So, we found ourselves living in a motel with three of our four children for about four months. When we finally got on our feet, we got a small one-bedroom apartment.”

Despite gaining some financial freedom, Carter says she still struggled to get some essential items like school uniforms for her children, especially her son, who was already wearing pants in adult sizes. So, she says, she looked to her parents for additional assistance since her children’s school district could only do so much to help.

“I knew I didn’t have any money to buy school uniforms,” she said. “I had two kids who were in school. One was an eighth grader and one was a first grader.”

It was at that moment that Carter talked with God about where her life was headed next.

“I have a moment of clarity where I ask God, ‘so, what do you want me to do for the rest of my life?,” she recalled. “I was like, let me figure this out now, so I don’t have to reinvent myself at 50, and this is what he told me.”

Since then, her mission has been to “impact lives in any way, shape, form or fashion.” Founded in 2013, Carter’s House provides low-cost clothing to students and their families who don’t meet the housing criteria set forth by assistance programs in various school districts. Prior to moving to the Martin Luther King Jr. Center, Carter’s House operated out of two storage units in Irving. During its first year in the impoverished community, Carter’s House served 1,600 children and families.

“We’ve made South Dallas Home and I love it dearly,” Carter said.

Pushing through the pandemic

Once the pandemic hit, Carter had to shift operations, with her office in the city-owned Martin Luther King Jr. Center. The city shut the building down in March. Though a stumbling block, it was not a deterrent for the community leader as she found another way to offer aid to others in a time of need.

“My friend has a mobile diaper pantry,” said Carter. “So, I was like ‘look, let’s bundle up with the diapers. So, I brought all of my diapers and I brought my wipes.”

Carter and her community partners hosted multiple community distributions for families and expecting mothers from March to June. As she waited to learn more about the effects of the novel coronavirus on clothes, she halted donations for fear of passing along the deadly virus to others. Eventually, Carter’s House reopened in an office space in Park South YMCA, once Carter realized the virus didn’t live on clothes as she initially thought.

“It allowed us to reconnect with our customer base and find out how they’ve been,” she said, adding she missed her clients. “I’m huge on hugs, so it’s really killing me right now that I can’t hug my people. We’ve been living off air hugs.”

Although it was different from previous years, Carter’s House still hosted their back-to-school event – the largest gathering for the organization. Additionally, they helped organize the Sunny South Harvest Festival, which included something for all ages. Carter’s House also did a giveaway that supplied hundreds of children with blue jeans and tennis shoes. In expanding their services, they created The Village Support Group in April – an environment that affords parents the freedom to express themselves.

“I just wanted to give them a safe space that allowed them to come in and say ‘today, was a rough day as a parent and I don’t love my kids any less, but I’m tired,’” Carter said. “Sometimes as a single parent, we don’t have a support system. We don’t have anywhere to go and say that.”

The support group meets monthly on Zoom, the video-conferencing platform, to openly talk about various topics ranging from parenting to romance.

“We want our parent support group to become one that is commonly known,” said Carter. “We want it to become something people feel comfortable saying what they want to say and not feel like there’s any judgment. We just want to make sure that we’re impacting lives and making people’s lives better.” 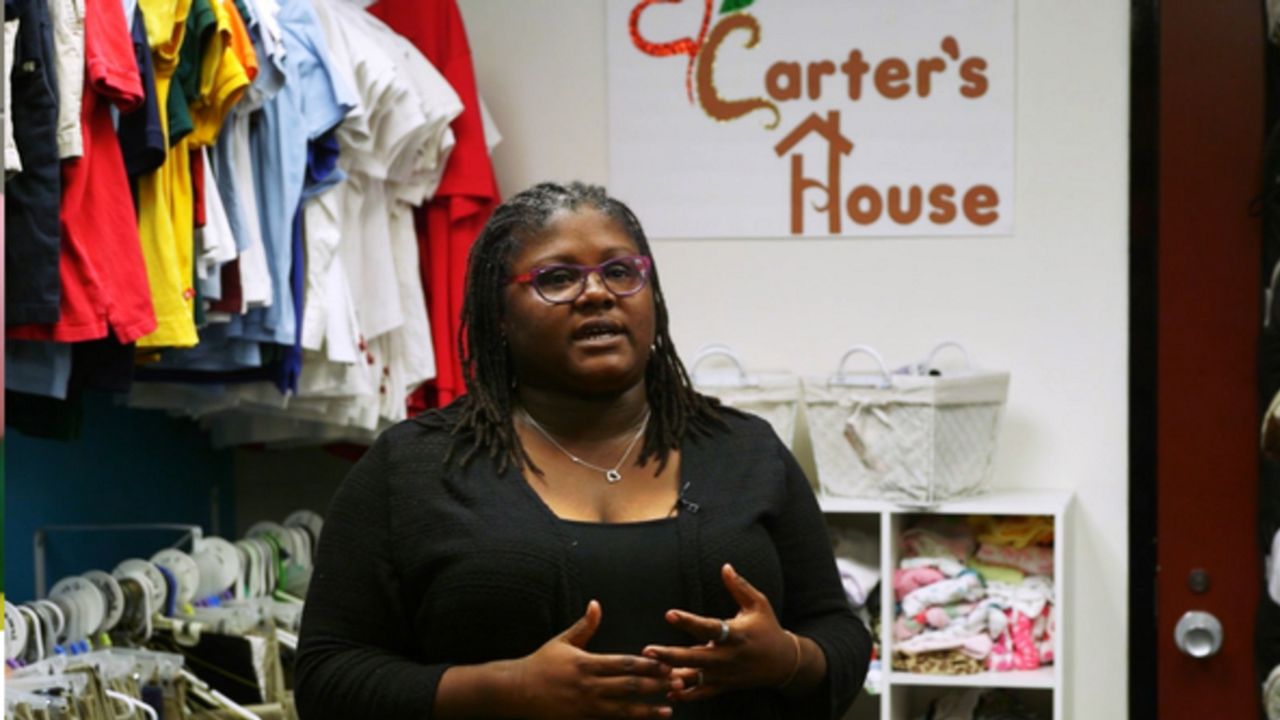 Carter, who wasn’t aware that McConaughey would be on the video conference call, beamed with joy when she saw the actor’s face appear on the screen.

“Oh, my God,” she yelled, covering her mouth.

McConaughey thanked Carter for her desire to help others, especially during a critical time such as the pandemic.

“Thanks for spending time with me today,” McConaughey told her. “I’m calling to say ‘thank you.’ Myself and Wild Turkey are shining a light on what we call local heroes and you, ma’am, are obviously one of those people.”

After talking about her journey to create Carter’s House and the magnitude of her work, McConaughey posed one question.

“Is there anything that you would like to do that you’re not able to do right now to connect with your family more?,” he asked.

Carter responded by saying she wanted to take her family on a trip to Mexico, which resulted in McConaughey granting her request leaving her teary-eyed and with only three words to say, with a smile – “you’re too much.”

“Well, obviously my friends and I at Wild Turkey have heard about the wonderful work you’ve been doing in your community and how you’ve been working tirelessly over the past few months and even in the last seven years to help those around you,” he said. “And to show our thanks to you, we want to give you and your family that trip to Mexico once things are safe and clear.”

A glimpse into the future

Carter will tell anyone who asks that this past year has been one of learning, growth, and transition. But, she’s optimistic about the future of Carter’s House and its continued reach across parts of Dallas, a place she’s called home ever since she was four-years-old.

“The future looks like a couple of things,” she said. “It looks like a shift in the way we provide clothes. It looks like now our clothes are now not just for the children, but they are more toward the family as a whole.”

Carter insists that the services they provide not only change lives but also gives those who seek out their help a sense of community and support.

“Sometimes, people look at it like its just clothes,” she said. “But, those clothes mean a lot. Those pieces of clothing are sometimes the defining things especially for a child when they have to go into a school and are being picked on.”

Since the closure of the Martin Luther King Jr. Center in March, Carter says she has moved her office four times. But, she hopes to find a permanent facility sooner rather than later to serve more people than ever before.

“We would like to grow to where we are the go-to person for families in trouble,” she said. “Our services are designed to help those families who are like in between a paycheck. So, we want to make sure that those families are aware that they can come to us. You don’t have to be in a housing crisis, you don’t have to have like no money – we want you to show up. We are here to help you.”