EL PASO, Texas — President-elect Joe Biden has pledged to undo many of President Donald Trump’s immigration policies, including halting the building of the southern border wall.

Limon lives in Sunland Park, N.M., where two countries and three states meet in a mishmash of borders so close that those who live here regard it as one big community.

El Paso, Texas, is just over the state line, and many who live on the New Mexico side make the 15-minute commute for work in the neighboring state. Thousands of U.S. citizens living in Ciudad Juárez, the Mexican city over the border, make the trip to school or work on the U.S. side every day.

Immigration and border issues have always been at the forefront of life here in this desert mountain landscape often referred to as the Borderplex, America’s largest bilingual and binational workforce that includes about 2.5 million people between El Paso and Las Cruces, New Mexico, and Ciudad Juarez.

But the past four years have brought intolerable amounts of harassment from U.S. Border Patrol and other U.S. authorities, Limon said.

“They treat us all of us like delinquents,” she said.  “We are all hoping it will change now. We want to feel safe in our own community.”

Border patrol officers make nearly daily incursions into her neighborhood of small ranch-style houses and doublewide trailers tucked up against the rocky, mountainous border with Mexico on the other side of the cargo train tracks. It’s a family-oriented neighborhood of multigenerational Hispanics, most of whom work in the service industry in the Borderplex area. Some of whom are resident aliens or U.S. citizens; others are undocumented, Limon said.

The patrol's green and white marked trucks drive slowly through the streets, stopping seemingly randomly at houses to search for undocumented persons. Sometimes they arrive on horseback, she said. They enter private homes without permission and intimidate everyone, even those who are legally allowed to live in the U.S. like her, Limon said.

Donald Trump’s 2016 White House campaign promised to build a border wall that would stretch across the 1,954 miles from the Pacific Ocean in the west to the Gulf of Mexico in the east. Then-candidate Trump said Mexico would pay for the “big beautiful wall.”

Mexico didn’t pay for the wall, and Congress refused to foot the $5.7 billion bill Trump was demanding.

So, in February 2019, Trump declared a national emergency that allowed the White House to redirect Department of Defense money into the wall’s construction.

Four years later, 402 miles of the wall has been built, much of it in Texas, according to the U.S. Customs and Border Patrol.

That’s not exactly what Trump promised, and most of the wall construction celebrated by the Trump administration appears to be a reinforcement of barriers that already existed along the border before 2016.

But the president’s rhetoric about immigrants during the last four years has created more damage than any physical wall, said Fernando García, the executive director of the Border Network Human Rights, a nonprofit organization in El Paso. The organization was formed 20 years ago as a community-based organization working on human rights and immigration issues along the border in western Texas.

“What’s happening now in the U.S. has to do a lot with ideology and with fears about immigrants, and the purest expression of that fear was the Trump administration,” Garcia said. “With the Trump administration, we saw everything playing out. Before him, we never saw a president embracing white supremacy, calling Mexican's criminals, rapists, or animals.”

Trump has used the “highest office in the nation to demonize” immigrants coming from the south, he said.

Limon, 50, blames Trump and his supporters’ rhetoric for the fear in which she and her neighbors now live. Although not a U.S. citizen, Limon, is a legal resident of the U.S. and has lived in the El Paso-Sunland Park area for at least 15 years. Two years ago, she joined the Border Network for Human Rights as a volunteer to help raise local awareness about how residents can protect themselves from border patrol harassments and searches.

Many of the houses on her street and the neighboring streets have a sign posted beside the front door to reinforce the Fourth Amendment of the U.S. Constitution, which protects people from unreasonable searches and seizures by the government.

“Any law enforcement agency (local, state or federal), police, sheriff, I.C.C., Border Patrol or any other agency can’t come into your home without a search warrant or without your consent,” the sign says. 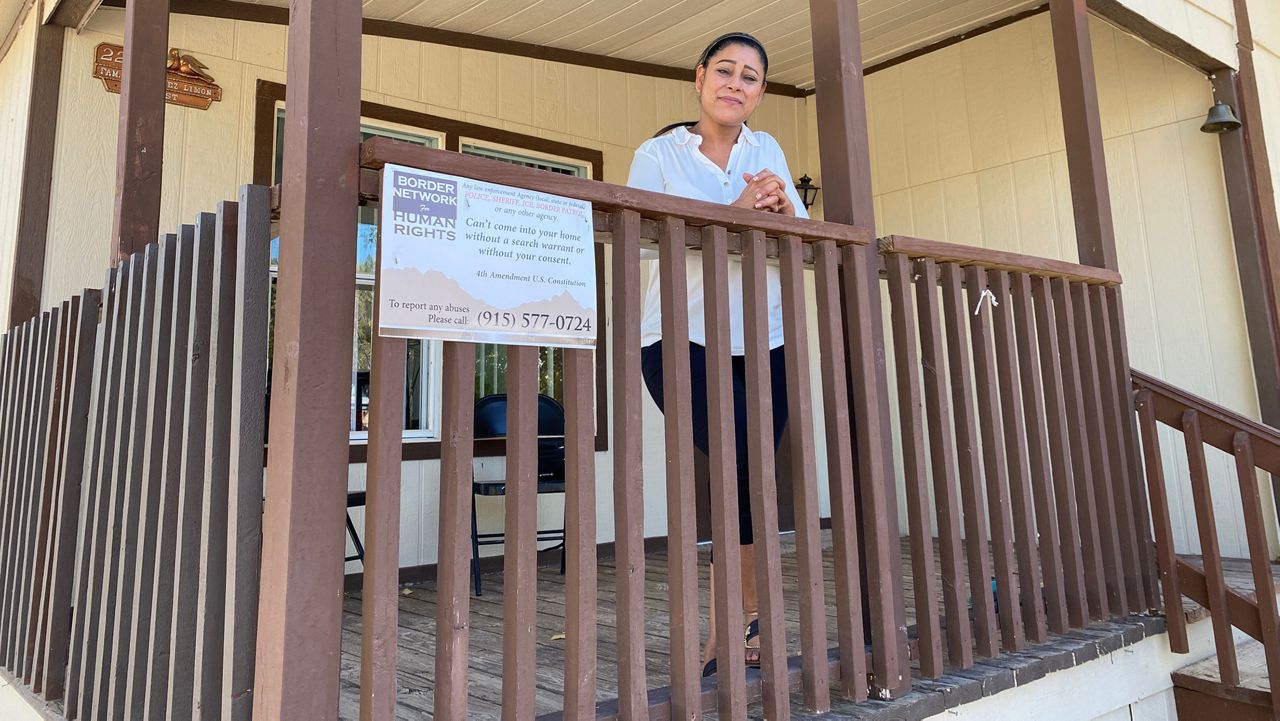 Lourdes Limon stands on the front porch of her Sunland Park, N.M., home. In the last four years, the U.S. Customs and Border Patrol has increased its visits and home searches in her neighborhood of mostly Hispanic families living right on the border between Texas, New Mexico, and the city of Juarez, Mexico. (Photo by Sabra Ayres/ Spectrum News)

Limon has helped distribute the signs around the neighborhood and given training on what the fourth amendment protects.

The signs haven’t stopped border patrol and other agency officers from coming into the neighborhood, but it has created a sense of strength and confidence among those families living here, she said.

“We have rights and we need to know that,” she said.

Biden promised during his campaign in an interview with NPR that “'not another foot of wall would be constructed" along the border.

In our #nabjnahj2020 interview, @JoeBiden promised that 'not another foot of wall would be constructed" on the border. Watch our exchange: pic.twitter.com/rM9OgsYicU

To halt construction, a new president could cancel the national emergency order that allowed for the signing of border wall construction contracts. Then he could simply cancel the contracts.

With just less than two months until Joe Biden is sworn in, the White House is continuing its push to get the border wall built.

The Trump White House seems to be increasing its pace to get more miles of the wall built, said Roberto Lopez of the Texas Civil Right Project, a nonprofit working to assist landowners along the border trying to fight the government in court to stop it from taking their property to build a border wall.

Much of the proposed border wall in Texas would need to be built on what is currently privately-owned land. The government must first sue the landowners to get permission to survey the land and then sue to buy the land under eminent domain laws.

From 2017 to 2019, the government averaged about two to three such legal cases a month against Texas landowners. Now, “the government is taking landowners to court at a rate that is triple what we saw at back in 2018 and 2019,” he said.

“There are large swaths of land where the wall is already coming up, and I think [the White House] is trying to get as much of it done before late January,” Lopez said. The government’s legal filings against landowners have continued even after the Nov. 3 election, he said.

It’s not just the construction of more government-funded border walls that has many residents in Texas concerned.

Last year, a Sunland Park-based brick company allowed a privately-funded wall to be built from the banks of the Rio Grande straight up the rocky, desert mountain ridge, blocking a section of the dusty, rocky river bank frequented by families in the area for picnics and swimming.

The project was called We Build the Wall and raised some $25 million via a viral GoFundMe campaign.

That wall is now part of a federal investigation in which prosecutors accused a former Trump adviser, Steve Bannon, of defrauding donors out of hundreds of thousands of dollars raised to build the wall. 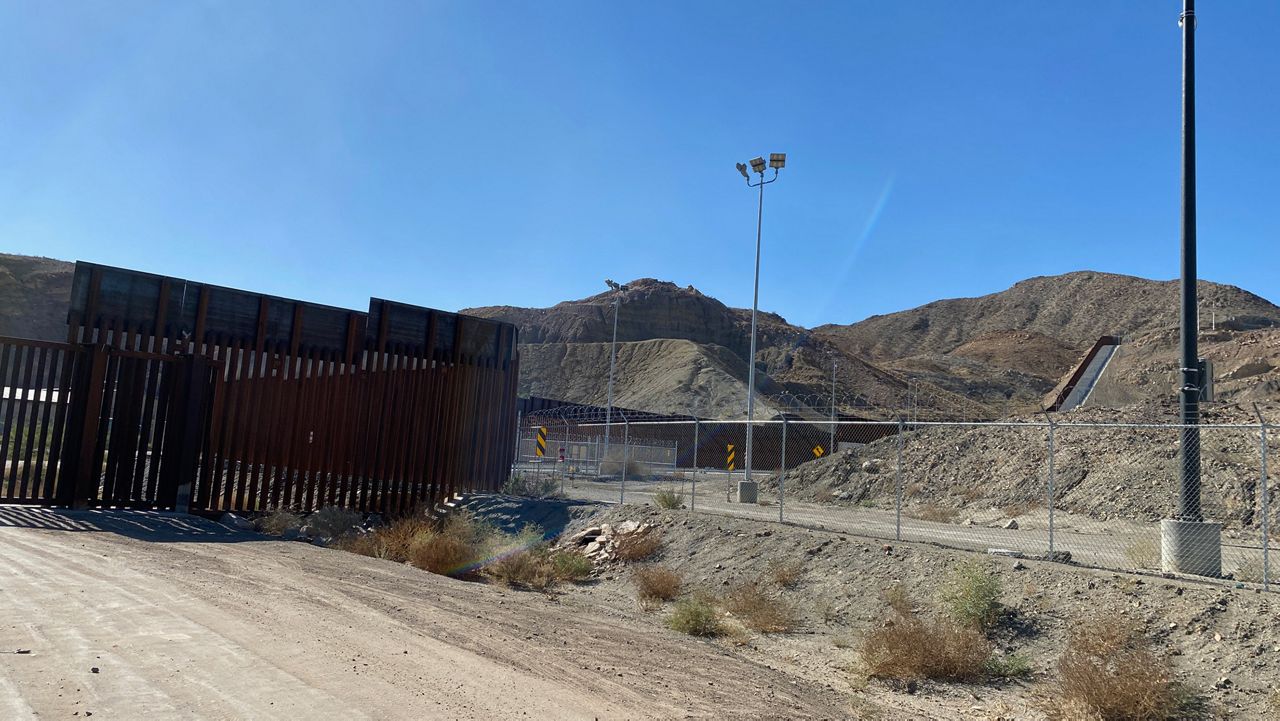 A half-mile section of the privately funded wall in Sunland Park, N.M., built last spring using crowdsourced funds from the We Build the Wall, Inc.. Federal prosecutors have indicted four members of the We Build the Wall, including Steve Bannon, a former advisor to President Donald Trump, accusing them of using funds from the non profit group for personal enrichment. (Photo by Sabra Ayres/ Spectrum News)

Fear and Hatred in the Borderplex

To Limon and other residents of El Paso and Sunland Park, it’s a visual reminder of how the Trump administration’s anti-immigrant language proliferated fear and hatred in the U.S.

Garcia said that it wasn't just Trump’s narrative and the demonization of immigrants that has affected the country. In August 2019, a gunman entered a Walmart in central El Paso and shot and killed 23 people and injured 26. The suspect in the shooting, a 21-year-old from the Dallas area, posted a manifesto online about “the Hispanic invasion of Texas” before the shooting.

Federal prosecutors are investigating the shooting as a domestic terrorist case.

Trump said after the El Paso shooting that “hate has no place in our country, and we’re going to take care of it,” but put most of the blame on mental illness.

The president’s critics say his denunciation has not been loud enough. Weeks earlier, he was criticized for telling a right-wing, white nationalist group called the Proud Boys to “stand down and stand by” during a debate with Biden.

But the attack on Walmart made him think that words could actually kill, he said.

“Trump was responsible for that, and I say that with no hesitation,” Garcia said.