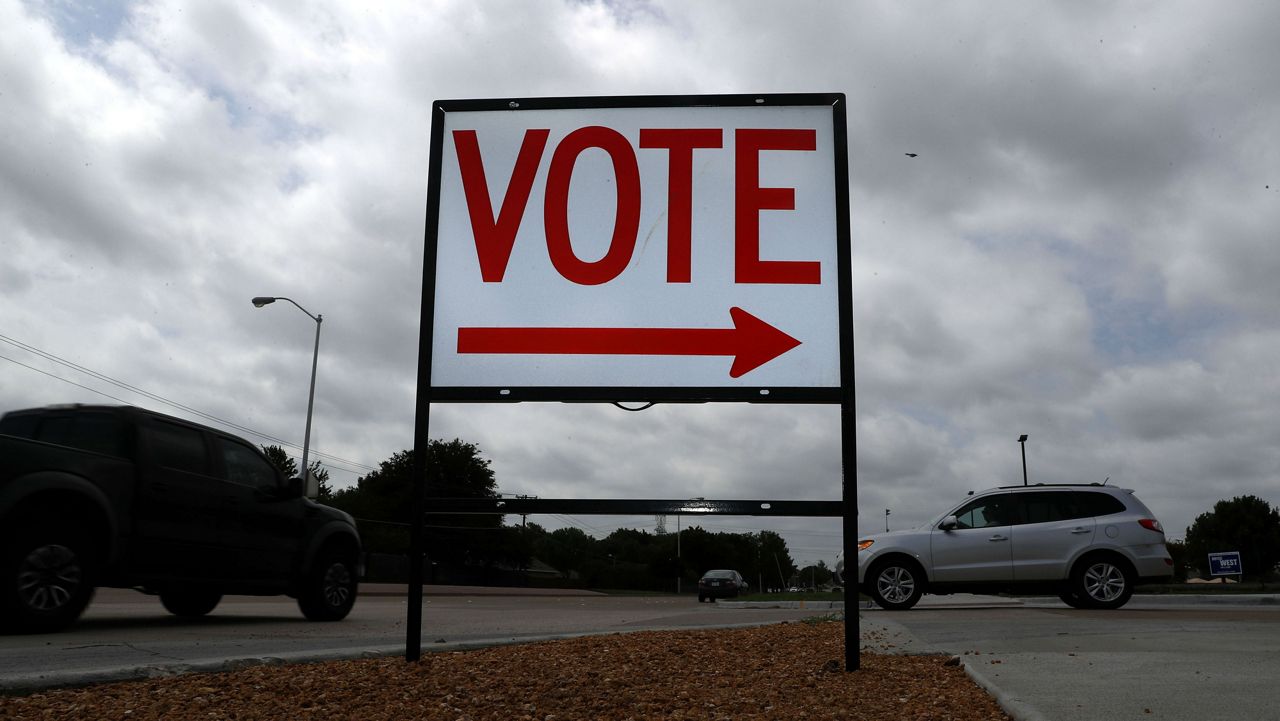 A sign points where to vote at a polling station in Plano, Texas (AP Photo/LM Otero)

Texas Breaks Voting Records, But When Will We See Results?

TEXAS — The polls may close at 7 p.m. on Election Day, but election officials are warning it could take hours, even days, to count the votes. A record 9 million Texans have already cast their ballots, surpassing the total November 2016 turnout with one day left in early voting.

With that staggering turnout, elections administrators, especially in urban counties, say it is not easy to predict exactly when they will release results, and close races could take a week to resolve. State law in Texas also allows for some votes to come in after Election Day.

Even amid the coronavirus pandemic, Texans feel driven to vote in record numbers. Many more Texans this year are exercising their right through mail-in voting over voting in person.

“I didn't want to, I was afraid actually to come through the long line in,” said 84-year-old Ofelia Perez who handed in her mail-in ballot in Travis County.

Another voter, 65-year-old Anna Maria Pluymen is blind. She handed delivered her absentee ballot the week before Election Day.

“It's very important. We all we all want what's right for, for the economy and for the people,” Pluymen said.

But the large number of mail-in ballots this time around is causing some uncertainty about when we could see results — particularly in close races. That is because counting does not end on Election Day.

Mail-in ballots postmarked by Election Day will be counted if they get to county offices before 5 p.m. the next day. Ballots mailed by military and overseas voters can come in as late as the following Monday.

Provisional voting also allows voters whose name does not appear on a list of registered voters or who do not have acceptable forms of photo identification. The provisional voting process requires voters to visit the voter registrar’s office within six days of Election Day to present an acceptable form of photo identification or submit a temporary affidavit.

Officials with the Texas Secretary of State’s Office said in the November 2016 election, approved provisional ballots and late mail ballots added 74,000 votes to the unofficial results on Election Day.

“I make no predictions about the turnout or mail ballots after Election Day for this year, it is something that I'm going to be watching very carefully, because it's a number that I'm interested in,” Keith Ingram, director of the elections division at the Texas Secretary of State’s Office, said.

Elections administrators will begin the hours-long process of counting a record number of early votes the morning of Election Day. Mail ballots can be processed now in large counties with a population of over 100,000 people.

Ingram, director of the elections division at the Texas Secretary of State’s Office said it might be a later night than normal because this year it is a state and county officer election, so it is a large ballot. There was also a number of local elections that were scheduled to be held in May, that were postponed in November because of the pandemic, he said.

“The law in Texas says that counties have to count continuously until they're through counting all of the votes that have been cast by Election Day. So anything that's cast by 7 p.m. on Election Day will be counted that night,” Ingram said.

But Texas also allows voters to cast a ballot if they are in line by 7 p.m. when polls close, which has historically added hours of delay.

After decades of offered straight-ticket voting, Texas also no longer has the one-step option in the 2020 General Election. Without being able to select all candidates for a single party in one go, some elections administrators worry it could mean more voters are spending time at the polls, thereby leading to more lines. In 2018, two-thirds of Texans voted straight-ticket.

Travis County Clerk Dana DeBeauvoir told Spectrum News they try to have elections finished by the 10 p.m. news broadcast, but it will not be the case this Tuesday.

“The best thing voters can do is not put themselves in the position where they run out of options to be able to vote. If you wait till Election Day, you have really cut your options off, and if you'd wait too late in the day, then you're really stuck, because what if something happens,” she said.

It is those what-if scenarios voters like Pluymen wanted to avoid.

“The important thing is that the votes get in and that everybody is counted,” she said.

It is a count that could take days — if Texans do not make a plan to cast a ballot early — even early on Election Day.