DALLAS  – “Mayday, mayday, mayday!” instructor Bobby Johnson called out as David Alvarado and his fellow high school seniors pulled hoods down over their face shields, completely blinding them to the world around them.

The four students were then told that a fellow firefighter was in trouble somewhere inside the Lewisville High School football stadium and they would have to follow that fighter’s hose line into potentially dangerous conditions.

Of course, it was a drill, but as the students begin a blind crawl into the stadium, their instructors want the drill to feel as real and as intense as possible.

They are part of the Lewisville School District’s Firefighting Academy. The academy is a two-year program for high school juniors and seniors to earn dual credit while preparing to earn their state firefighting and EMT certification. It’s a joint effort between the district, local fire departments, and nearby North Central Texas College.

For Alvarado, joining the program was a no-brainer as it gives him the opportunity to start following in his father’s footsteps as a lifesaver.

“I grew up around the fire service, so as I grew older the passion just grew and every time I was around fire trucks and fire engines I just got goosebumps,” said David.

Inside the high school, the program’s first-year students work bunker drills--essentially a race to put on their complex set of firefighting gear as quickly as possible. Students like Levi Johnson break a sweat as they get geared up in well under two minutes. 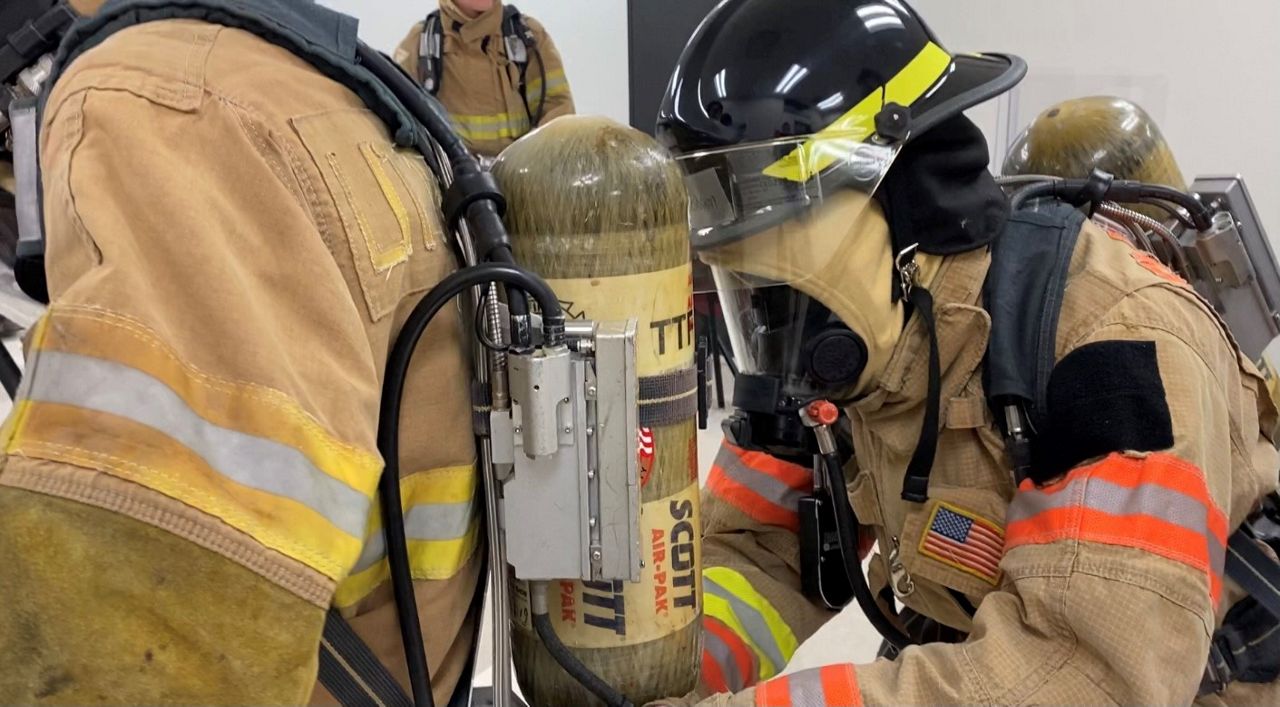 “I’ve always wanted to be a firefighter, like ever since I was little. I really like helping people,” said Johnson.

All of the drills and training in the program are the same stuff professional firefighters go through. Again, the goal for these students is to walk straight from graduation into eligibility to work as professional firefighters, should they choose to. Basically, as one instructor in the program put it: “It’s an opportunity for the students to see if they have a passion for firefighting at a young age.”

Their instructors certainly hope some will discover that the answer is yes, they do.

“The number of applicants into the fire service has actually been going down for a while,” said Johnson, a lieutenant in the Irving Fire Department.

Fire departments in Texas and across the country have been fighting a personnel shortage for some time. Experts say the issues are most prevalent in volunteer departments, but it’s also lead to more competition between bigger departments looking to attract good firefighters and EMTs.

Budgets, funding, and the long, intense hours of the profession all seem to be factors for the shrinking candidate pool, but firefighters say there’s also just been a declining interest in firefighting among young people.

High school academies like Lewisville’s, they hope, could be an answer to that problem.

Johnson and his fellow instructors try to inspire the “brotherhood” of the profession in the students and show them why firefighting can be such a rewarding career path. For many of them, he says, it’s about reigniting the spark that they may have had once upon a time.

“A lot of people are like, ‘Man, when I was a little kid I saw the fire engines and always wanted to be a fireman, I just never knew anybody who did it,’ so this is introducing people on how to do it,” said Johnson.

The program graduated its first class last year, and so far, the district says several of the students went on to pursue firefighting as a career path and, of course, some found it wasn’t for them after all. Johnson’s even seen students drop from his course, but those who stuck around appear to be in it for the haul.

Alvarado and his three classmates, still blinded by their hoods, pulled a large mannequin from the bathroom of the LHS stadium and to “safety” to pass yet another grueling drill. As the students pull off their hoods and firefighting masks, they are drenched in sweat and out of breath from the task, but none of them complain--they remain laser-focused as they debrief on what went well and what needed work.

The program to create the next generation of firefighters has clearly found at least one here.

“This is definitely the path I’ve decided to take after high school,” said Alvarado as he and his classmates prepared for the next task on their path to saving lives.