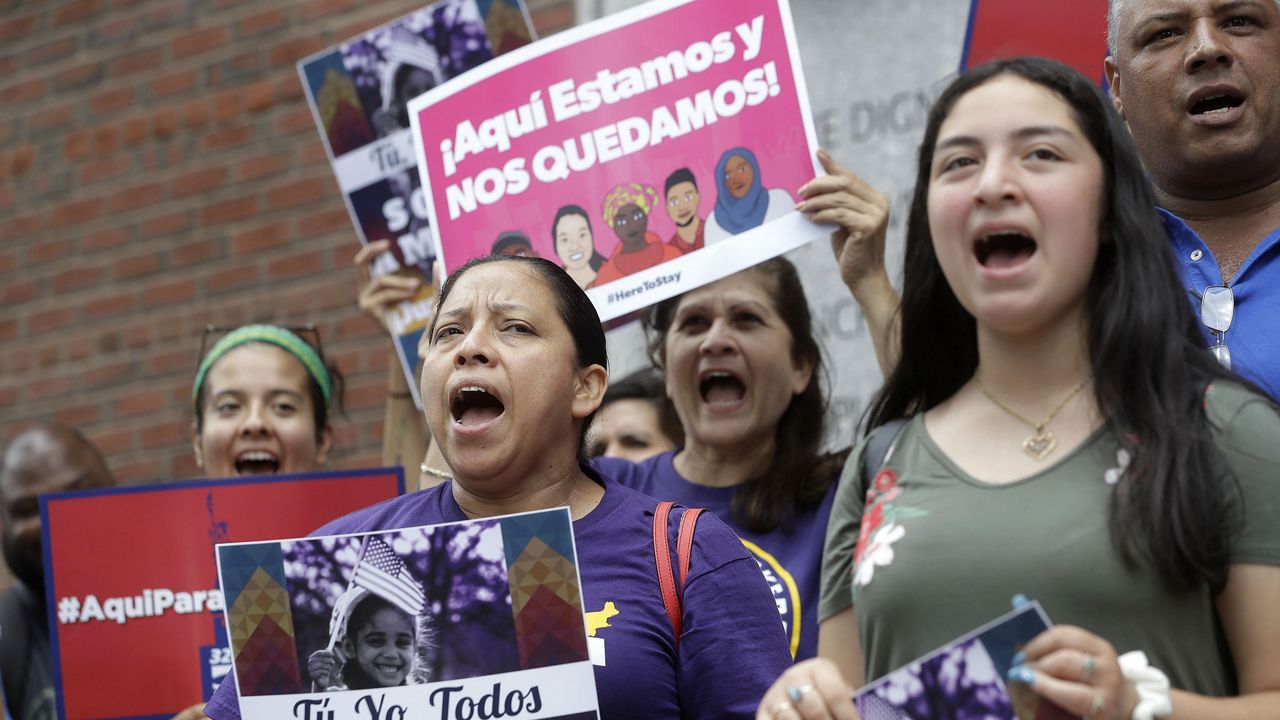 FILE - Protesters display placards and chant slogans, Wednesday, Aug. 14, 2019, while gathered outside federal court, in Boston. The demonstration was held to protest the Trump administration's campaign to end temporary protected status, or TPS, for tens of thousands of immigrants nationwide. (AP Photo/Steven Senne)

“I made my life here”: Thousands of Immigrants in Texas Could Face Deportation

DALLAS, Texas — Thousands of immigrants living and working in Texas legally could be forced to find another way to remain in the United States or depart the country following a court ruling this week. Trump administration officials want to end the Temporary Protected Status (TPS) program for several countries, saying the protections that justified staying in the U.S. no longer exist. The ruling is devastating news for many families who have built lives in Texas.

“There’s just a lot of fear out there right now and also a lot of confusion,” Bobby Painter, managing attorney for American Gateways, which provides legal assistance to immigrants in 23 Central Texas counties, said in an interview with Spectrum News’s Capital Tonight.

A recent federal appeals court ruling clears the way for the Trump administration to phase out the TPS program and begin deportations of immigrants from El Salvador, Haiti, Nicaragua and Sudan. The ruling is also expected to affect the status of recipients from Honduras and Nepal. An appeal is imminent, and orders to leave would not take effect for months, but it could affect more than 300,000 immigrants nationwide.

“I don’t think anyone would argue that many of the countries designated under the program are now safe places to return to,” Painter said.

Thirty-three-year-old Gloria Soto fled violence in Honduras and immigrated to Texas when she was was 8 years old. She has since been living and working in the Dallas area under the temporary protected status program. Soto said she just bought a home.

“I purchased my property, I report taxes, I'm working for a finance (company). I’m doing everything thing that a U.S. citizen is doing, working hard for this country,” Soto said.

Soto is also a single mother to 14-year-old and 11-year-old daughters, who were born in the United States. She said she is disappointed about the court ruling, particularly because of what it could mean for the future of her girls.

“My oldest daughter, she has special needs. Right? She needs to be checked up here. She needs to be going through appointments. In my country, that couldn't happen because of the situation of there,” Soto said.

As the legal process is drawn out, activists and TPS recipients are calling on Congress to come up with a permanent solution.

“We need comprehensive immigration reform and it needs to take into account the hundreds of thousands of beneficiaries who have built their lives here,” Painter said.

As fears about family separation grow, Soto said there is no way she could leave her children in the United States — the country she knows as home.