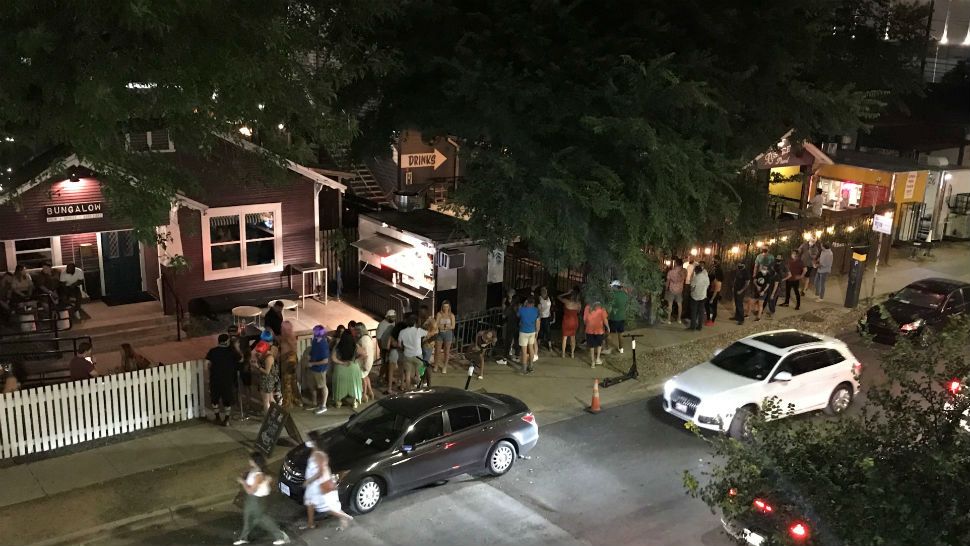 AUSTIN, Texas — Back in late June, nearly 6,600 bars were forced to temporarily close across Texas as Gov. Greg Abbott announced a scale back of the state’s reopening. Since then more than 800 bars, and hundreds more in the pipeline, have been able to get around that rule, by reclassifying themselves as restaurants.

Paparazzi Pizza is what put The Blind Pig on “Dirty” Sixth Street in Austin. The two are right next to each other, and Bob Woody owns both, allowing him to modify the floor plan of his bar to include a commercial kitchen and reclassify as a restaurant.

Woody is chairman of the Texas Bar and Nightclub Association and owner of roughly a dozen bars and restaurants in Austin. He said bars received the short-end of the stick when Abbott decided to close down bars at the end of June. Bars were only allowed to reopen roughly a month before.

“We were told on Friday at 9 a.m., ‘At 12 noon today you’re closed,’” Woody recalled. “The restaurants again received a privileged treatment, which I own restaurants, and it was said you’re allowed to go to 50 percent capacity on Monday.”

The bar and restaurant mogul says the apparent lack of urgency for restaurants to scale back their capacities wasn’t the only slap in the face to the bar industry. Woody claims many of those restaurants, who were still permitted to sell alcohol, were doing more booze sales than food sales.

“Certain restaurants had an incredible infusion of business, not based on food, but looking for a bar to go to,” he said.

Since bars shut down again in late June, TABC says 75 bars have had their liquor license suspended for operating with 51 percent alcohol sales while the governor’s executive order says they’re to be doing otherwise. But more than 1,100 bar owners like Woody have instead applied for a food and beverage certificate to reclassify as a restaurant.

Previously in order to qualify for a food and beverage certificate, in addition to bars having to project at least 51 percent of their sales to be food sales instead of alcohol in order to qualify, they would also need to have a commercial kitchen on site. However on August 25, TABC announced they were relaxing the rules to allow food sales to come from food truck sales or the sale of food prepared in an off-site commercial kitchen, to count toward 51 percent food sales as long as the sales were funneled through the bar/restaurant.

The lost tax revenue was certainly part of Woody’s pitch to TABC to bend the rules around food and beverage certificates. Pre-COVID, Woody says that figure was approaching $700 million a year.

Back when bars were allowed to be open from late May to late June, according to TABC there were 17 drinking establishments across Texas that had their liquor licenses suspended following undercover TABC inspections that found issues with social distancing.

One of Woody’s bars, Buford’s Backyard Beer Garden, was the recipient of one of those 30-day license suspensions. He disputes their findings and story, and argues he never was allowed to appeal his suspension before all bars were forced to shutter. Woody says TABC should help better explain the rules.

“If you want me to practice social distancing, all you’ve got to do is teach me a class on it and I’ve got it,” exclaimed Woody.

“But if you tell me practice social distancing - and you go back in time to where nobody has ever heard of that word - what am I supposed to do? And why should I be punished for it if I haven’t had a class for it and it’s never been asked of me before?”

Despite having helped TABC craft the guidelines for bars to reopen back in May, Woody said the state agency made his guidelines stricter. He says he’s asked TABC for a class on what bars need to do to meet social distancing requirements, but says that’s never happened.

A spokesperson for TABC said he wasn’t aware of any plans to conduct either in-person or virtual classes on social distancing guidelines for bars turned restaurants. However the spokesperson said TABC has made printed material available on its website and to industry members upon request. They add that the agency “will continue to conduct regular inspections and audits of businesses to ensure they are complying with the Alcoholic Beverage Code and the Governor’s executive orders.”

According to TABC, since June 26, they’ve conducted more than 10,000 inspections, and the agency expects “to continue operations at a similar pace for as long as necessary.