Tenth Street Residential Association members Shaun Montgomery, left, and Patricia Cox, right, worry that their neighborhood's historic significance will disappear with every house that's demolished. The association received a grant from the National Trust for Historic Preservation to help it protect its landmarks. (Photo by Sabra Ayres/Spectrum News)

DALLAS — In the late 1880s, when freed slaves began settling in the northeast corner of what was then the city of Oak Cliff, it was unlikely that they did so because they saw potential in the slightly rolling landscape west of the Trinity River.

“It was one of the only places Blacks were allowed to live,” said Shaun Montgomery, a member of the Tenth Street Residential Association, whose family has lived in the district for four generations.

“They were free, but they still didn’t have any rights,” she said.

Today, the Tenth Street Historic District community worries about the threat of gentrification and the city’s bulldozers, which have demolished about 70 out of more than 260 historic buildings in the area. With every fallen building, Montgomery and her neighbors worry a bit of the district’s history of grit and perseverance under oppression is lost for the generations to come.

“We want the city to remember that there are people who live here and want to keep living here,” Montgomery said.

Last year, the National Trust for Historic Preservation put the Tenth Street Historic District at the top of its list of America's 11 Most Endangered Historic Places, citing the city’s demolition of historic homes as the predominant threat.


The community that the former slaves and their families built next to the mostly white Oak Cliff flourished quickly. Businesses and services denied to Blacks in other parts of Dallas, such as doctors, schools, and restaurants, opened up and created a bustling commercial center.

Tenth Street Addition, as it was known, became an example of how a population that came from nothing could build a self-sustaining, thriving community, Montgomery said. Members of the community have been at the forefront of every major civil rights movement in Dallas, many of them becoming leaders in the city’s branch of the National Association for the Advancement of Colored People, or NAACP.

In July, the National Trust for Historic Preservation granted the organization $75,000 to help it continue its advocacy and preservation work. The money will allow the district’s association to rent an office space and hire a full-time director tasked with working with the city government on historic preservation as well as improving services for current residents of the district.

Tenth Street was one of 27 sites in the U.S. to receive the grant as part of the African American Cultural Heritage Action Fund. The fund has invested more than $5 million in 65 sites in the last two and a half years.

Grants through the Action Fund support the preservation of places with histories and stories that “represent the resilience, activism, and achievement,” of African Americans’ contribution to the nation’s history, said Brent Leggs, the executive director for the African American Cultural Heritage Action Fund.

“The lesson and stories in these landscapes and buildings are roadmaps for future generations,” he said.

In the past, historical markers and memorials focused on the major Black leaders, such as Dr. Martin Luther King or John Lewis, said Dr. Lopes Matthews, a digital archivist and historian at Howard University, a historically black university in Washington, D.C. Matthews also sits on the Maryland Commission of African American History and Culture.

But over the past two decades, more city, state, and national registries have given recognition to places like the Tenth Street District, whose communities helped make what King and Lewis achieved in civil rights possible, he said.

“Instead of this sort of hero-worship, we’re seeing more recognition of the work of everyday people’s contribution to African American history,” Matthews said.

Empty Lots And For Sale Signs

The Tenth Street Historic District is one of the only remaining inhabited former Freedmen’s Towns in America.

Many of the residents can trace their roots back to the original Black settlers to the area. Most of the small, one-story wooden cottages and narrow “shotgun” houses date back at least 100 years, said Patricia Cox, a member of the residents association and a long-time activist.

“Underneath this siding is the original wood,” Cox said as she tapped her fingers on the aluminum siding next to her front door. “All the windows of this house are original, except for this front one. That was replaced in the 1950s. All of these houses are like this.”

But many of the estimated 250 structures and houses are in need of immediate repairs, an expense that many residents of this low-income working-class neighborhood can’t afford. 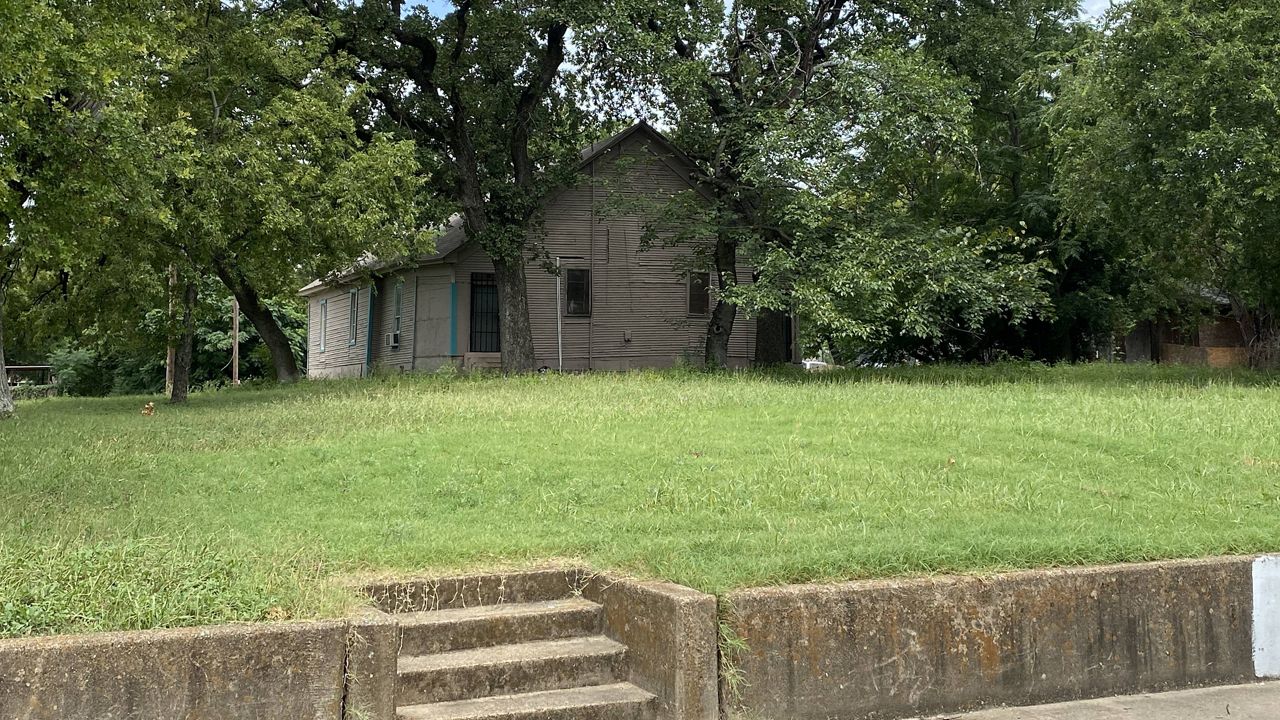 Empty lots like this one on Anthony Street worry members of the Tenth Street Residential Association like Patricia Cox, who says developers are watching them "like vultures." The structure behind the lot is an original building dating back to the 1920s and typical of the district's historic architecture. (Photo by Sabra Ayres/Spectrum News)

When buildings fall into disrepair, the city can condemn it and tear it down, creating a worrying number of empty lots in the district.

The Tenth Street District was named Dallas’ 12th historical district in 1993, and listed on the National Register of Historic Places in 1994. Those designations are largely based on the district’s “cultural significance and architectural value.”

Every house or building that is demolished jeopardizes the district’s status, Montgomery said.

The residential organization will use part of the grant funding to continue a campaign seeking to change a city ordinance that allows the city to demolish abandoned buildings under 3,000 square feet.

“For sale” signs are popping up in a growing number empty, grassy lots, where there were once families spilling out of their houses on to their porches in a bustling, safe neighborhood.

The predominantly African American district’s economy was wrecked in 1955, when the state built Interstate 35 E through the neighborhood, taking out nearly 175 original homes and structures in its construction’s wake. Many families moved on as economic downturn closed up businesses.

“We were redlined,” said Patricia Cox, referring to a discriminatory practice in which governments segregate communities by cutting them off from certain government services.

Developers today are eyeing the empty lots “like vultures,” said Cox, who was born in the district and still lives in the same house where her parents moved when she was three months old.

Gentrification in Oak Cliff, which the city of Dallas annexed in 1903, is creeping towards the district, making Cox and others worried. In recent years, another problem has emerged: drug addiction fueled by poverty and economic inequalities.

“They thought if they couldn’t get rid of use by running a freeway through here and taking away our services, then they could just let the drug dealers in,” Cox said.

Preserving their neighborhood isn’t the first fight for the residents of the Tenth Street District, and it won’t be its last.

The slogan for the Tenth Street Residential Association written across her t-shirt summed up Montgomery’s point: Fearless Fighters.