A sign outside Winnetka Elementary School in Oak Cliff, Dallas, flashes "Have a safe summer!!" Area teachers are worried about the region's COVID-19 rates, which are the highest in Dallas. (Photo by Sabra Ayres/Spectrum News)

TEXAS – In the weeks and days before the Dallas Independent School District made its decision about restarting the school year as COVID case surged in Texas, public comments in virtual town halls and school board meetings trended toward caution about an in-classroom start.

But in call after call, another trend emerged.

Oak Cliff teachers’ calls consistently stood out in both their collective participation as well as their impassioned comments. Their schools are located in some of Dallas’ hardest-hit zip codes, including 75211, where COVID rates have been two and three times higher than most of Dallas County’s other zips codes.

“I don’t want to attend any funerals for my students or my colleagues,” Ashely Fiamingo, a science teacher at Franklin D. Roosevelt High School, told the school board during its July 23 meeting.


In that meeting, the board of trustees voted to delay the start of the school year to September 8, but it did not specify if the district would be virtual or in the classrooms. Nationally, the White House and Education Secretary Betsy Devos are urging states to get kids back in the classrooms. In Texas, Gov. Greg Abbott extended the time period school districts can opt to offer online-only classes.

The Dallas ISD board will decide on Aug. 27 if and for how long the new school year could go virtual.

Most teachers and parents in Dallas ISD schools are preparing for classes to be virtual, at least at the beginning. But for Oak Cliff teachers and students, the school district’s last-minute decision making has been disconcerting.

As COVID-19 cases have increased in Dallas County, the South Oak Cliff area in the 75211 zip code has come to represent what medical professionals see as a convergence of multiple contributing factors to the spread of the virus.

South Oak Cliff is about 84 percent Hispanic and mostly low income in a county where its Latino COVID-19 infection rates are significantly higher than for white. Dallas County itself is about 41 percent Hispanic, yet 60 percent of COVID cases in the county are Latino.

Students from this area tend to live in multigenerational homes, where many of the adults are essential workers in construction and health care, industries that have seen high infection rates as well. Crowded living conditions have made isolating COVID-19 patients at home difficult, and infection rate trends show the disease spreading quickly among family and household members.

Many of low-income residents of Oak Cliff are uninsured or afraid to seek medical attention because they can’t afford it or they are worried about revealing their immigration status.

For teachers like Rosie Curts, the risks of returning to the classroom are too great to not speak out.

“Many of us feel that we have to advocate for our students because so many of them have parents who can’t do it for them,” she said.

It’s not that these parents don’t care about their kids, it’s that they often don’t have the language skills or the institutional knowledge of how the public school system works to voice their opinions, she said. 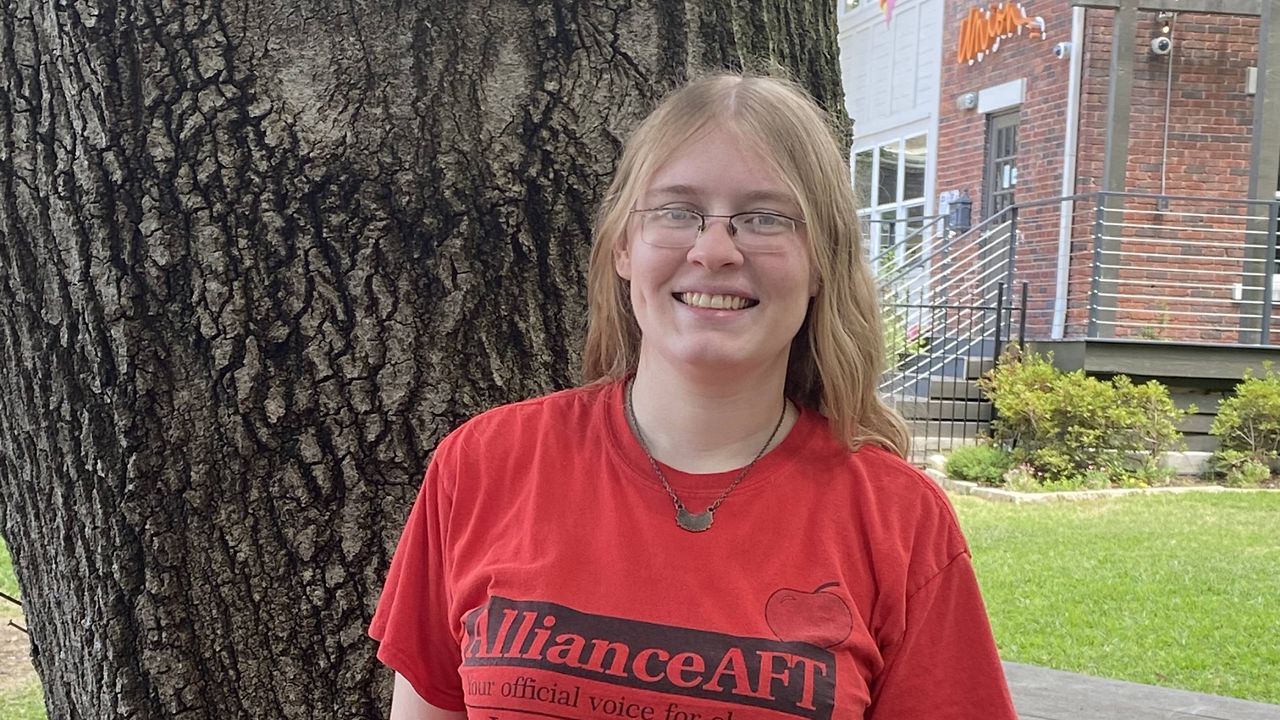 Rosie Curts, a teacher at W.H. Adamson High School in Oak Cliff, Dallas, says the school district should be focused more on preparing teachers for virtual learning curriculum instead of wasting time debating when to open classrooms. (Photo by Sabra Ayres/Spectrum News)

Curts was one of the dozens who spoke during two hours of public comment at a July 23 Dallas ISD board of trustees meeting. The meeting was held online.

She called in because she felt that teachers were not being consulted during the most difficult decision the school board has ever had to make.

In June, before Dallas began seeing a large spike in COVID cases, teachers received a survey asking if they were “able to return to school,” Curts said. The wording confused Curts because while physically she was able to return to the classroom, she didn’t feel safe about it.

“They weren’t asking us the right question,” she said. “Had they asked, I would have told them they are wasting their time worrying about if we should go back to the classroom and instead used that time to help us better prepare for another semester of virtual learning.”

Curts said was struck by the number Oak Cliff voices speaking out at the school board meetings, where she has lived and taught algebra at W.H. Adamson High School for four years. But she said she was not altogether surprised.

Oak Cliff, which is south of downtown Dallas and west of the Trinity River, has a reputation for having a strong, unique identity. The area was its own city until 1901, when it became part of the City of Dallas.

The southwest section of Dallas has a rich history that dates back to the late 19th century, when two developers subdivided a large farm to create a new city grid. In the 1880s, freed slaves settled in the area around 10th Street, parts of which now are registered as endangered with the National Trust for Historic Preservation.

And then there was a rap song by Young Nino, “Oak Cliff That’s My Hood,” that became a club hit across the Dallas-Fort Worth area in the late 1990s, giving Oak Cliff residents another reason to show their local pride.

Christian Puga, who also teaches algebra at W.H.Adamson High School, grew up in Oak Cliff and went to Dallas ISD schools. After completing her degree at the University of Texas at Austin, she returned to the area to become a teacher.

“My roots are here, and I identify a lot with the students,” she said. “When I’m teaching, I see my family.”

This summer she taught students from 75211 and the surrounding area as part of the Upward Bound, a federally funded program serving students from low-income families to help them prepare for post-secondary academics. The classes were held online, but Puga said it was obvious the students were feeling the impact of COVID, both emotionally and economically.

When her students would not connect online for several days, Puga would reach out. They would tell her they had to go find a job because one of their parents had lost theirs or become sick.

Returning to the classroom would mean “a whole lot of worlds intersecting,” Puga said. Many students’ parents work on construction sites, or clean houses, or work in grocery stores, potentially exposing them to a variety of risks, she said. “And then their children would be coming into school with us? People are scared.”

Maritza Lopez, a kindergarten teacher at Winnetka Elementary, is worried about her aging school’s ventilation system. She teachers in a modular building outside the main facility. The windows don’t open, she said.

Last year, the flu spread through the kindergarten classes. Out of six kindergarten teachers, only one didn’t get sick, she said.

Given that experience, Lopez fears COVID-19 could impact the staff and students even harder.

“There's no way everything's going to go smoothly with how our zip code is right now,” Lopez said.

Lopez said she understands that virtual learning is not giving kids all they need academically and socially.

"But at least they would be alive," if the school remains virtual until the COVID-19 infection rates are stabilized, she said.

Not far from Winnetka Elementary, West Jefferson Boulevard cuts through a large part of the neighborhood and is lined with stores catering to the local Latino population. Storefront windows display a variety of colorful Quinceañera dresses worn during celebrations for a 15-year-old girl’s coming-of-age.

Despite the uncertainty of the coming school year, many of the boulevard's stores have stocked up on back-to-school supplies.