LBJ Standout Humbled by Injury, Motivated to Come Back

AUSTIN, Texas — As LBJ got ready to take the field in their season opener last August, junior Latrell McCutchin was one of the guys leading the team onto the field.

He had planned a specific entrance, where he would rip up a shirt from the opposing team and slam it into a trash can that had been brought out onto the field. McCutchin did just that. He tore up a shirt, ran onto the field and jumped up to slam it in the trash can but it all went terribly wrong when he landed.

“As I landed, my right knee just snaps inside but the rest of my leg is still straight,” McCutchin described the moment. “I didn’t hear a pop and I jogged all the way down the field. I was still trying to play on it.”

But after being looked at by the trainer, McCutchin was told not to play that night and that he needed to go see a doctor. A week later he went in for an MRI and when the results came back, his fears were brought to reality.

“The doctor came in the room and told me I tore my ACL and my lateral meniscus,” says McCutchin. “It was devastating. I shed some tears in the doctor’s office that day.”

That was it for McCutchin’s season; he would not play one snap. He watched from the sidelines as LBJ went 8-3 and lost in the first round of the playoffs. 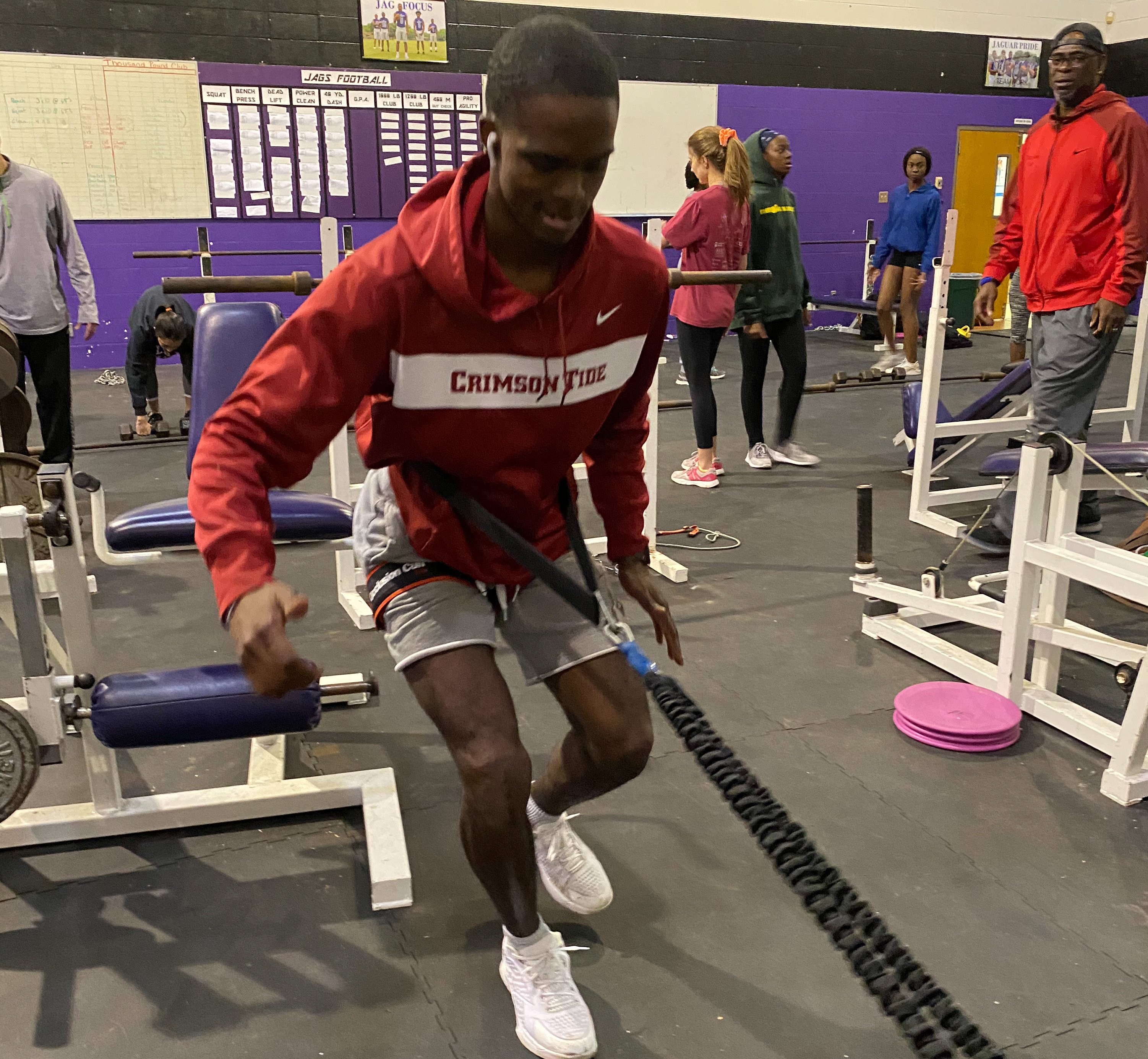 “It’s pretty frustrating knowing you’re not going to be out there,” says McCutchin. “Being on the sidelines wasn’t too hard because I support my guys. Those are my guys.”

As the months went on, the rehab process was taking place. McCutchin had a lot of long days in front of him to regain strength in that right knee and get back to being the player who was already emerging as one of the top recruits in the state.

“I’m not going to lie, it’s been tough,” says McCutchin of the rehab process. “I had some dark times that I don’t really share with too many people. But I got some strong people in my corner helping me get to where I want to be.”

Some of those people include his coach at LBJ, Jahmal Fenner. Also former Longhorn football player Robert Killebrew, who is a physical therapist now, helped McCutchin get back healthy. Trainer Chux Nwabuko II has also been working with McCutchin for a while.

“You have to be really mentally strong to go through this. You can’t be somebody that is weak-minded and will give up easily,” says McCutchin.

McCutchin says throughout this process he has fallen in love with the grind. He’s also been highly motivated to get healthy and get back on the field. He’s also been humbled and gained new perspective on his passion for football.

“I was pretty arrogant at times. I was pretty cocky at times,” says McCutchin. “This injury really humbled me. It can all be taken away in the snap of a finger.”

With that understanding, he has gotten his knee back ready for his senior season. He hopes to get that chance again to run out onto the field for the first game, but this time do it safely.

“I do think about it more than a young man should,” says McCutchin. “Coming out of that tunnel, playing that first snap, that’s something I think about probably 10 times a day.”

Despite missing his junior season, McCutchin still remained a highly coveted recruit. This past weekend, on July 4, he committed to play in college at Oklahoma.