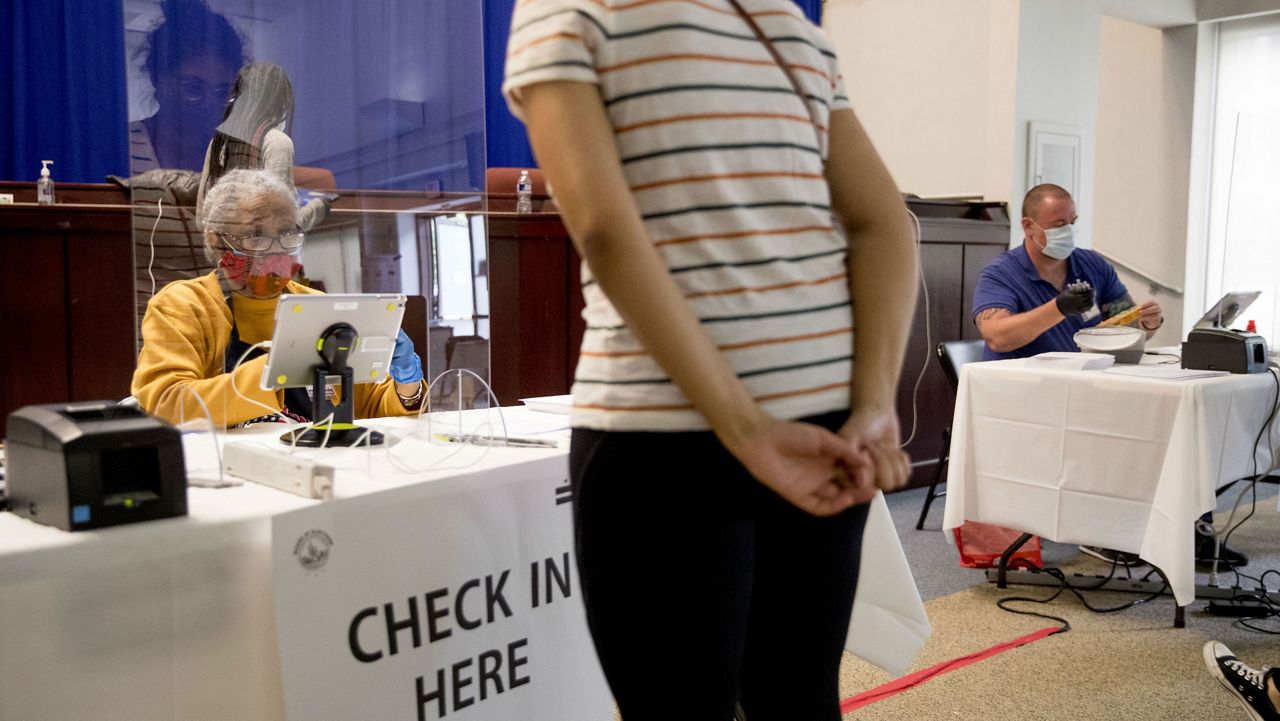 Volunteer poll worker Beverly Talley, left, wears a face mask and gloves as she checks in a voter at a voting center during primary voting in Washington, Tuesday, June 2, 2020. (AP Photo/Andrew Harnik)

AUSTIN, Texas — Early voting for the Texas primary runoff election begins in less than a week. The runoff was pushed back due to concerns about the coronavirus, and some longtime poll workers said they are sitting this one out. Now, civic organizations are hoping a younger demographic will fill the need.

According to county officials for the July runoff, Travis County alone needs 700 poll workers for Election Day, and 280 workers for the early voting period. Joyce LeBombard, former president of the Austin-area League of Women Voters, a group that aims to inform and encourage people to exercise their right to vote, said she believes poll workers will look younger than usual during the pandemic.

“Our poll workers, the average age probably is above 60 to 65, and that's the demographic that is most at risk with the pandemic going on. So, we really need to be able to have some younger poll workers come in to replace those who may not feel comfortable or be able to,” she said.

LeBombard told Spectrum News since former poll workers are not going to risk their health, there is an effort underway to recruit younger Texans to participate in the democratic process.

“Regardless of the pandemic going on or not, having younger generations and people getting involved just helps strengthen our democracy more going forward,” LeBombard said.

As of Tuesday afternoon, Travis County officials said they have filled more than 95 percent of the early voting sites, and 79 percent of the locations for Election Day. Clarke said he plans to also be a poll worker in November.

“It's really important that our democracy has processes and has polls to take people's votes. As soon as that starts falling apart, and people stop caring about it, then we start slipping away from a democracy,” Clarke said.

The runoff was originally scheduled for May, but Texas Gov. Greg Abbott postponed it due to health and safety concerns. He also increased the early voting period to two weeks instead of one. Early voting begins June 29.

For more information about becoming a poll worker visit the League of Women Voters’ website or the Travis County Clerk’s website.