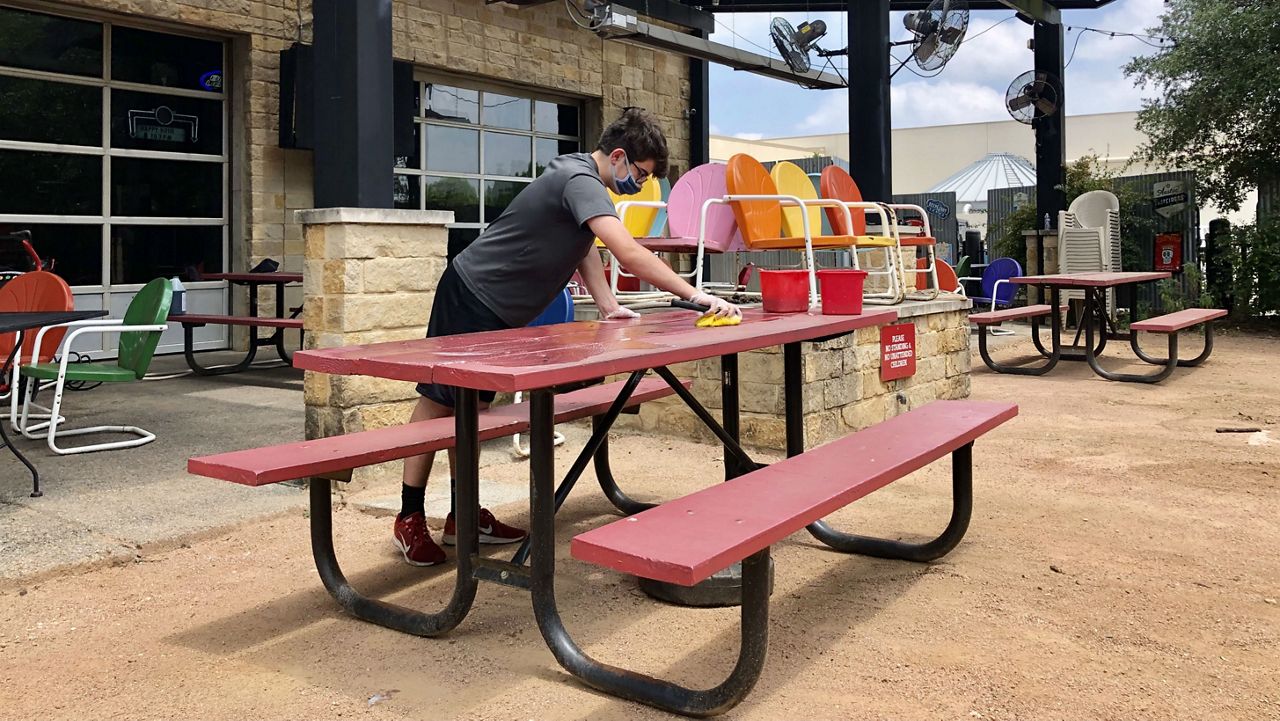 An employee at Doc’s Backyard Grill in Sunset Valley cleans a patio table. The restaurant plans on re-opening at a limited capacity. (Spectrum News)

Restaurant Owners in Texas Consider Options for Reopening in May

AUSTIN, Texas — Texas Gov. Greg Abbott gave the green light for parts of the economy to reopen in May, and now businesses are wrestling with exactly how to go about it. The governor's order lets movie theaters, retail stores and restaurants open this Friday with limited capacity. For restaurants, there are specific rules to follow, and while some owners of restaurants are hesitant, others are using this week to prepare.

State leaders released reports about Minimum Standard Health Protocols for COVID-19 to help guide businesses when it comes to reopening. The checklist for restaurants includes, but is not limited to:

A day after Abbott’s announcement, preparations to reopen were underway at Doc’s Backyard Grill in Sunset Valley, where employees were cleaning and repainting tables. Owner Charles Milligan said the restaurant was on track to have the best March on record. But like most small businesses, they have been losing money for the past few weeks. He hopes by reopening the business will be able to at least break even.

“Kitchen staff will be on a skeleton crew, but we're going to be able to open. We're excited to have that interaction that we’ve been missing. I think it's gonna be great,” Milligan said.

Under Abbott’s executive order, Texas businesses allowed to reopen under Phase 1, must do so at 25 percent capacity. Milligan said most of their seating is outside, allowing employees to be able to spread out tables at least six feet apart on the patio. He said they are also following safety protocols from the state and national restaurant association.

“There's a timeframe where everything has to stopped, wiped down, washed. Change of gloves constantly. It’s a lot. It's a lot of new steps in a dance that no one's ever danced before, so there’s going to be a lot of stepping on toes, but we’ll get through it,” Milligan said.

There will be hand sanitizing stations in the restaurant for employees and they are also working on expanding their online ordering. This way, customers could order their food and drinks from their mobile devices, which works to minimize contact with servers.

One concern remaining for Milligan though is related to unemployment and how the state will handle claims moving forward.

“Some staff members that we've reached out to, to try to come in— ready to open— a lot of them don't want to come back to work because they're making more money being unemployed,” said Milligan.

According to the Texas Workforce Commission (TWC), it is possible those who choose not to return will become ineligible for unemployment benefits, but staff will now be looking at claims on a case-by-case basis. A spokesperson for TWC tells Spectrum News, “Under longstanding TWC policy, previously if an employer offered an individual a job and they refused the job offer without good cause, the employee would not be eligible for unemployment insurance benefits. Recognizing this current, extraordinary situation, TWC is reevaluating good cause situations that take into consideration the governor’s direction towards reopening the economy.”

Other business owners say they will stay closed come May 1. Sue Davis, the owner of Counter Culture restaurant in East Austin, said next week they will start taking orders online to allow for takeout and deliveries. Davis says adjusting to the new system feels similar to starting a new restaurant all over again. After speaking with many of her customers, she said they were fine with just having the takeout options.

“(My employees) all had concerns about it— so have I. I talked to many people, we all think it’s the right thing just to wait it out. I’d rather be on the more cautious side right now,” Davis said.

She is also skeptical about the financial benefits of reopening at a quarter of her typical occupancy.

“I just think of having 25 percent of sales and having a full staff there, or half-staff even. It just doesn’t work for us. It’s not worth it for my servers to be waiting tables and having, you know, 25 percent of business,” she said.

During the stay-home orders, Davis has been using this time to create a new takeout menu to possibly accommodate family-style meals, but it has not been easy to source ingredients.

Before she opens the doors to let customers go inside the restaurant, Davis said she is waiting for the infection rate to go down in Texas and for testing to ramp up.

“I don’t want to be the source of anyone getting sick, so I figure I can wait it out a few more weeks, a month, two months. We’ll have this takeout thing, we’ll provide people with fresh, healthy foods still. Keep people healthy, but safe at the same time,” Davis said.