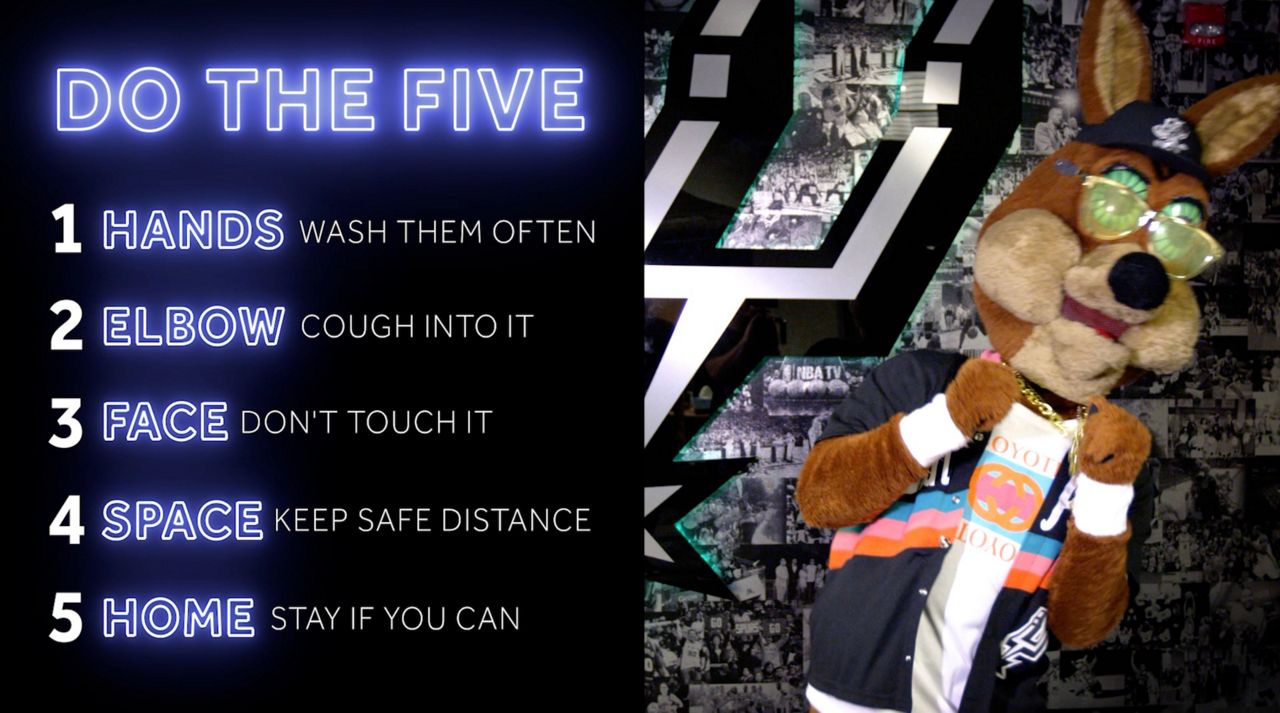 TEXAS -- Do these simple five steps to stop the spread of coronavirus: wash your hands often, cough or sneeze into your elbow, don't touch your face, give space between each other, and stay home.

An Austin-based rapper has teamed up with the San Antonio Spurs to make these steps into a song and produce a "hip-hop health PSA." The song not only features a beneficial way to stop the spread of coronavirus, it also has a pretty fun dance to go along with it.

The "Do The Five" music video features the Spurs Coyote dancing along to the song by artist Tone Royal (who goes by Ray Villarreal off the stage). Villarreal, who is one of the in-arena hosts for the Spurs, was asked by the organization to come up with a song that could teach listeners about the five steps to help stop coronavirus.

The result? A minute-long catchy but family-friendly hip-hop track with the beloved Coyote.

"I immediately was like okay, I want to make it sound like Da Baby or Roddy Ricch or Megan Thee Stallion, like I wanted to make it a turnt up song. I was just kind of like trust me, I’ll do it. It came out to what it is now," Villarreal said. "Was the most challenging thing I've ever had to probably make. Because it's like how do I make this cool? How do I make this fun and also family friendly and health-oriented? And we did it."

The song is featured on the NBA's TikTok account, and the dance has even been done by another famous Texas mascot, Hook 'Em.

"I've had so many people that have messaged me like 'Yo, that song is stuck in my head' or like 'Yo it's a banger, like we've been bumping it in the house, we’re turning up,'" Villarreal said. "I got a call from one of the people in the [Spurs] organization that was just like, 'This is amazing, this is better than anything we expected.' And they were like 'Not that we doubted you, but this is a hard ask, like this is cool.' So yeah, it was cool to hear that feedback right away."

We first caught up to Villarreal back in March after his SXSW Official Showcase was canceled due to COVID-19 concerns. Since then, he's also lost his announcing gigs and callbacks for auditions have been canceled.

"I've been announcing with the San Antonio Spurs for the past, I don't know, three or four years now. They’re a great organization. I announce for a lot of different sports teams and for different events, like I was supposed to be announcing for the Final Four in Atlanta, so I lost that contract. I do some stuff with the NFL Draft, I lost that, NCAA, NBA. So I literally lost all my music income and I lost all my announcing income. So it was just like, wow, this is all hitting me at one time, and it was pretty insane."

Villarreal is now doing odd jobs and working with delivery services like Favor just to bring in some income. So until he’s able to get back to the stage or the arenas, you can find him quarantining at his in-home studio, just maybe creating the next viral hit to follow "Do The Five."

Guess who finally got the #DoTheFiveChallenge dance down! THIS GIRL 🙋🏻‍♀️ Wash yo hands, cough/sneeze into yo elbows, don't touch yo face, gimme (6 feet of) space, and stay @ home! That's how you stay safe, right @SpursCoyote/@ToneRoyalMusic? https://t.co/m5E5RrkfoK pic.twitter.com/uku2xFcaEF

“This is a difficult time, like I've said, and especially in the entertainment business. So y'all be safe out there, wash your hands, don't touch your face, do the dance, check it out and look up Tone Royal. I'm out here making music,” Villarreal said.

The full lyrics to "Do The Five" are below:

Washing your hands do it often (often)

Using your elbows to cough in (*cough *cough)

Touching your face hands off it (off it)

Staying at home what you watching (Netflix)

Reading a book or you blogging (blogging)

Washing your hands do it often

Using your elbows to cough in

Pass the time (do the five)

Washing your hands do it often (often)

Using your elbows to cough in (*cough *cough)

Touching your face hands off it (off it)

Staying at home what you watching (Netflix)

Reading a book or you blogging

Do the five sterilize (2x)

Do the five sanitize (2x)