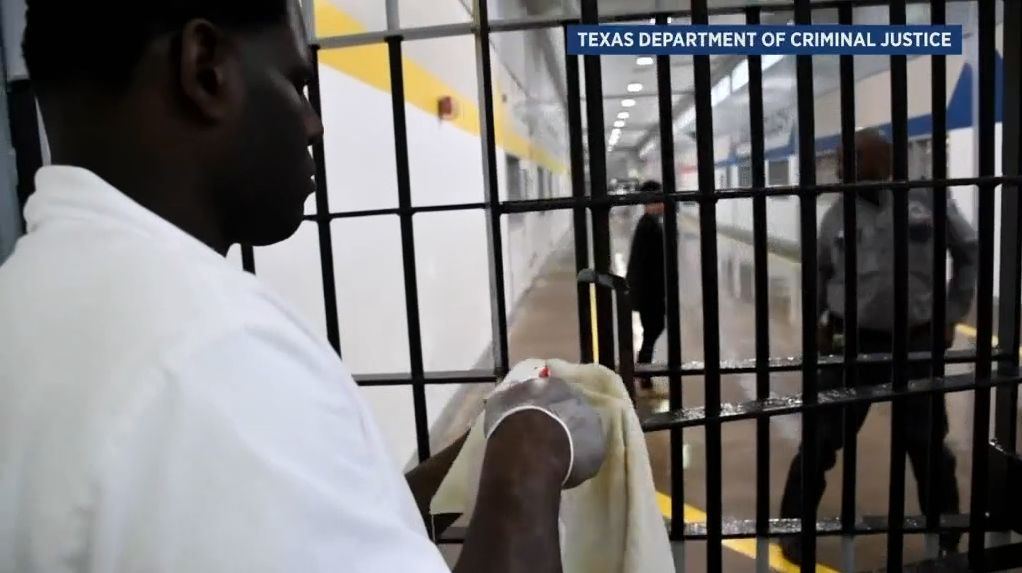 A Texas inmate cleaning inside a prison. (Courtesy: Texas Department of Criminal Justice)

AUSTIN, Texas — As the new coronavirus spreads in Texas prisons and jails, Gov. Greg Abbott issued an executive order Sunday making it more difficult for thousands of inmates to be released. Bail reform advocates argue the order is unconstitutional.

Calls to reduce the jail population heightened following the news that several inmates in two of the state’s largest jails, in Dallas and Harris counties, tested positive for COVID-19 last week. Abbott’s directive blocks inmates accused of or previously convicted of violent crimes from being released without paying bail.

“Releasing dangerous criminals makes the state even less safe. That also complicates and slows our ability to respond to the disaster caused by COVID-19. We want to reduce and contain COVID-19 in jails and in prisons for the benefit of both the inmates as well as the law enforcement officers, the employees, and the staff of those facilities,” Abbott said at a news conference Sunday.

Under his order, defendants who can post bail could still walk free. Amanda Woog, the executive director of the Texas Fair Defense Project, expressed concerns about the public health consequences of keeping inmates in facilities where the risk of infection is high, as well as the order’s implications on indigent defendants.

“It’s not tied at all to public safety. What it's tied to is people's access to money. It's both under-inclusive and over-inclusive,” she said.

Woog said she believes it should be up to local jurisdictions to determine how to prevent an outbreak in jails. She also points to how there are other considerations beyond one’s criminal record, such as, mental and physical health or the weight of the evidence, that determines public safety risk.

“No place that I've talked to is doing mass release or is not considering on an individualized basis who should be released from jail,” Woog said.

Less than a week after Texas Department of Criminal Justice officials announced its first prisoner who tested positive for COVID-19 in Huntsville, it reported another case Monday. According to TDCJ, the 36-year-old prisoner started feeling symptoms associated with COVID-19 on Saturday and was placed in medical isolation, where he remains.

On March 24, TCDJ officials announced that a 37-year-old prisoner who tested positive for coronavirus was in medical isolation and being treated at Hospital Galveston Unit, a Texas prison facility. He was staying in a dorm with 58 other prisoners and they have been placed under “medical restriction” to see if they become ill and in hopes of limiting the spread of the virus, TDCJ spokesman Jeremy Desel said. He described how there are “several layers medicallly” regarding how the department is handling the pandemic.

“We've been limiting their motion as much as possible, limiting their movements and their activities within the system. All visitation has been suspended within our system for several weeks, on order of Governor Abbott,” Desel said.

Also, there are so far seven TDCJ employees or contractors who have tested positive for the coronavirus.

In the past several weeks, prison officials have bolstered efforts to stop the unchecked spread of coronavirus in correctional complexes. They are now conducting screenings of correctional officers, staff members, as well as incoming prisoners. The screenings include a questionnaire asking people about their symptoms, as well as a temperature check. If someone has a temperature of 100.4 degrees or higher, as well as other symptoms, he or she is escorted for further evaluation to determine if that person needs to be in quarantine. Facilities are also being disinfected as much as possible.

“There are times when you won't be able to completely come to this social distancing. What's most important, however, is that once we get to those levels of medical restriction or medical isolation, those offenders’ movement is restricted, and it’s essentially what quarantine would be in the outside world, to keep any possible threat from that illness happening as much as we possibly can,” Desel said.