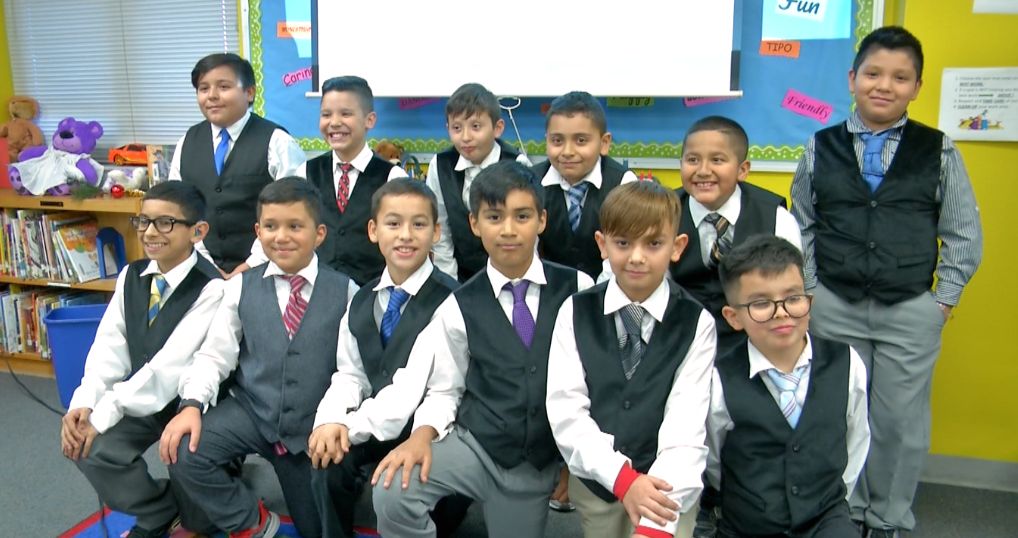 The fourth and fifth grade boys at Briscoe Elementary pose in their suits. (Spectrum News)

SAN ANTONIO - Distinguished gentlemen come in the form of fourth- and fifth-grade boys at Briscoe Elementary. These students are all members of a club called Los Cabelleros Distinguidos and their teacher is on a mission to give them skills that will come in handy throughout their entire lives.

Anna Ulate is a fourth-grade dual language master teacher and the club is her brainchild.

"I have three boys of my own and I see how the need the social skills, the etiquette skills, manners, and I thought maybe I could start an after-school program here," said Ulate.

The club started this school year and has been supported strictly through fundraising. The boys have had lessons in dining etiquette, communication skills, handshaking, and how to tie a tie, among others. Ulate says the lessons fit in the with school's core values and will help them when they grow up.

"Our mission is to instill these values so they can use them later in life in their academic and professional endeavors," she said.

The club received a $500 grant through the SAISD foundation, which helped provide the kids with dress clothes. Ulate said the minute they put on their new suits, there was a clear change.

"As soon as they put the attire on, they stood up straighter, they voiced what they wanted to say. They were in control of themselves, and they've become leaders on campus," said Ulate.

"Nobody has worn these good suits, and they make you feel like more gentlemanly," said student Christopher Rodriguez.

So far, Los Caballeros Distinguidos has been a hit, and organizers are hoping it continues for years to come.

"I like to say they are already gentlemen. Somebody just needed to give them an opportunity to show it.'" said Ulate.