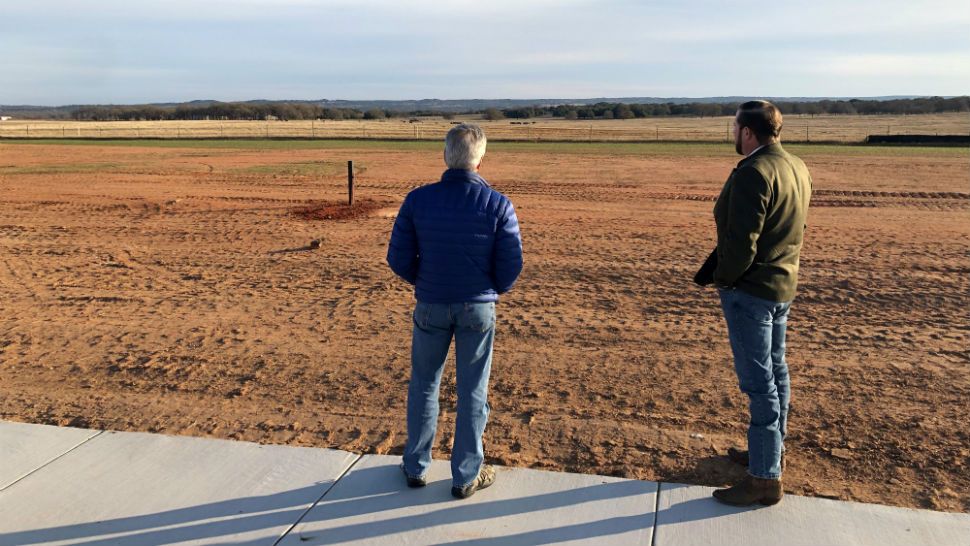 L-R: Bruce Shipman and Thomas Peterson overlook a vacant lot that is part of the Frieden development in Fredericksburg, Texas. (Lena Blietz/Spectrum News)

FREDERICKSBURG, Texas — A new community is coming to the Texas wine country, with promises of homes straight out Southern Living magazine.

“A front porch, walk down the street, leave the car at home, go out and meet people,” describes Thomas "Thor" Peterson, the developer of Frieden. “All of our community spaces are open and designed to gather people together.”

Located on 260 acres, Frieden is one of 13 designated Southern Living-inspired communities. Homeowners will stick to strict aesthetic guidelines from overall style to building materials to types of plants.

“In building a custom home, or adapting anything for a custom home, you want to be in a price range where other people are going to be doing the same thing,” said Bruce Shipman, a future Frieden resident.

Future homeowners can choose between using the developer’s architect or they can use their own, with approval.

“Fredericksburg had been waiting for a project like this for a long time and it was something that nobody thought could be put together,” Peterson said.

Lots are available in three sizes, ranging from one-fourth of an acre to a full acre.  Homes start at about $500,000 for the smaller lots and around $1 million to $1.5 million for the larger lots.

Frieden developers consider the project to be the first of its kind. Lots and roads are being designed around the natural landscape and existing trees.

“It may seem a little Norman Rockwell, but I wanted a community where kids are still out on their bikes and fishing in the lake until dark,” Peterson said. He’s lived in Fredericksburg for 15 years, after falling in love with the town back in his college days at Texas A&M.

For Bruce Shipman, the decision to build a home here came after his daughter and son-in-law decided to open a winery in Fredericksburg. He will be helping the couple with their new business, but unlike his daughter, Shipman and his wife don’t plan to live there full time.

Peterson said they have a mix of residents who plan to live in Frieden full time, especially retirees, and buyers who will use their new home as a vacation house.

Frieden began accepting residents in November, with plans to begin construction in January. The first move-in dates are tentatively scheduled for October 2020.

The community also plans to add a resort, retail shopping and professional offices, but a timeline for those projects has not been released.