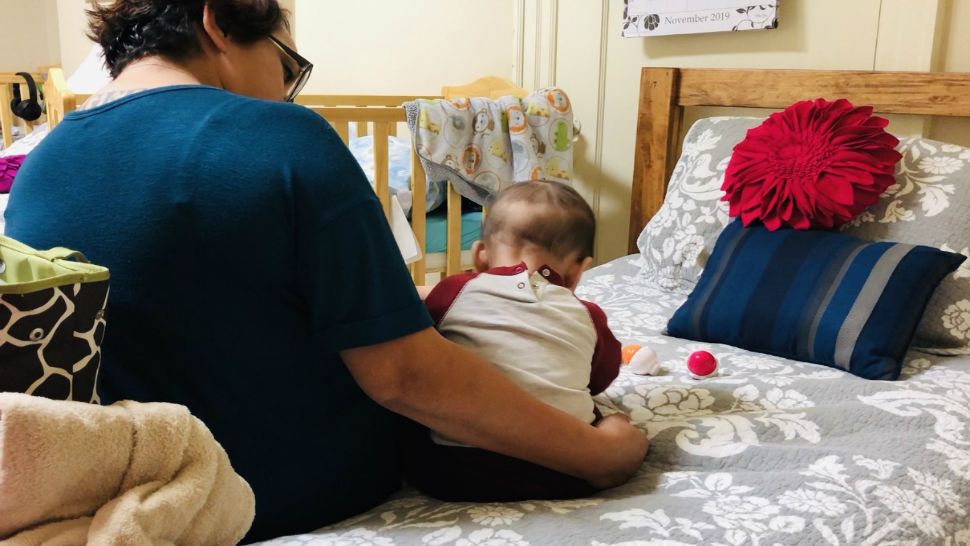 Melissa Salais and her child, AJ, appear at Casa Mia in San Antonio, Texas, in this image from November 2019. (Alese Underwood/Spectrum News)

Casa Mia Helps Dozens of Mothers in Recovery Since December 2018

SAN ANTONIO -- As we continue to bring you stories surrounding the opioid epidemic across the country and in our local communities, we turn our attention to neonatal abstinence syndrome. One-third of all the cases in Texas are reported in Bexar County.

Each year 300 to 400 babies in the San Antonio area are born withdrawing from opioids. That's the same number as Dallas-Fort Worth and Houston combined. Seventy percent of women with substance use disorders have children, yet only 3 percent of recovery housing offers beds for children. Since December 2018, a safe haven known as Casa Mia has allowed mothers and babies to stay together during recovery.

"He was a miracle," said Melissa Salais when talking about her 9-month-old son AJ.

They live at Casa Mia with more than a dozen other mothers and their babies. AJ has his crib and toys, Salais has her bed, and they share a corner. It doesn't look like much, but she says it's exactly what they needed.

"I was a heroin user for about 10 years. I lived in the streets. I was homeless. I had no hope for life. Once I found out I was pregnant, I knew it was time to change everything and fix my life for him," she said.

Fixing her life brought her to Casa Mia.

She takes AJ to daycare, goes to work, and focuses on her recovery. It's working.

"You kind of never know what's going to happen when you put a bunch of women together in a house. You hope it's going to be good," said Dr. Lisa Cleveland with UT Health San Antonio School of Nursing.

Cleveland is one of the many advocates that helped get this going. Substance use often damages families and friendships, so she says women like Salais have a better chance at reaching their goals if they can keep their babies with them instead of turning to foster care.

Everything at Casa Mia is free, including diapers, food, and rent, but the moms have to do their part.

"The ladies have to sign in, sign out. They have to call when they get where they're going, call when they're on their way back. That gets old after a while. So we see at about six months ladies are pretty much ready, but there's no definant cutoff," Cleveland said.

If a mother breaks the rules, that doesn't automatically mean she's back out on the street.

"We have had women who have broken the rules. That's not an automatic 'you're thrown out,' that's a let's sit down and talk about what's going on," Cleveland said.

Every woman is in a different stage of recovery. Salais already sees a better life. She wants to go to college and eventually help women life herself.

"I'm 11 months clean so I'm very new to all of this. It took me a long time to realize that I am worth it," she said.

Over the past year, about 35 women and 15 children have successfully gone through the program.

Casa Mia is a partnership between Crosspoint and the UT Health San Antonio School of Nursing. It's funded by the Texas Department of State Health Services, the Baptist Health Foundation, and the Sisters of the Holy Spirit. Child Protective Services makes referrals to Casa Mia and women are monitored through the programs in which they are enrolled.

To get in touch with Casa Mia, call 210-632-4845. Women, friends and family members may call this number in order to inquire about the program.

Melissa Salais and her child, AJ, appear at Casa Mia in San Antonio, Texas, in this image from November 2019. (Alese Underwood/Spectrum News)