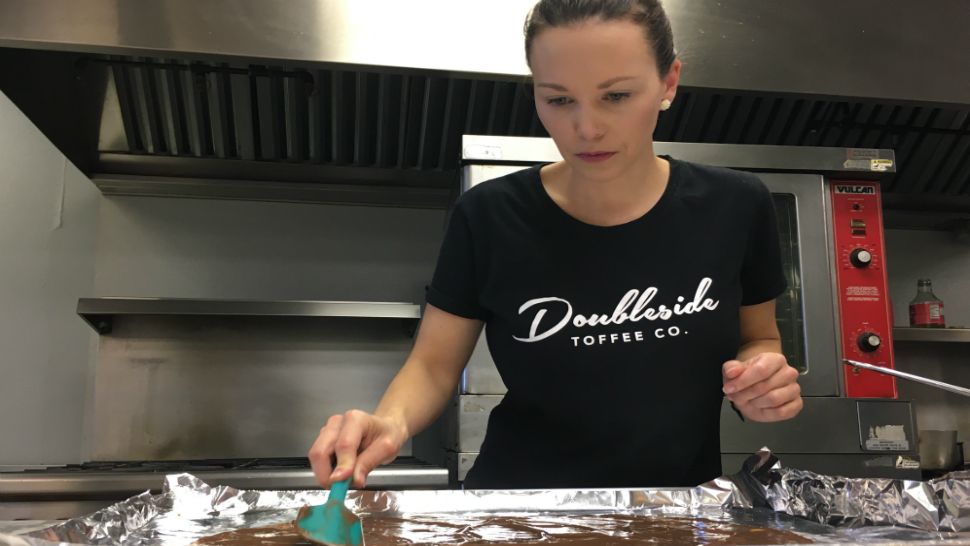 Janessa Sullivan makes her toffee inside Alamo Kitchens in this image from November 2019. (Lauren Due/Spectrum News)

SAN ANTONIO -- It's almost the season of giving, but there's a stay-at-home mom who does it all year round. Her toffee is not only a gift but also gives back to others.

"Doubleside was just perfect because it has double meaning," said Janessa Sullivan, owner of Doubleside Toffee Co. "I have double coating of chocolate on my toffee."

But Sullivan says these treats are not only a gift. A portion of proceeds give back to local faith-based nonprofits. Sullivan is a stay-at-home mom to three kids and has one delicious toffee recipe that started in her very own kitchen.

"The response was overwhelming, and so I had so many people that wanted me to ship or be able to sell in stores that I looked into a commercial kitchen space," said Sullivan.

"We are the place you come to cook," said Tracie Shelton, owner of Alamo Kitchens.

Alamo Kitchens was exactly the spot Sullivan was looking for. She was able to churn out more than 400 pounds in a year.

"I love economic development and entrepreneurship," said Shelton. "So this becomes a way for me to help small businesses grows."

"So I started out only making toffee and then I also started making a toffee popcorn and then a savory, roasted rosemary almond," said Sullivan.

Selling a treat to do something for others. It's what Janessa is doing now after a good friend motivated her to start the business.

"It's amazing how much just one person can make a difference in another person's life by just being supportive and telling them that you're worthy and you can do something," said Sullivan.

A leap of faith to make a small treat is making big changes for many.