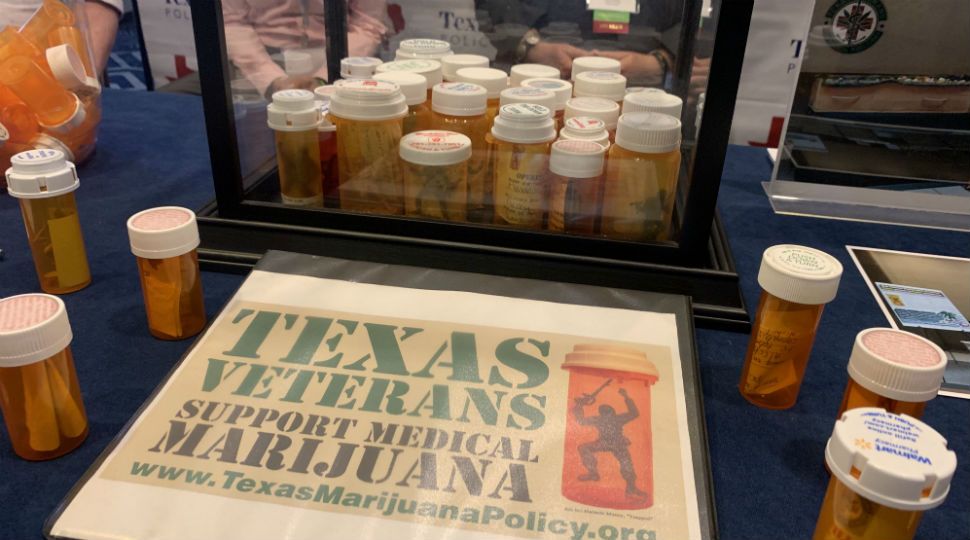 An art piece with messages in pill bottles called "Operation Trapped". Each pill bottle belongs to a veteran, carrying a note saying why they want a medical marijuana program in Texas August 31, 2019 (Spectrum News)

AUSTIN, Texas -- Advocates for marijuana reform were in Austin this weekend for the second annual Texas Marijuana Policy Conference.

Members of the Texas Veterans for Medical Marijuana participated in the conference, continuing their push for legislation to expand medical marijuana access to treat PTSD.

Their message was encapsulated by an art piece called "Operation Trapped," made up of hundreds of pill bottles.

“The pill bottles are very important. They symbolize a veteran trapped in the pharmaceutical, the routine," said veteran Robert Head.

Each pill bottle belongs to a veteran, carrying a note saying why they want a medical marijuana program in Texas.

“Our message in a bottle to Governor Abbott and our legislators is that we choose this natural medicine rather than the pills," said David Bass, veteran and founder of Texas Veterans for Medical Marijuana.

“Cannabis gave me my quality of life back. It gave my wife a husband back, gave my kids their dad back," said Jason Walker, an Army veteran.

“It allowed me to be a father again, and a husband," said veteran Joshua Raines.

“I sleep great. I don’t have nightmares. I’m not paranoid. I’m not hyper vigilant. I feel like myself again," said Bass.

They say an expanded medical marijuana program for veterans will save lives.

“I’ve lost more friends to suicide than I have in combat and so you know, it became a point where it was less about cannabis and more about just saving my brothers and sisters," said Raines.

The hope is that their stories resonate with lawmakers at the Capitol.

“We’re really focused between now and 2021 on reaching out to every one of our senators with our stories, to tell them that that we need the Senate to pass a medical marijuana bill next legislative session," said Bass.