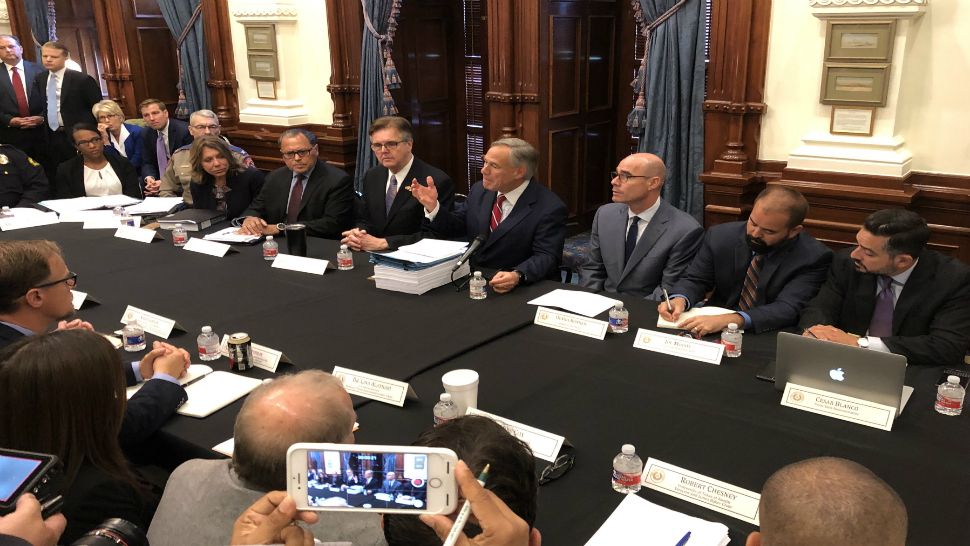 Texas Gov. Greg Abbott and other state leaders meet with safety experts and educators at the first meeting of the Texas Safety Commission in Austin, Texas, in this image from August 22, 2019. (Ed Keiner/Spectrum News)

AUSTIN, Texas -- Thursday Gov. Greg Abbott held the first meeting of the newly formed Texas Safety Commission. The goal is to devise policy solutions in the wake of the deadly shooting targeting immigrants and Hispanics earlier this month in El Paso.

"We as a state have to do a better job just with our existing laws," Abbott said.

Abbott led a discussion with other lawmakers, law enforcement and tech giants Thursday. After more than four hours in private, the governor publicly ran down a long list of items discussed.

"Our goal though is to use a domestic terrorism law that will allow us to go after, arrest and prosecute those who want to commit domestic terrorism before they commit their act of violence like what happened in in El Paso," said Abbott.

Today we had hearings responding to the tragic shooting in El Paso.

"In every instance there was something that was said, there was somebody that knew something in that point in time. And in retrospect if they'd reported that, we would have had an opportunity," said McCraw.

Gov. Abbott also brought up more politically sensitive issues related to guns like red flag laws, background checks and assault weapons, but admitted none were resolved during the discussion.

Outside the Capitol as the commission met, gun rights advocates warned the newly-formed commission about infringing on their second amendment rights. One of the speakers was Stephen Willeford, the man who took down the gunman in the 2017 Sutherland Springs church shooting.

The El Paso delegation of democrats who were part of the discussion remained hopeful, saying nothing was ruled out, and are ready to find solutions so such a tragedy never happens again.

"In an effort to make sure that those 22 individuals that were killed, there's some kind of justice, some kind of remedy, so those things don't happen again," said Rep. Cesar Blanco, (D) El Paso

The Texas Safety Commission meeting will be on August 29 in El Paso.

Abbott has also assembled a Domestic Terrorism Task Force in the wake of the El Paso attack. Its first meeting is set for August 30.