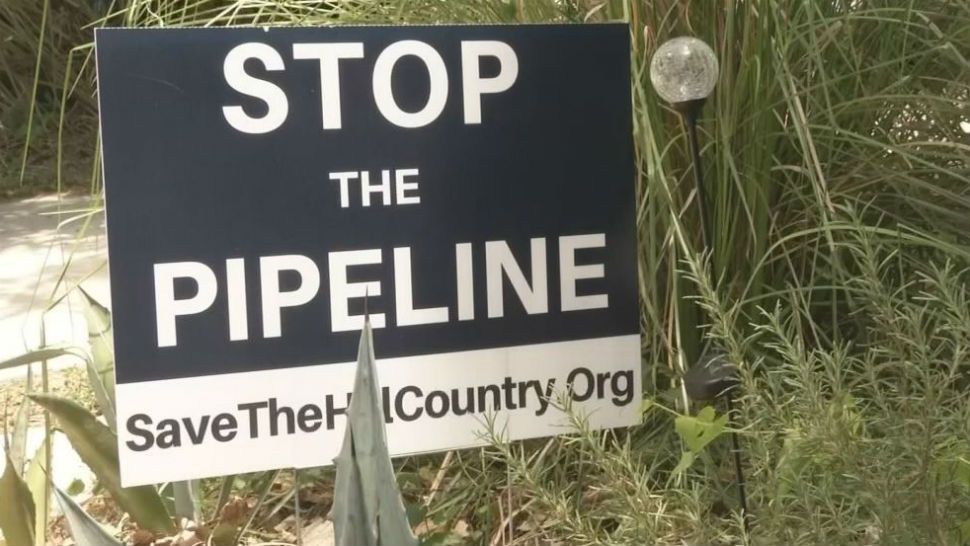 A sign that says "Stop the Pipeline." (Spectrum News Footage)

SAN MARCOS, Texas —A second round of lawsuits are underway in an effort to stop a massive natural gas pipeline from running right through the Texas hill country.

Hays County is teaming up with landowners and conservation groups, threatening to sue the U.S. Army Corp of Engineers, the U.S. Fish and Wildlife Service and Kinder Morgan. Now, the energy giant behind the project is firing back.

"No matter what kind of precautions you take, there's always a risk of pollution," said Haggard.

The worry extends beyond the banks of the river. Signs protesting the project can be found all around town. A failed round of lawsuits by opponents have inspired a second round. This time, Attorney David Smith is representing groups targeting Kinder Morgan's permitting process.

"They're doing less than the bare minimum," said Smith.

Smith claims the energy giant behind the project has applied for permits that only cover about three percent of the 430-mile natural gas pipeline.

"What Kinder Morgan wants to do, is they want to get Fish and Wildlife Service's blessing, coverage, if you will, for the entire pipeline," said Smith.

In addition to lawsuits, the City of Kyle, who's also a plaintiff in the case,  has imposed fees on Kinder Morgan to deter their project. Kinder Morgan officials call this unconstitutional and are firing back with a suit of their own. They told us in part: "Pipelines are already heavily regulated by both state and federal agencies that are dedicated to ensuring the safety of people, wildlife, property and the environment."

Smith argues that energy companies should be required to follow the same protocol for industrial projects that cities and counties do.

"What our clients want to see is a, is Kinder Morgan to be held accountable to the same standards that everyone else is," said Smith.

There are now three additional landowning families involved in these lawsuits, as well as the Travis Audubon Society.

Landowners Fighting Back Against 430-Mile Pipeline