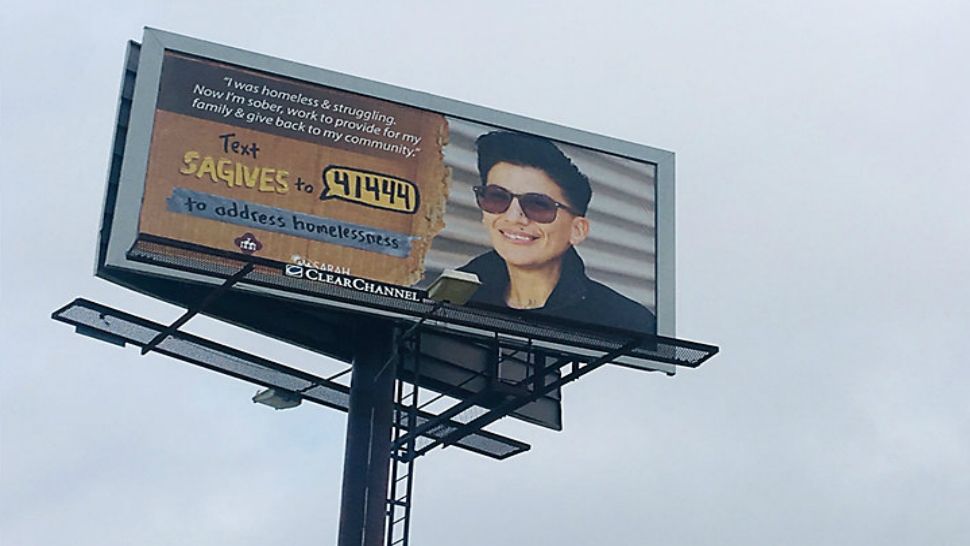 A billboard advertises San Antonio's Change the Way We Give in this image from May 17, 2019. (Alese Underwood/Spectrum News)

SA Launches 'Change The Way We Give' Campaign

SAN ANTONIO - There's a new campaign to help those in need in San Antonio called the Change The Way We Give.

If you've driven around the Northwest part of town, you might have already noticed the new billboards going up.

"All my life I've been in construction in one place or another and the housing industry hit," said program participant William Gilliam.

Gilliam has been through a lot.

"Within six months I lost everything I saved in my life. I went up with a bag with all my goods and clothes and laid down on the side of First Presbyterian and just cried," he said.

He's gone from sleeping with his face on the side of the road to being above it. He's going to be featured on one of the campaign's new billboards.

All you have to do is send a text to 41-444 and say SAGIVES and the city says you can feel confident your money is going places for good instead of having it fall into the wrong hands.

All four billboards are in District 8 so far, but they will be expanding to all parts of the city.

"It's an increasingly disturbing problem happening up here on the North Side far, far away from the homeless shelter," Pelaez said.

Money collected goes directly to the South Alamo Regional Alliance for the Homeless or SARAH, and from there it'll go to help 12 organizations in town including veterans groups and women's shelters.

"All of these organizations, although they have different missions, they have one thing in common: that's helping individuals that do not have a home currently," said SARAH Executive Director Brenda Mascorro.

Supporting the program doesn't mean ending your giving, but redirecting your generosity just as William redirected his life.

He was homeless and now he's a peer support advocate.

"You're desperate and you need something to drink and I know that side of the road, but we're not helping people by enabling them to continue on. Change is about realizing the future," Gilliam said.