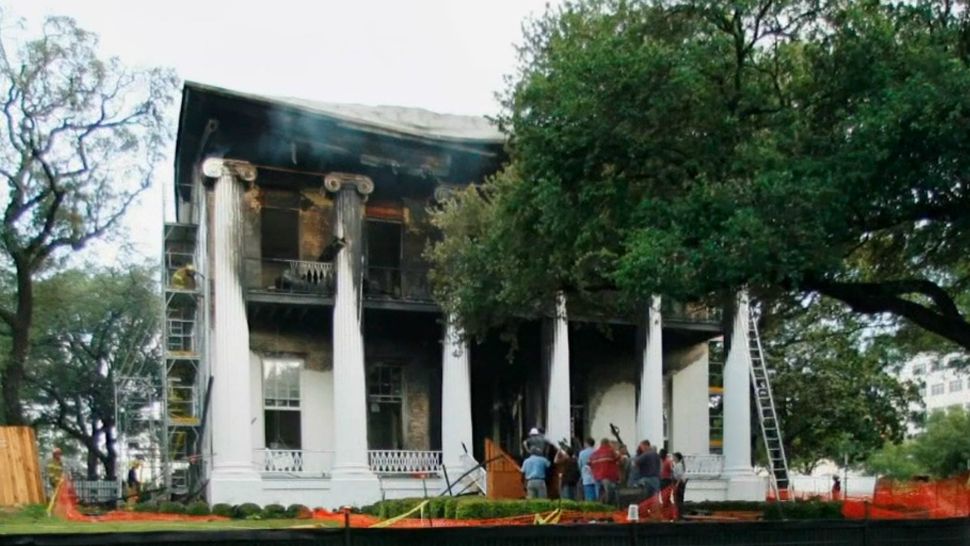 The Texas Governor's Mansion is heavily damaged from a fire on June 8, 2008. (Spectrum News/File)

AUSTIN, Texas -- It's been 10 years since an arsonist nearly burned down the Texas Governor's Mansion.

The mansion today shows no signs of the peril it faced June 8, 2008. That’s when a man with a Molotov cocktail set fire to the historic home that's stood since 1854. Luckily, no one was living there at the time due to a major renovation project. But the search for the suspect is still unsolved.

The fight to save the pillar of Texas history began around 1 a.m. Crews got the call for a fire near 10th and Lavaca streets.

"The only thing I could think of was the Governor's Mansion," said Capt. Andy Reardon of the Austin Fire Department.

Reardon was among the dozens of firefighters who battled the four-alarm fire. He and Fire Specialist Kelly Gall still work at Austin Fire Department's Downtown Station.

"We pulled up. We just saw a lot of flames, a lot of fire on the front porch area where the front door is," Gall recalled.

"There was fencing up that we had to get through to actually be able to get our hoses up to where we needed to get them," Gall said.

The First Family, Rick and Anita Perry, was not living in the Governor's Mansion at the time due to the renovations. That meant fewer security guards were on site at the time. The mansion grounds were also littered with large trenches from the renovation work.

"After we had been spraying water for 30 minutes on it, those trenches basically became motes," Reardon said.​

Crews battled the fire into the next morning from the ground, inside and above. The pre-Civil War estate built of thick wood beams had no sprinkler system at the time.

"To this day, I am still surprised that building actually made it out," Reardon said.

Gregg Cox was the head of Travis County's Special Prosecutions Division at the time and focused on getting everyone to work together.

Investigators searched social media for any posts hinting at a possible attack on the mansion but found nothing.

"It could just be someone who is angry at government in general, and that is a pretty large group," Cox said.

After more than two years of tracking down leads, investigators released sketches of a possible suspect.

"They offered a reward,” Cox said. “They ended up showing the video of the guy actually throwing the Molotov cocktail, hoping that would generate some leads. All of those ended up failing."

Ultimately leading to a case that is seemingly at a dead end.

Click the video link above to watch Capital Tonight’s special program looking back at the fire, the investigation and the first responders who worked to save it.