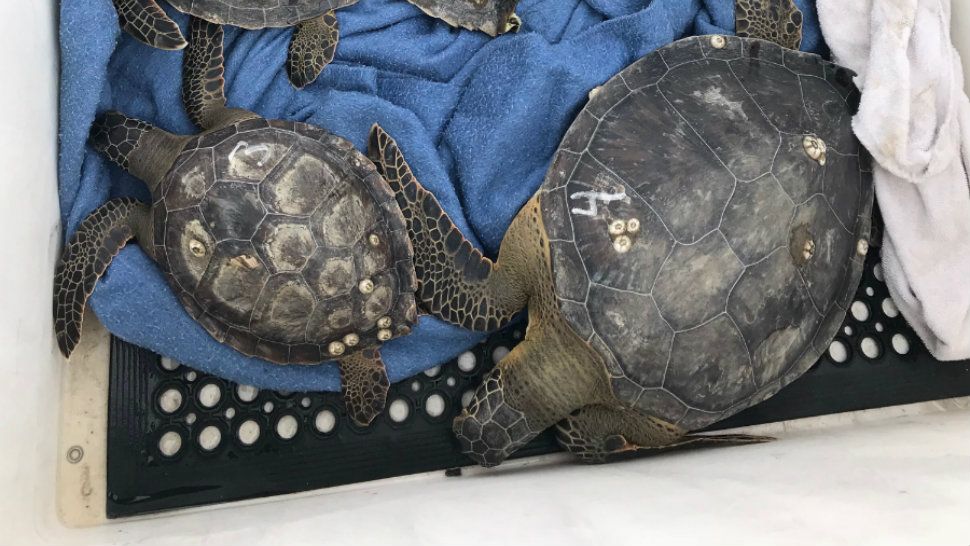 SAN ANTONIO - A group of sea turtles along the Texas coast got the lift they needed. About 200 turtles were picked up by SeaWorld San Antonio to escape the chilly water.

"They become what's called cold-stunned and the turtles pretty much become immobile. They can't do anything," said Joe Keyon of SeaWorld San Antonio. "If no one comes to intervene, the turtles could die."

On Monday, a team brought a boat down near Corpus Christi to assist the National Park Service in their rescue efforts.

"When we find a turtle, what we do is we mark the location, mark the turtle. We have a tub that sits on the boat where we put the turtles into where its warmer," he said.

Among those on the mission is Christoper Havel. A seasoned aquarist, Havel said the recent cold front made the shallower water a dangerous place for turtles to be.

"You could see them everywhere, floating anywhere in the water and I mean, you could pick up five, 10, 12 at a time," he said. Since 2013, SeaWorld has assisted in these turtle rescues. This mission, they believe, will be their largest one yet.

"This is by far the worse I've ever seen it and I would venture to say it's going to be a record breaker for the state of Texas," said Havel.

"It's pretty brutal, it's, you know, in the teens or mid twenties, and they are having to reach down in the water and get these turtles," said Joe.

The task, though challenging, is rewarding for the SeaWorld team.

"When I know these animal are in trouble, I'm willing to get over there and help these guys," said Havel.