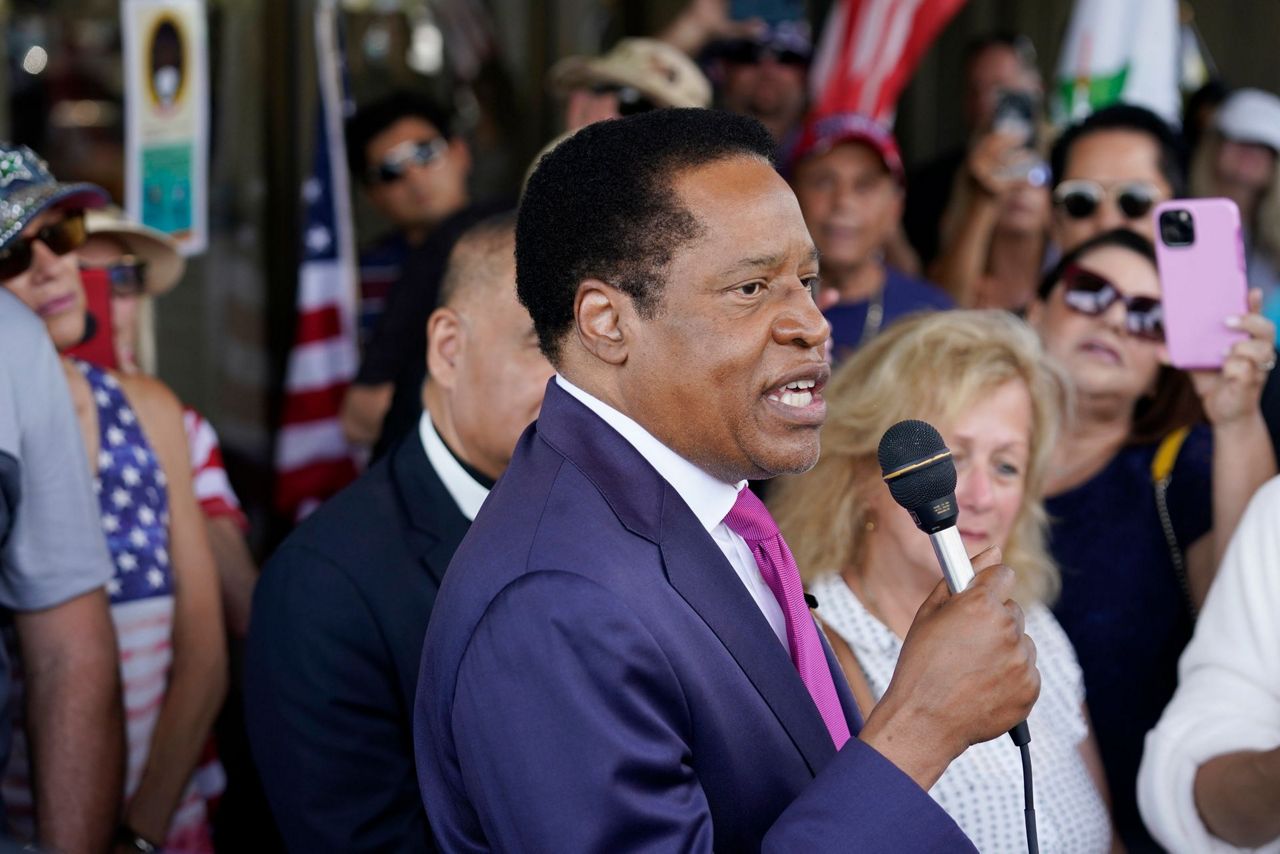 1 of 8
FILE - In this July 13, 2021, file photo, conservative radio talk show host Larry Elder speaks to supporters during a campaign stop in Norwalk, Calif. Elder was not on the list of candidates released Saturday in the recall election that could end the term of California Gov. Gavin Newsom. (AP Photo/Marcio Jose Sanchez, File) 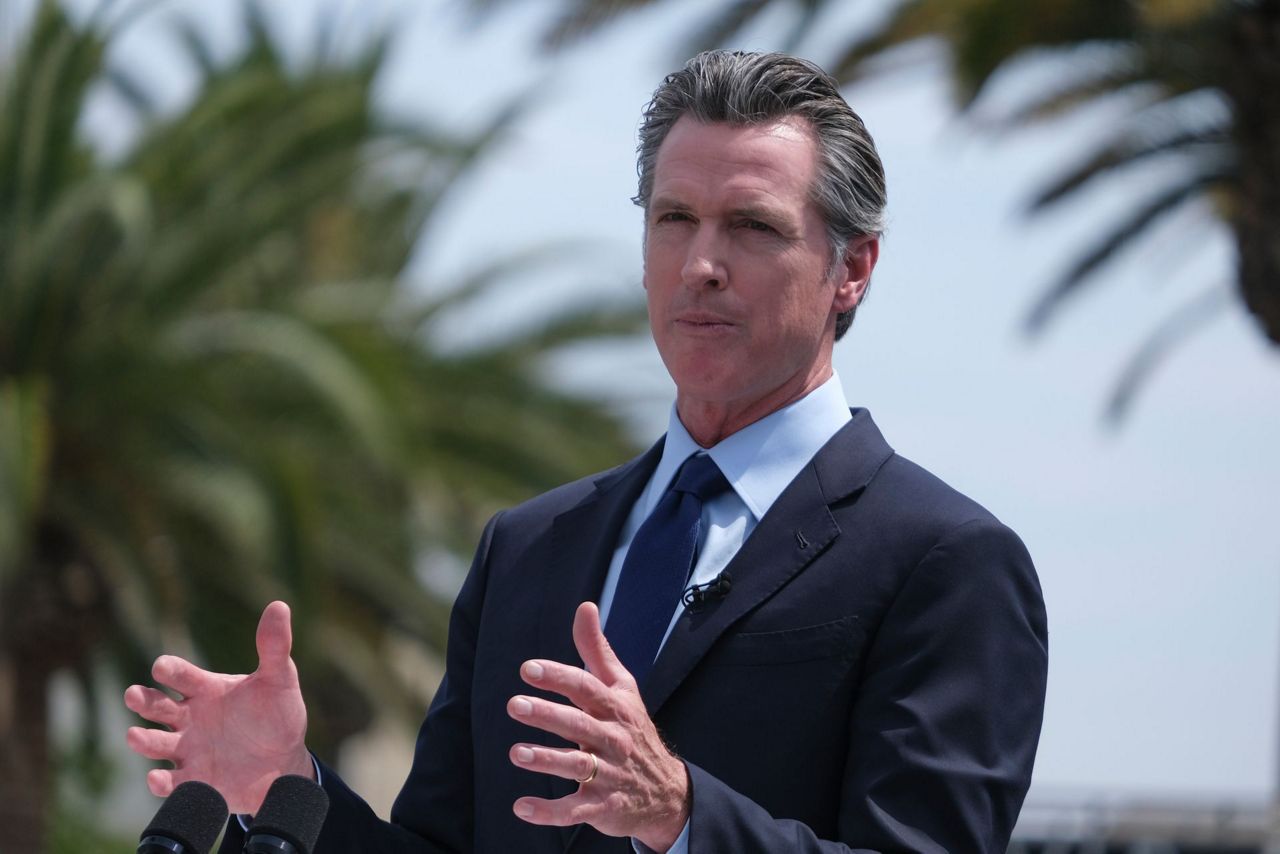 2 of 8
FILE - In this June 15, 2021, file photo California Gov. Gavin Newsom talks during a news conference at Universal Studios in Universal City, Calif. California on Saturday released a list of 41 people who filed the required paperwork to run in the Sept. 14 recall election that could remove Newsom from office. (AP Photo/Ringo H.W. Chiu, File) 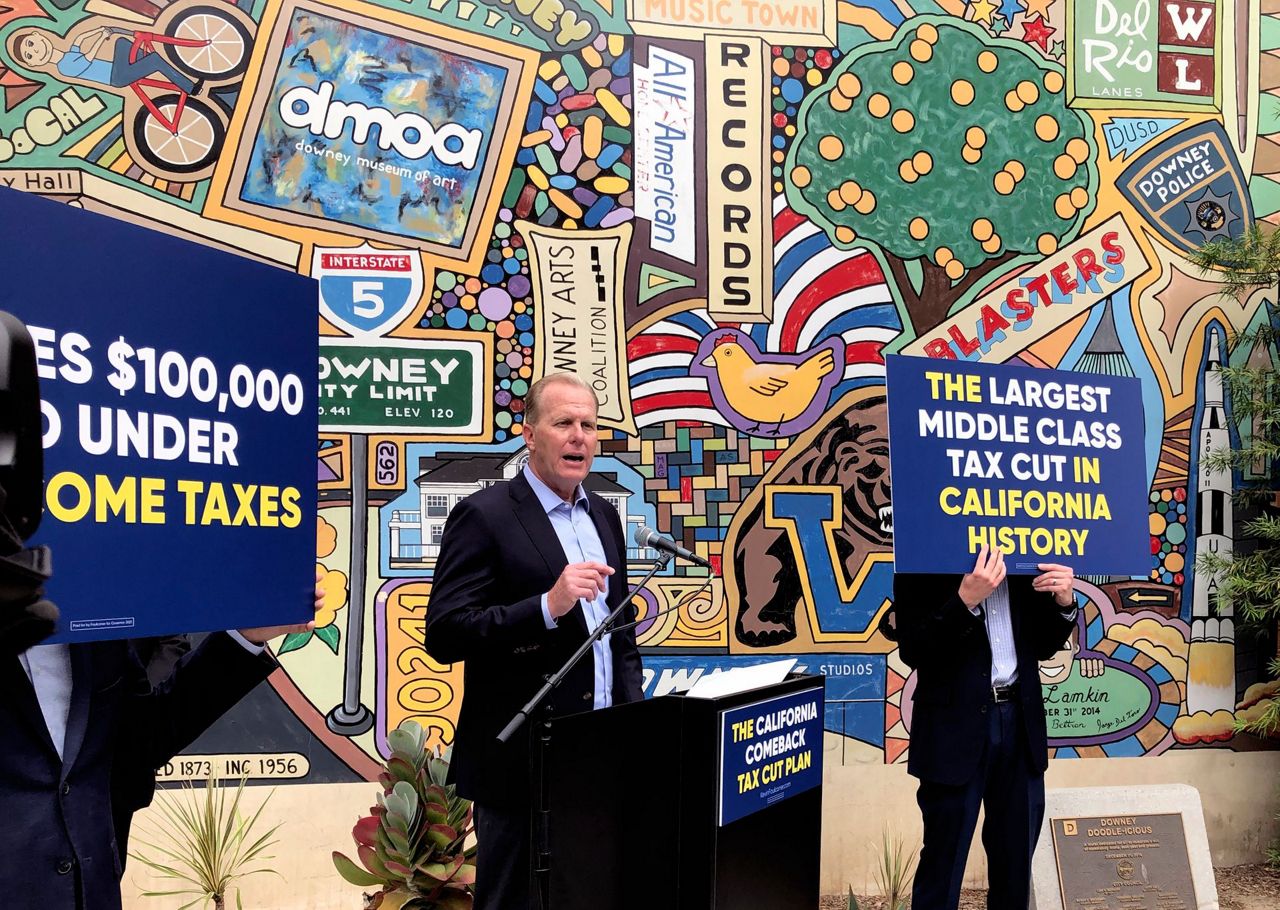 3 of 8
FILE - In this May 12, 2021, file photo, Kevin Faulconer, a Republican candidate for California governor, speaks during a news conference, in Downey, Calif. Faulconer was twice elected mayor of Democratic-leaning San Diego and left office last year. He was an early entrant in the recall race and has long been seen as a potential statewide candidate, given his centrist credentials in strongly Democratic California. (AP Photo/Michael R. Blood, File) 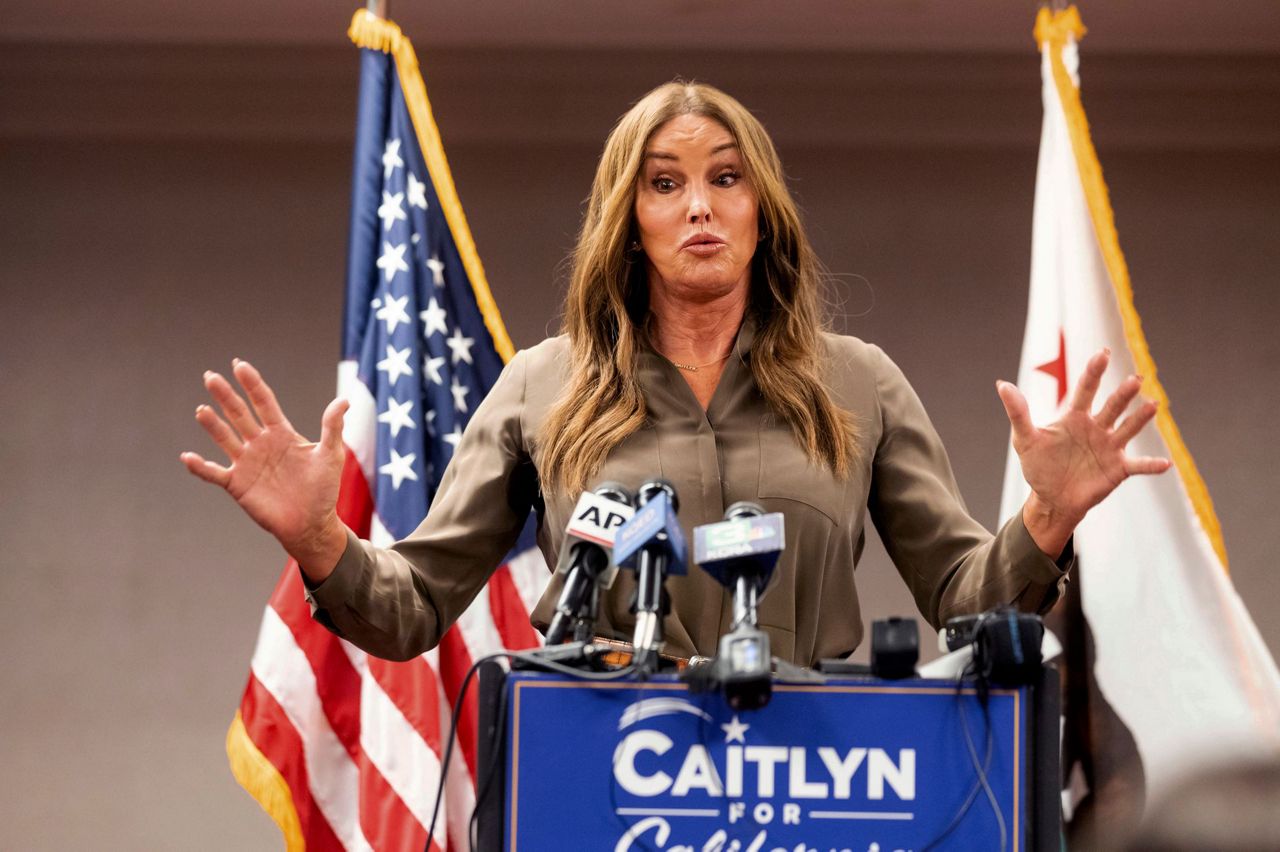 4 of 8
FILE — In this July 9, 2021,file photo Caitlyn Jenner, a Republican candidate for California governor, speaks during a news conference in Sacramento, Calif. Jenner has described herself as a fiscal conservative who is liberal on social issues. But she’s proven gaffe-prone in interviews. (AP Photo/Noah Berger,File) 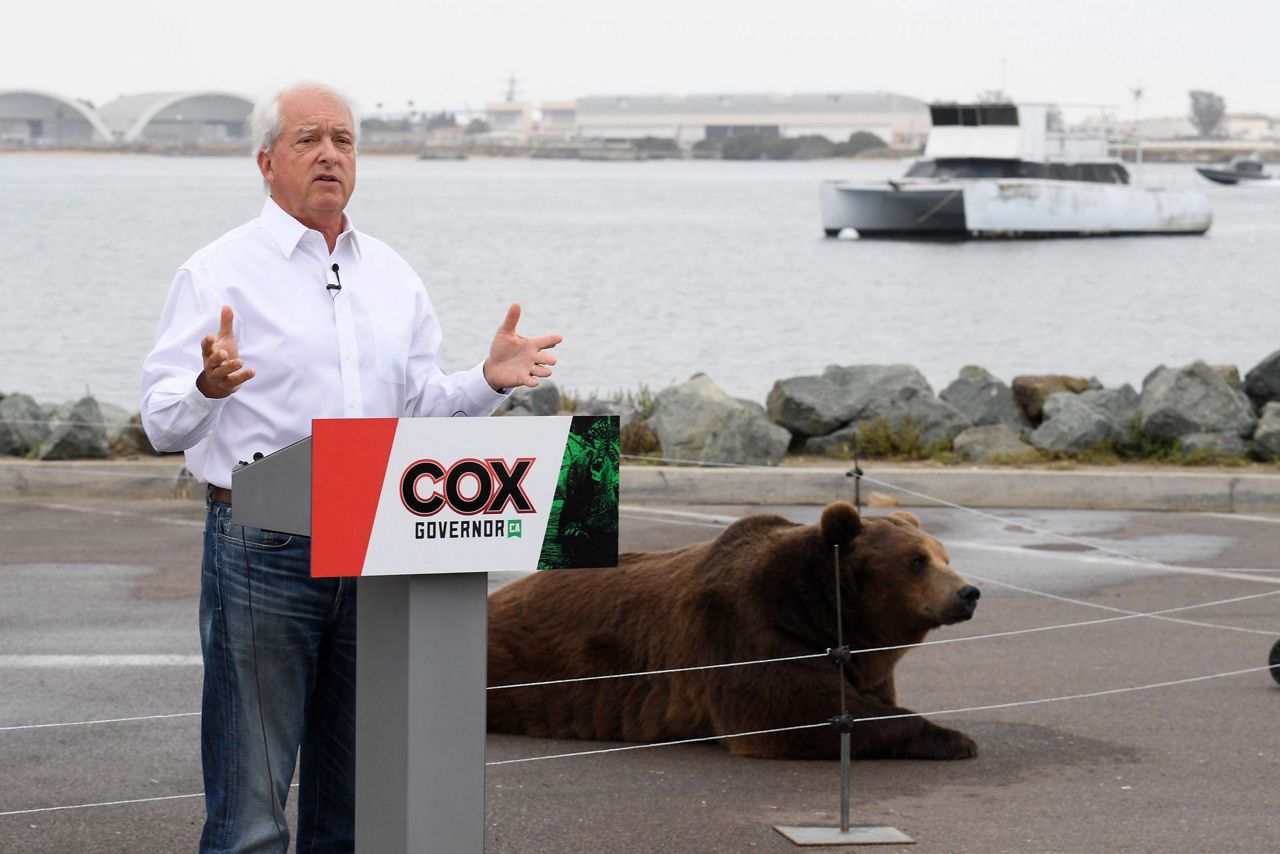 5 of 8
In this May 11, 2021, file photo California gubernatorial candidate John Cox speaks in front of his Kodiak bear at a campaign event held on Shelter Island in San Diego. Cox was the Republican nominee for governor in 2018 and lost to Newsom in a landslide. This time around the multimillionaire businessman has displayed a showman’s instincts. (AP Photo/Denis Poroy, File) 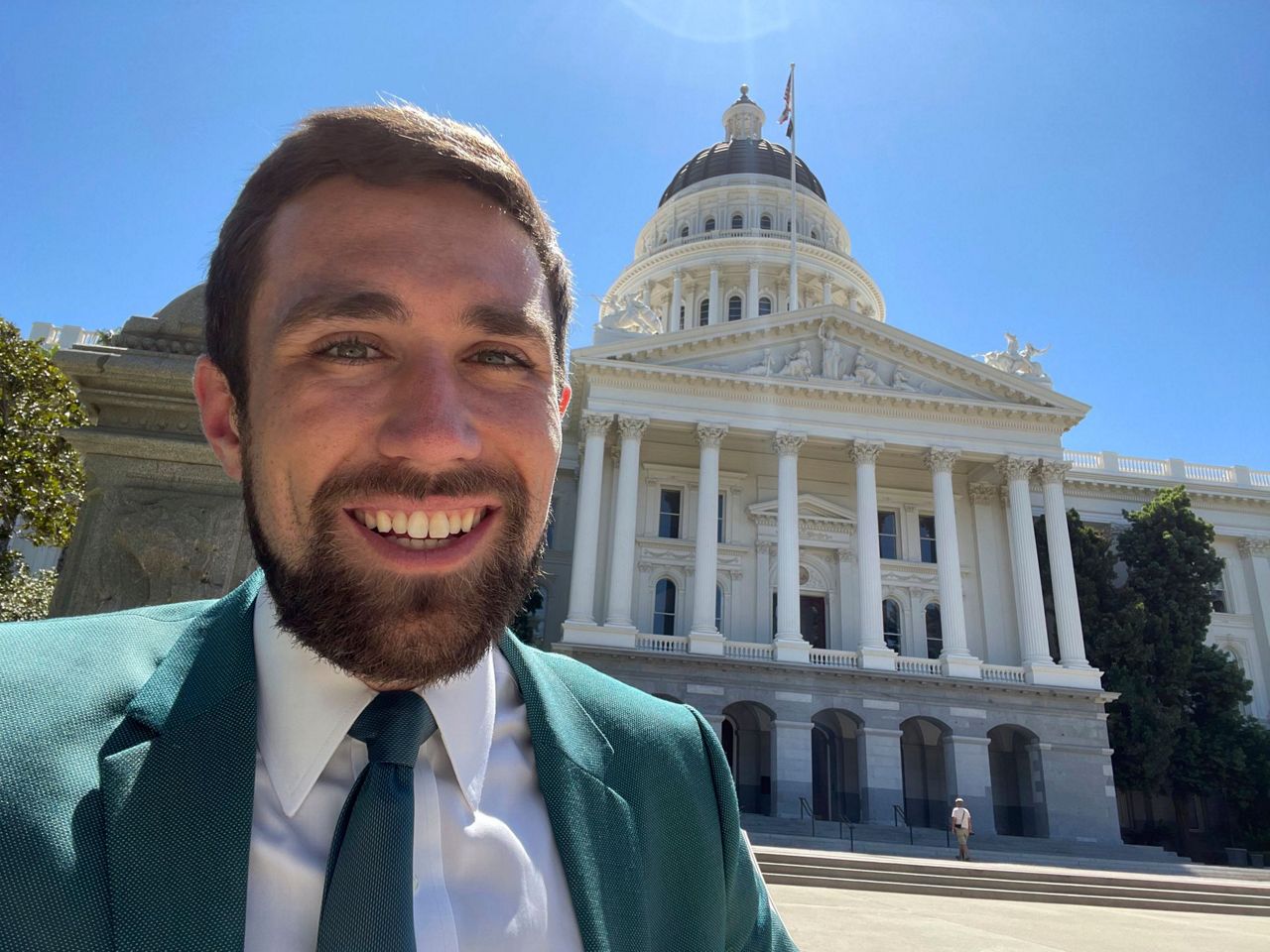 6 of 8
In a photo provided by Kevin Paffrath, Kevin Paffrath smiles for a selfie in front of the California State Capitol in Sacramento on Friday, July 16, 2021. The 29-year-old YouTuber is one of the Democrats running in the recall against California Gov. Gavin Newsom. Paffrath's videos typically touch on real estate and investment advice, and he's never held public office. (Kevin Paffrath via AP) 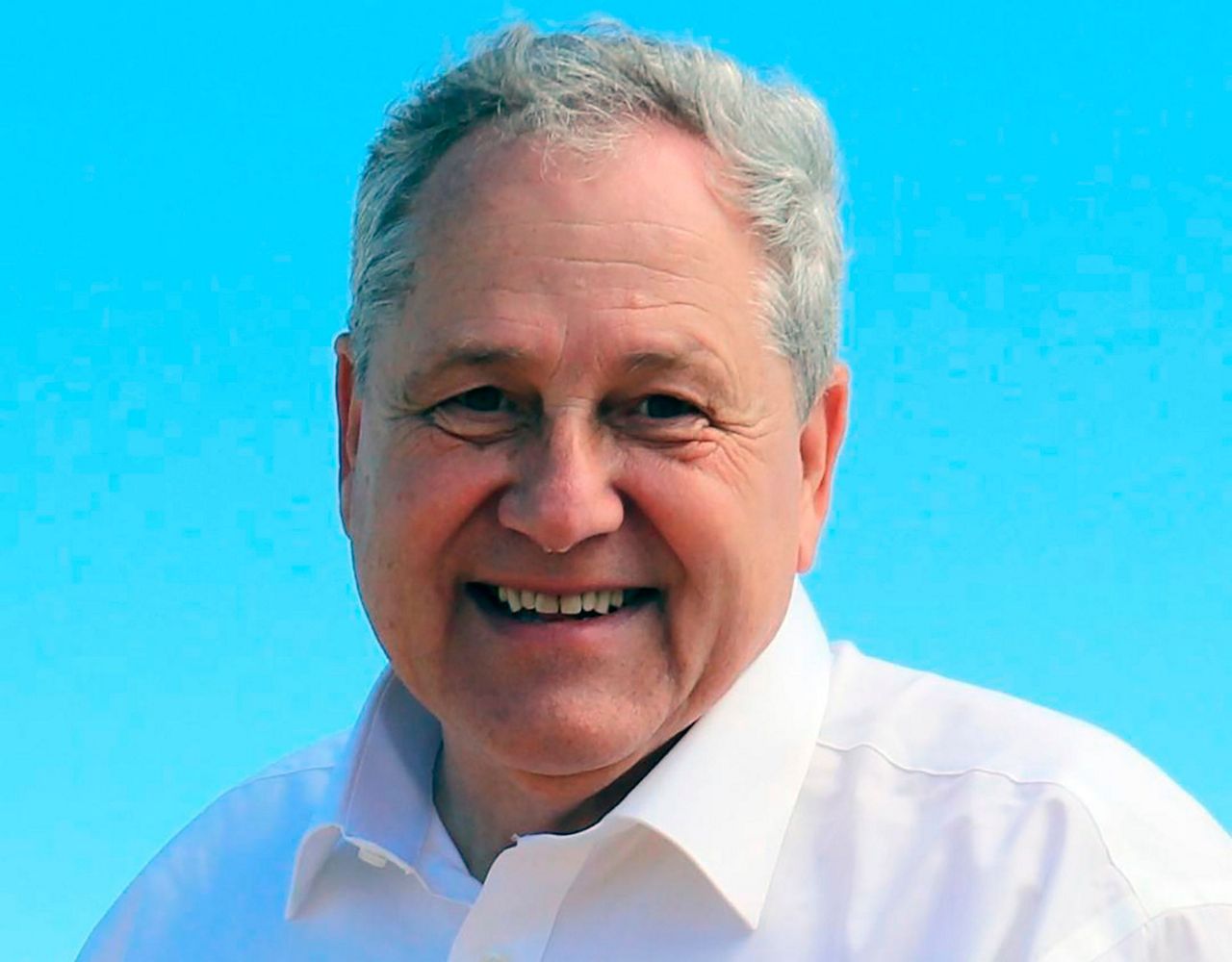 7 of 8
In a photo provided by Joel Ventresca, date and location known, Joel Ventresca poses for a photo. Ventresca is one of the Democrats running in the recall election against California Gov. Gavin Newsom. He's running on a platform that includes free health care and education for all Californians at any age. (Joel Ventresca via AP) 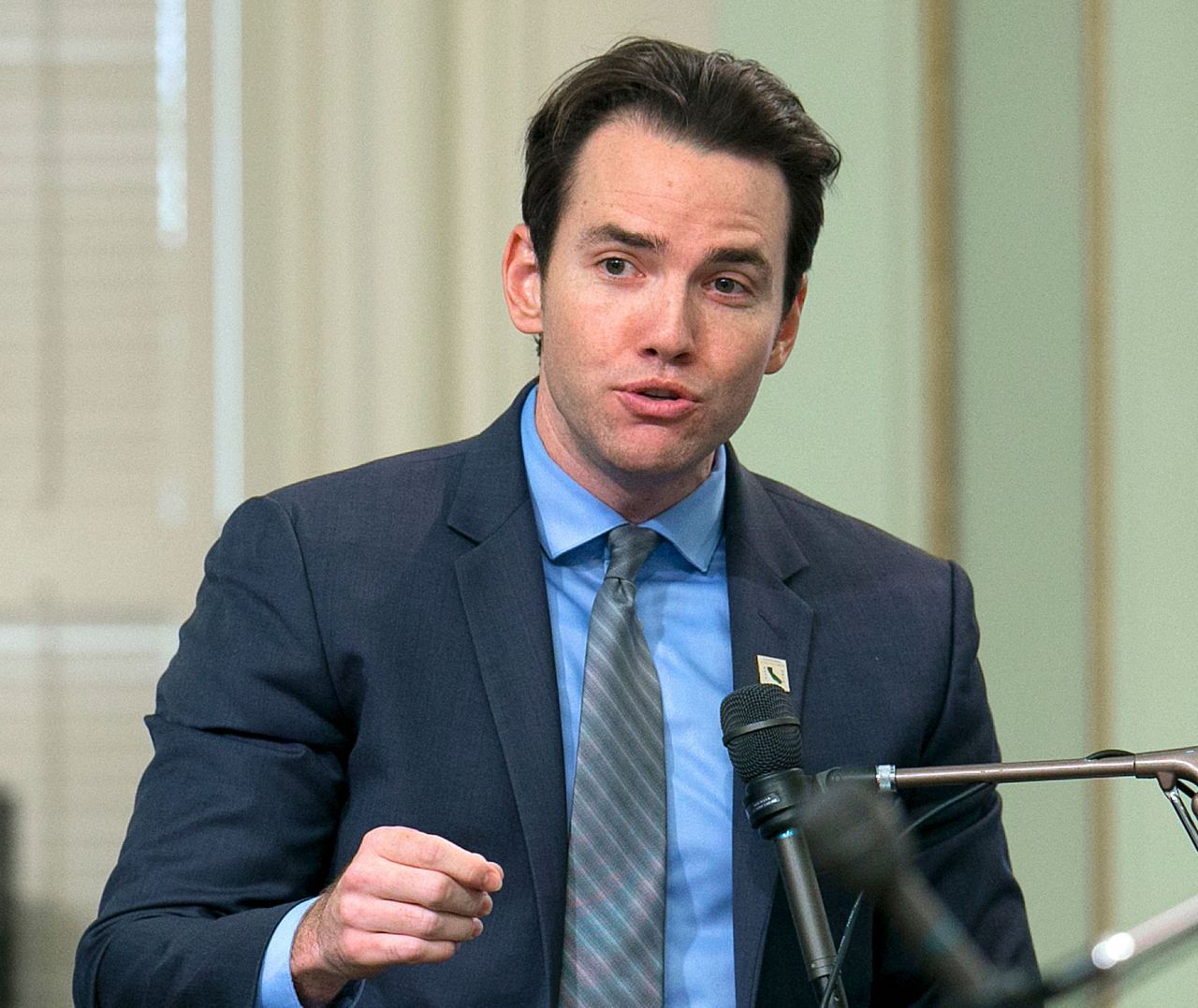 8 of 8
FILE - This Aug. 31, 2017, file photo shows Assemblyman Kevin Kiley, R-Rocklin at the Capitol in Sacramento, Calif. Kiley announced on Twitter on Tuesday, July 6, 2021, that he is running in the Sept. 14, recall election in an attempt to replace Gov. Gavin Newsom, a Democrat. (AP Photo/Rich Pedroncelli, File)

Elder's next recourse is to go to court to get on the ballot for the Sept. 14 election, which he tweeted late Sunday he may do.

Candidates are required to submit tax returns for the five most recent taxable years and pay a nearly $4,200 filing fee or submit 7,000 signatures. A letter to Elder shared late Sunday by the secretary of state's office does not detail what tax information he did not include. Several other candidates have not yet filed their 2020 tax returns so they only submitted four year's worth of returns.

“Politicians know I'm the only candidate who will beat Gavin Newsom — and that's why they don't want me on the ballot,” Elder wrote on Twitter. “They're using shenanigans that they invented to block to doors to the Governor's Office and make sure they stay in power.”

When Elder announced his candidacy July 12, he instantly became one of the most recognizable Republicans in the field given his years on talk radio and appearances on Fox News, and was viewed as a candidate who could further energize GOP voters. Though Elder is likely to excite many voters, most Republicans are unlikely to stay home if he's not on the list, said Jack Pitney, a professor of political science at Claremont McKenna College.

“I think Republicans are going to show up because they hate Newsom, not because they are particular fans of any of the replacement candidates,” Pitney said.

Among other candidates, former San Diego Mayor Kevin Faulconer's campaign was in a dispute with state officials over whether he could be listed as the city's “retired” mayor and YouTube creator Kevin Paffrath said he planned to sue to get his YouTube nickname on the ballot. Meanwhile, Caitlyn Jenner, the Olympian-turned-reality-TV-star, was reportedly in Australia filming a reality show, though she tweeted Friday she and her campaign team are “in full operation.”

The list of 41 candidates released Saturday by the state lacked the panache of the more than 100 candidates who ran in California's last recall of a governor in 2003. But it includes a range of candidates from the anonymous to the famous, including an entertainer known for putting herself on Los Angeles billboards in the 1980s and others with eye-catching names, like deputy sheriff Denver Stoner, and Nickolas Wildstar, who lists himself as a musician/entrepreneur/father.

The list includes 21 Republicans, eight Democrats, one Libertarian, nine independents and two Green Party members. Ballots will start going out next month in the mail, and the official election date is Sept. 14.

Each candidate is listed with a job title or other descriptor, but they are not allowed to use the word “former.” Faulconer's campaign requested he be listed as San Diego's “retired” mayor, which state officials are now disputing, Faulconer spokesman John Burke said. He left the office in 2020, and referencing his prior role would help boost his name identification.

Paffrath said he plans to sue after he was denied being allowed to list himself as Kevin “Meet Kevin” Paffrath on the ballot. He noted another candidate was cleared to run as Chauncey “Slim” Killens, who lists himself as a retired correctional officer.

No Democrat with political stature decided to run. Polls have shown Newsom well positioned to win. But should he lose in an upset, there would be no established Democrat among replacement candidates, potentially opening the way for a Republican to take the seat.

Voters will be sent a ballot with two questions: Should Newsom be recalled, and who should replace him. If more than half of voters say “yes” to the first question, then whoever on the list of potential replacements gets the most votes is the new governor of the nation’s most populous state. With numerous candidates and no clear front-runner, it’s possible the someone could win with less than 25% of the votes.

The push to oust Newsom is largely rooted in frustration with long-running school and business closures during the pandemic that overturned daily life for millions of Californians. But many voters aren't paying attention, and there were no new candidates who emerged Saturday who appeared to have the potential to reorder the trajectory of the race.

According to the secretary of state's office, candidates who have filed the required paperwork include:

- Paffrath, 29, who gives financial advice to his 1.7 million YouTube subscribers. The Democrat says his lack of “political baggage” is a good thing. His proposals include building underground tunnels for new roadways and cutting income taxes.

- Angelyne, the only one-name candidate running on the ballot, is an entertainer who gained fame in Los Angeles in the 1980s by buying billboard space to advertise her name and image. She's listed as “no party preference” and her platform includes an annual masquerade ball where citizens dress up like the governor, an official Bubble Bath Day, and “rehab for politicians.”

- Jeff Hewitt, 68, is a Riverside County supervisor. He wrote in The Orange County Register that he was entering the race because “this state no longer accommodates dreams, fosters ideas or solves problems.” He argues the state needs a new approach and is running as a Libertarian.

- Joel Ventresca, 69, is a Democrat though says he's further to the left than Newsom, whom he called a “corporate, establishment, insider Democrat.” Ventresca’s main campaign platform is providing free health care and education “cradle to grave” for everyone in California. He retired in 2018 from the San Francisco International Airport, where he held multiple roles.

- Sam Gallucci, 60, a Republican, is a former technology executive who is senior pastor at Embrace! Church in Oxnard, California. He also runs services that provide assistance for at-risk women and children and migrants. In his tech career, he rose through the corporate ranks to become an executive vice president and general manager for software maker PeopleSoft, which Oracle acquired for $10.3 billion in 2004.

- Caitlyn Jenner, 71, is a lifelong Republican trying to parlay her celebrity into a surprise win. She won the men's decathlon gold medal at the 1976 Olympics, married into the Kardashian family, became a reality TV star with them, and came out as transgender in 2015. She has described herself as a fiscal conservative who is liberal on social issues. But she’s proven gaffe-prone in interviews and hasn't released any significant policy proposals.

- John Cox, 66, was the Republican nominee for governor in 2018 and lost to Newsom in a landslide. This time around the multimillionaire businessman has displayed a showman’s instincts, campaigning with both a Kodiak bear and a giant ball of trash. He’s long sought public offices, including failed races for U.S. House and Senate as well as president.

- Doug Ose, 66, is a multimillionaire businessman and former Republican congressman who represented a Sacramento-area district from 1999 to 2005. Ose says he's ready to work across party lines to reopen schools and get the economy back at full strength. He calls Sacramento broken, pointing to the homeless crisis, climbing gas taxes and increasing crime rates. He briefly ran for governor in 2018.

- Jacqueline McGowan, 46, a Democrat, is a stockbroker turned advocate for cannabis policy reform. She's running to bring attention to what she calls a crisis in the legal cannabis market, which has struggled to get on its feet amid heavy regulation and taxes while facing stiff competition from the thriving underground market. She would slash pot taxes and push communities that have not set up local markets to open the door for legal sales.

- Kevin Faulconer, 54, is a Republican who was twice elected mayor of Democratic-leaning San Diego and has long been seen as a potential statewide candidate, given his centrist credentials in strongly Democratic California. He’s presented himself as a problem-solver and has touted his work keeping homeless encampments off streets while they spread unchecked in Los Angeles and San Francisco.

- Steve Chavez Lodge, 62, is a retired homicide detective and small business owner who served on local government commissions. He gained notoriety when he got engaged to reality TV personality Vicki Gunvalson, who appeared on the “Real Housewives of Orange County” for 15 years. The Republican says “California is completely broken” and is promising to “get government out of our lives ... and out of our wallets.”

- Kevin Kiley, 36, is a Republican state assemblyman from the Sacramento area who emerged as a favorite among GOP volunteers who gathered petition signatures for the recall. He built a reputation as a strong conservative and one of Newsom’s most vocal critics.