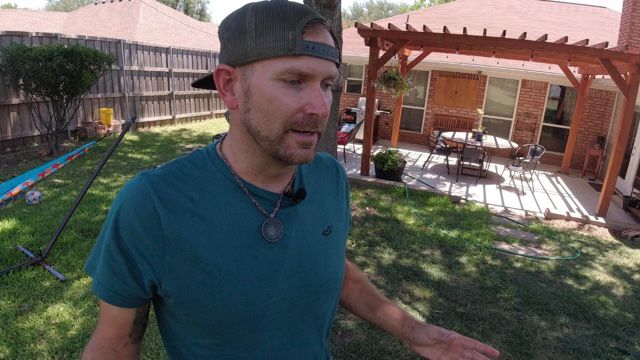 Phillip Brawley of Benbrook talks about the stroke that could have cost him his life as he lined up to run a 5K.

BENBROOK, Texas — On a day meant to honor a loved one, Phillip Brawley believes it may have been that exact loved one who was looking out for him as a hidden medical condition took him from the starting line to the emergency room.

The athletic 40-year-old from Benbrook, who lives outside of Fort Worth, experienced a life-threatening stroke only a few months ago.

“I surprise everybody,” said Brawley as he recovered in his home this month.

It was early April when it all happened. Brawley and his family were in Fort Worth for the annual Victory Over Violence 5K run; an event that they take part in every year to honor a victim of gun violence who's very close to their hearts.

In 2010, Brawley’s brother-in-law, Eric Forrester, was coming home with his sister when Brawley said they found their family’s home being invaded by armed burglars. He said Forrester, who was just 17 and still in high school, sent his sister to get help at a neighbor’s house.

“He approached them and they came down the steps and they basically executed him, shot him in the back of the head,” said Brawley.

Two teens were eventually convicted of killing Forrester. Brawley and his family have continued to take up the cause of gun violence and run for Forrester each year in that 5K.

Before the race, Brawley said people around him at the starting area asked him if he was OK. To him, everything seemed normal. He didn’t believe he was acting any differently than he normally would. However, everybody else watched as he fell deeper and deeper into a serious situation.

“I started saying weird things and not responding,” said Brawley. “My whole body was starting to curl up.”

Eventually, Brawley was down in the grass as paramedics rushed to his aid and quickly sent him to Texas Health hospital for emergency help. Doctors say it’s a good thing they moved fast because the 40-year-old was having a very serious stroke.

“His speech was garbled, he was almost completely paralyzed on the left side,” said Dr. Yinn Cher Ooi. “In his case, he actually had what we call a PFO, which is basically the medical term for basically a hole in the heart.”

Brawley had been living with a hidden medical condition. According to Texas Health, about 25% of adults have a PFO and though it doesn’t put all of those people at a higher risk for a stroke, it is often present in many strokes that don’t otherwise have an identifiable cause. It’s also, Dr. Ooi said, one of those things that people don’t really realize they have until a situation arises.

Dr. Ooi said early intervention is one of the biggest life-saving factors in a stroke, though. It's the fifth leading cause of death in the U.S., and he said being able to get help fast is absolutely key.

Brawley said he didn’t feel scared at that moment, but what scares him is the fact that he may have died without that early intervention. He didn’t even realize he was showing any symptoms of a stroke. Brawley said had he not been around all of those people at the race, he could have easily been alone when that emergency struck and things could have ended much differently.

He’s now recovering, and had surgery, correcting the danger hidden inside of him. Brawley said he can’t help but feel like Forrester was guiding him that day, making sure he was where he was when he needed other people near to save his life.

“He was watching over, or there was a reason why we were all there and it happened on this day,” said Brawley with a shrug.

The American Stroke Association urges everyone to remember the word FAST in spotting the signs of a stroke. You should watch for face drooping, arm weakness, speech difficulty, and if those things are present, it’s time to call 911.