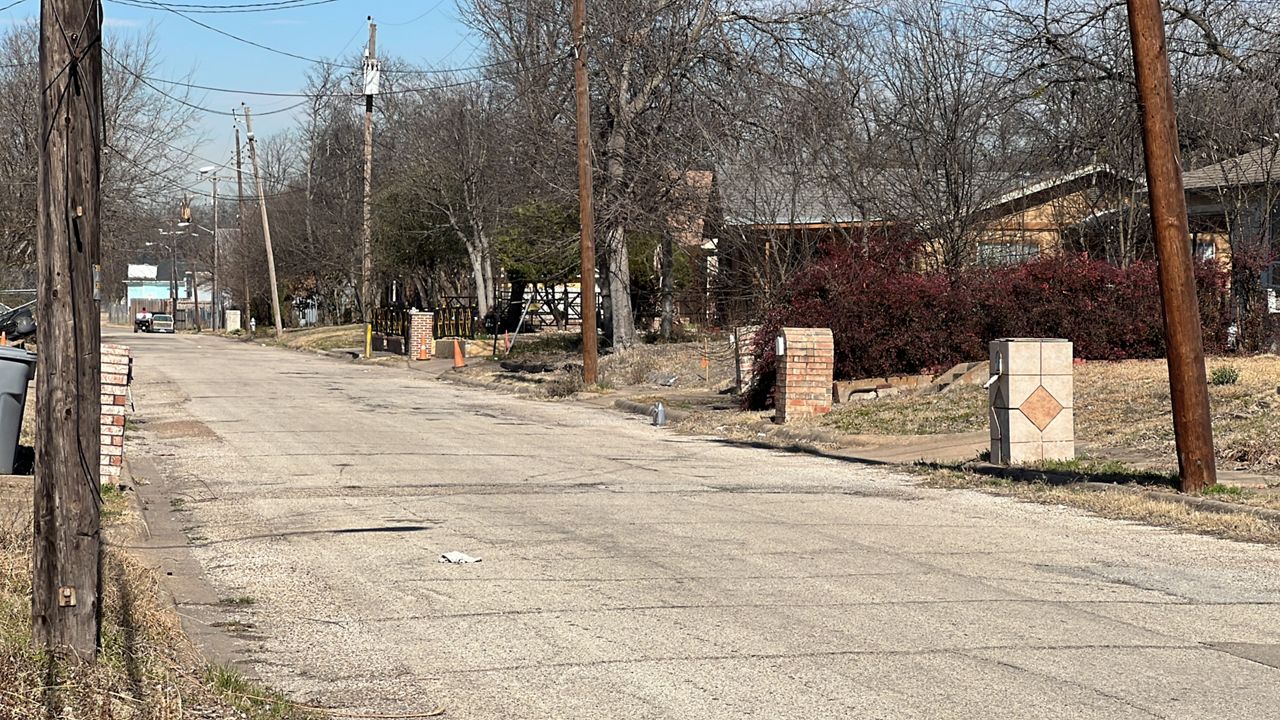 DALLAS — Students at Southern Methodist University have compiled data on nearly 800 low-, middle- and high-income Dallas neighborhoods, rating the level of infrastructure quality on things like streets and sidewalks, and labeled 62 of them as "infrastructure deserts."

Researchers did the work in a multiyear research project with over 20 undergraduates and graduate students led by SMU’s professor in the Department of Civil and Environmental Engineering, Barbara Minsker. She coined the term “infrastructure deserts.” Minsker says they define infrastructure deserts as a low-income area with poor neighborhood infrastructure. 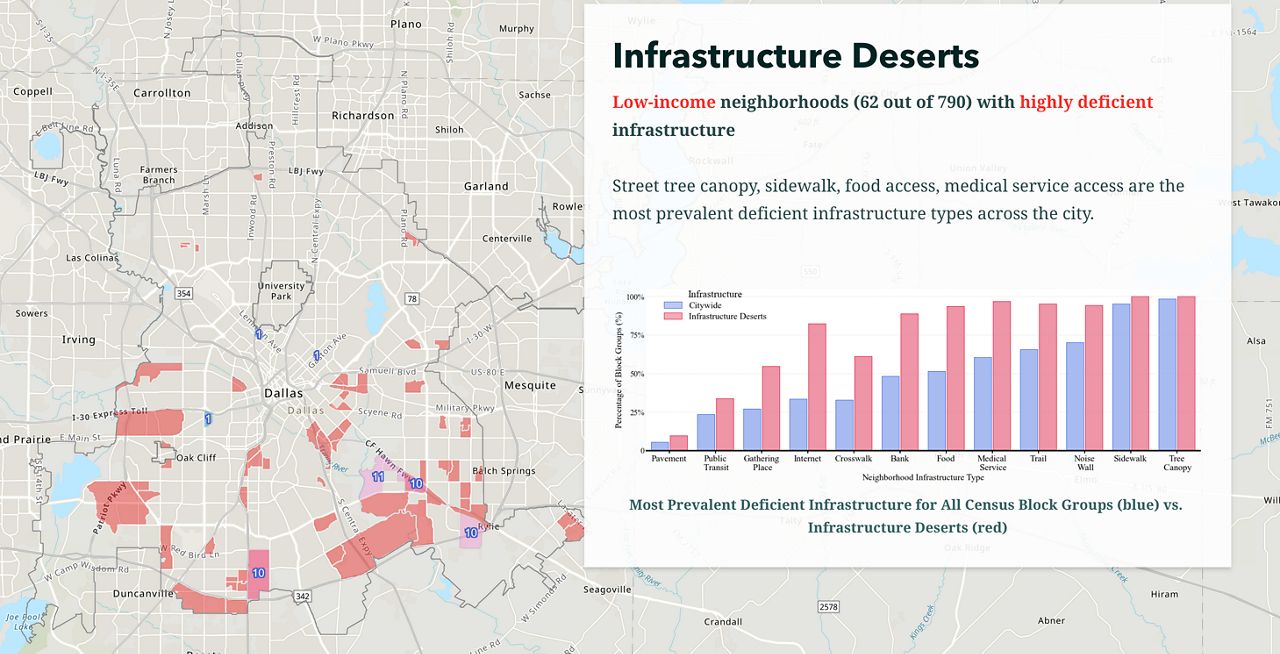 “It’s being neglected for so many years, and under-invested. And when the bonds come through where the city invests, they spread the investments across the council districts evenly, which means that we never catch up on these kinds of deficits,” Minsker said. “But the city has to be convinced to spend more of that money in these areas that have deficits and less in the more wealthy areas where their infrastructure is in great shape. And one of the things we looked at, predominantly Black neighborhoods are up to five times more likely to have bad infrastructure. And low-income neighborhoods are about up to four times more likely than wealthy neighborhoods. So that’s the kind of inequity we see.”

The group at SMU created its database by looking specifically at the condition of 12 types of neighborhood infrastructures across Dallas. They looked at the city’s pavement, noise walls, crosswalks, sidewalks, internet service, street tree canopy, as well as residents’ access to food, bike and pedestrian trails, public transportation, gathering places, medical services and banks. Next, the group identified the locations with the most extreme deficiencies of infrastructure, which is where they pinpointed these infrastructure deserts.

SMU Ph.D. student Zheng Li has been working on this data for five years now, which he and Minsker have submitted to be peer-reviewed and published.

“I just feel very, very lucky to be able to work on this project. I hope this opens up lots of possibilities for other researchers to continue to work in this area,” Li said. “Because nobody has been working on infrastructure deserts before. We are the first research group trying to understand this. And beyond that, I mean, my goal of this just involves more people to be interested in this area and make their contributions on top of this.”

According to their data, the southern part of Dallas is where most infrastructure deserts are, which is home to primarily Black and Hispanic residents. The areas labeled with 10 or 11 infrastructure deficiencies, out of 12 total the group was looking at, were located south of I-30. 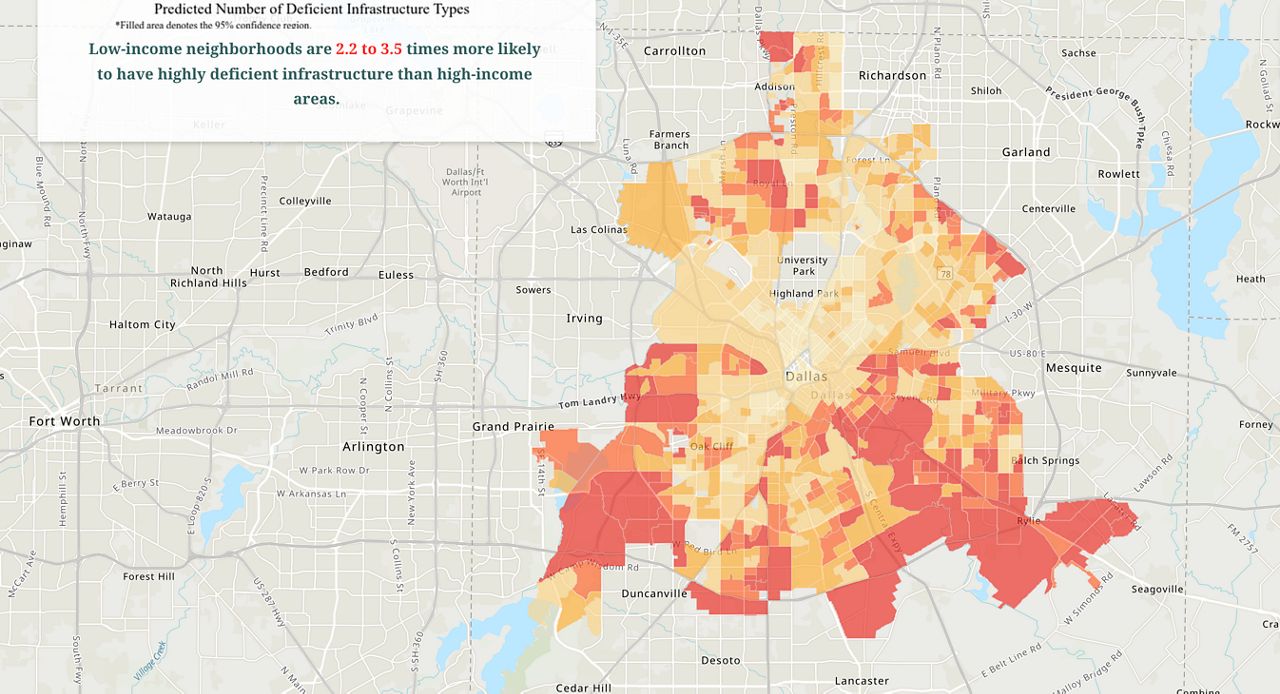 “So it’s a huge problem. If you look at the maps that we’ve created, it’s a large swath of southern Dallas, which is — Dallas is a very spread-out city — it’s miles and miles of areas that have a deficient infrastructure of all these different types. So catching up is such a huge undertaking.”

Jubilee Park, an area close to Fair Park, the home of the State Fair of Texas, was where Minsker met Spectrum News for the interview. She pointed out poorly maintained areas.

“So if you look along here, there’s no sidewalks anywhere here. You have kids living in these apartments, and they can’t safely get to the bus stop over here to schools that might be nearby. There’s no safe pathway. There’s no crosswalks over here on Haskell, which is a very busy road to be able to get to the transit that’s over there. There’s no tree coverage here in the summer,” Minsker said. “It’s all the basics that you need in a neighborhood. Things that seem pretty small but that make a difference. We compared infrastructure in four different cities. So we looked at Dallas, Chicago, New York City and LA. What we found is that Dallas had the worst infrastructure of all four, and the most inequity of all four. So we’re really behind and we got to get our act together.”

Jubilee Park and Community Center COO Mark Mullaney says some investments are being made into revitalization of the area, but they’re certainly not enough.

“We have open spaces and vacant lots, some of which have had houses that were not up to up to code and were neglected and so houses were torn down. Some of this land is in the land bank, other is privately owned. A lot of bumpy roads, lack of sidewalks, lack of coverage of trees. It doesn’t make it navigable for families for anyone that has mobility issues or a disability. [Part of] the street has been repaved by Dallas Utilities. But [the City of Dallas and I are] out here to talk about how we might be able to continue to leverage the resources, because these empty lots that you see in front of you are going to eventually contain multifamily homes as well as affordable housing for seniors. And we need to know that when those are built, [residents] have access to get out in their front yards, to walk down the street and to access other services they need as part of their everyday life.”

Mullaney said they surveyed the residents of Jubilee Park and have taken part in focus groups. Things people want are directly related to infrastructure. They’ve mentioned access to health care, and Mullaney says a community health clinic, in a partnership with Parkland Hospital and Jewish Family Services, is being constructed on the other side of that neighborhood across Haskell, the dividing main street. However, getting residents to the clinic safely is difficult due to lack of infrastructure that’s found on the other side.

“This side of the neighborhood needs to have the same infrastructure. Neighbors here have said affordable housing, better streets, sidewalks, navigability for families and people of all ages are key issue areas for them and we’re trying to make sure that we can help make that happen,” Mullaney said. “We know that our neighborhood has all the potential to be just as amazing as every other neighborhood in Dallas, but there’s inequity in the infrastructure and we know that to achieve the goals that our neighbors have, the infrastructure needs to be built up to help them access the tools that they need to thrive.”

Minsker says city leaders like Dallas Mayor Eric Johnson have already noticed this research, and she’s hoping to see it being used to create lasting change. The mayor asked for Dallas Police Chief Eddie Garcia’s “crime plan micro grids” to be an overlay on the infrastructure desert maps to see which areas have overlap and should focus on in terms of overall needs.

“I’ve been doing research for 25 years, and this is the first time that we’ve had this kind of response of interest from people out there in the world saying, 'Oh my God, yes. We’ve got to have this,'” Minsker says. “His data is actionable, and it’s helpful and literally within a week. I’ve got the mayor’s office is starting to work with our data. It really just blows my mind. And I’m so excited.”

Correction: A previous version of this story identified Barbara Minsker as the chair of the SMU Department of Civil and Environmental Engineering. This has been corrected on all platforms.