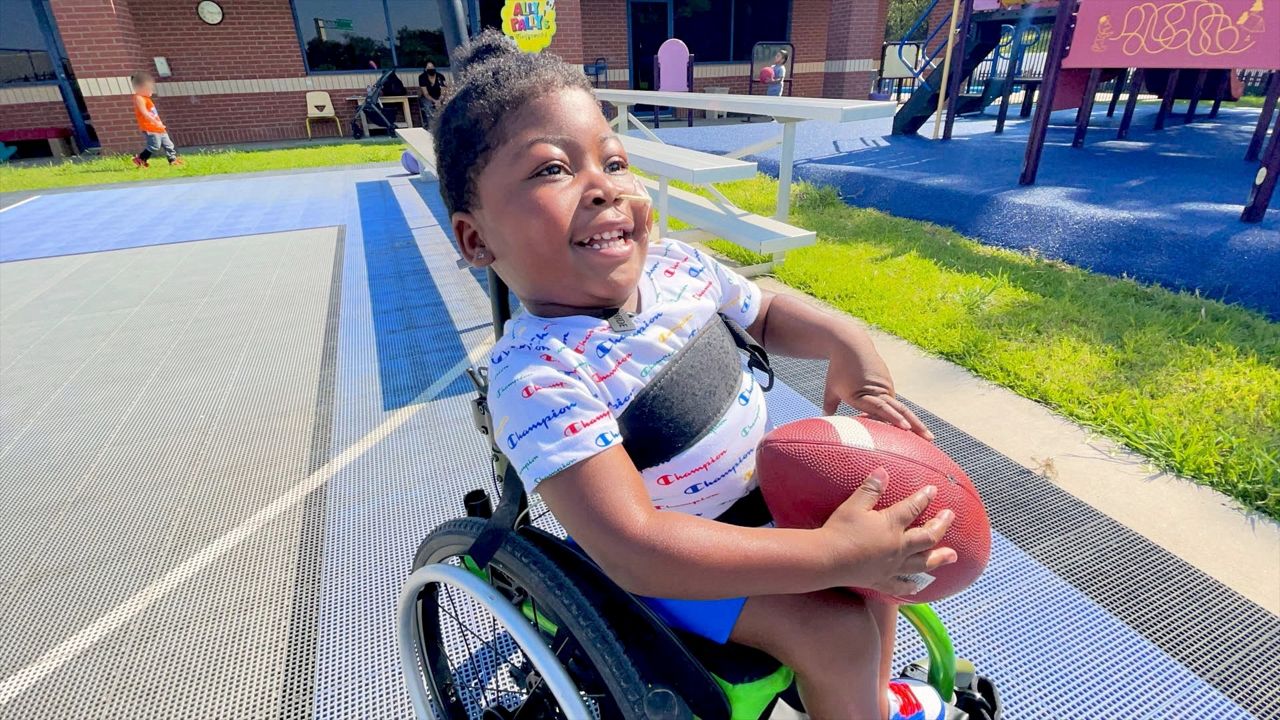 Dash Porter catches a football in his wheelchair while outside at Bryan’s House in Dallas. (Spectrum News 1/Stacy Rickard)

DALLAS — A Dallas organization is in need of funding to continue care for hundreds of medically at-risk children with special needs across North Texas. Bryan’s House is hoping to raise $30,000 to sponsor four children’s participation in the Early Childhood Education and Therapy Program at Bryan’s House for a year.

The vast majority of families at Bryan’s House live below the poverty line, so being a one stop hub for therapies, early education classes and developmental care for children is critical.

"We're very blessed here at Bryan’s House thanks to the community who fund us. You know, we only have a small portion of government funding, but the rest comes from the community. So it's vital that partners lean in a little bit and really focus on a population that sometimes gets forgotten,” said CEO Abigail Erickson-Torres.

Erickson-Torres said the amount of children coming in for therapy has increased during the pandemic, and they’re seeing higher developmental delays. The sheer number of kids needing therapy has led to waiting lists to get on-site daily care and the need for overflow therapy rooms. As of September, the facility has around 1,000 clients, both children and parents, in eight different counties around the metroplex.

"We are documenting historically higher language and speech delays and lack of socialization skills for children ages infant to 3 years. The children have had less chance to develop natural socialization and communication skills in group settings. We are adapting to meet the children where they are now to help them make sustainable gains in their development,” Erickson-Torres said. "In addition, in these first weeks of the semester we've seen acute separation anxiety in infants and toddlers — they are taking longer to settle in — especially those with multiple challenges. All of these children have been at home for much longer sustained periods of time during the pandemic."

During the pandemic, Bryan’s House called on the community to help provide emergency funding for families who lost work. And that fundraising to provide assistance to families in need hasn’t stopped.

"We were able to provide $170,000 in emergency funding for clients to maintain their residences, especially for families who lost their jobs due to COVID-19 and then have now lost them again due to the delta variant. We also asked current government partners for permission to convert committed funds unable to be utilized to funding to provide emergency assistance for the populations served under their grants,” Erickson-Torres said.

The average household income for Bryan’s House families is less than $35,000, well below the statewide average. The majority of families are typically hourly workers who don’t have the luxury of paid time off to take their children to appointments. Because the education and therapy programs are together on one campus and offered 50 weeks of the year, children who attend are getting more than 2,000 hours of early childhood education. Parents are able to continue working instead of having to skip a shift or take time off to take their child to appointments across town.

"A lot of time is lost if the children are in hospital, and their parents may lose their home, they could be a middle class family, but they're in the hospital so often that they can't keep the job and they lose their homes. And that's what we're seeing a lot,” Erickson-Torres said. "It’s not just those at risk, it's those middle class families who are really struggling, where they don't qualify for benefits through the government. But they also earn, maybe, you know, $5,000 too much, and they're not qualifying for some of those other benefits even though the treatments or whatever that may be could cost between, you know, $100,000 and $500,000. So it's a real struggle.”

Addison resident Laporsha Porter and her son Dash are being supported with money raised during the 2020 North Texas Giving Day. Dash has spina bifida, a condition that caused the spinal cord to develop abnormally in the womb. After just a year of therapy, Dash has gone from using a “Scooot” mobility rider to using a wheelchair, giving him independence like he’s never had before.

“He loves it here. It's great for his development. He loves all his teachers and his classmates and he's really just blossomed,” said Porter. "He’s always been a social butterfly, but, you know, being around the kids and even like other kids with disabilities and without, he's learned a lot about himself and about other kids as well.”

Porter says living in Addison, the price she’d have to pay for this level of care is more than she could afford, especially for one with expertise in Dash’s disability.

“Like the average cost of daycare is like two-something a week, sometimes upwards of three-something a week. And personally, I could not afford that,” Porter said. "Him having so many hospital stays and I would have to leave, there would be weeks where I didn't get paid at all. So, yes, [Bryan’s House] helps. The price that I pay is amazing for the amount of care that he gets. For the price, it makes everything worth it. That's why I’ll keep him here as long as I can possibly keep him here.”

Each child, like Dash, has a care plan and case managers to follow them on their journey. That’s something Porter says is invaluable. 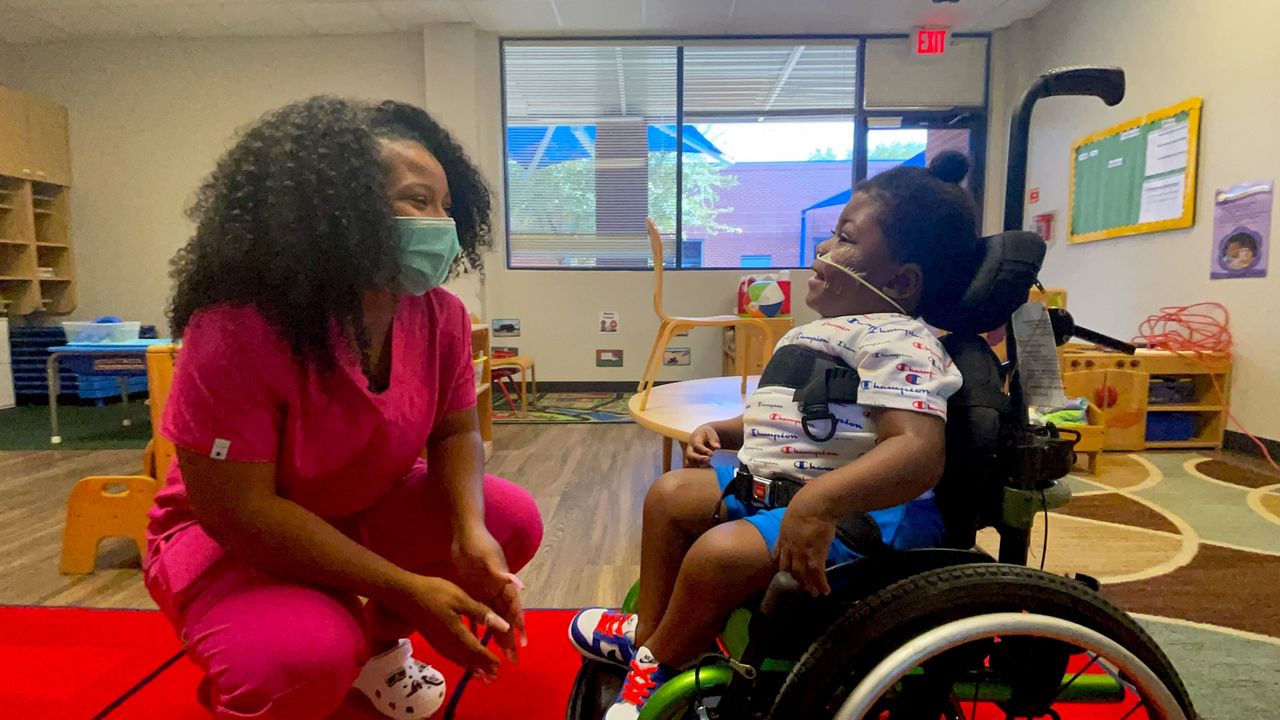 “I don't have the answers to everything, like he has speech therapy because he has feeding issues. I didn't even know like that he had a paralyzed vocal cord. And now that we know, they help him to overcome that before he has to have surgery and everything,” Porter said. "As a mom, you want to do everything, but sometimes it's impossible to be everywhere at every waking moment. I have to work because I have to keep a roof over our head. So some things I can't do with him that I wish I could, but I just can't at the moment. And having those therapies to fall back on — because I know, ‘Okay, if I can't be there to help him do this, this and that, I know that he has a physical therapist, occupational therapist, speech therapists.’ He has people to help them.”

Erickson-Torres says child therapies is just a third of what Bryan’s House does to help families. They also provide basic needs like food, clothing and shelter and crisis intervention. Bryan’s House Family Support Services is helping to prevent homelessness for families of children with special needs. "Thanks to Bryan’s House, these families can hold down jobs, support one another, receive critical counseling and education, and create safe, fulfilling households where their children can thrive,” the facility’s website reads.