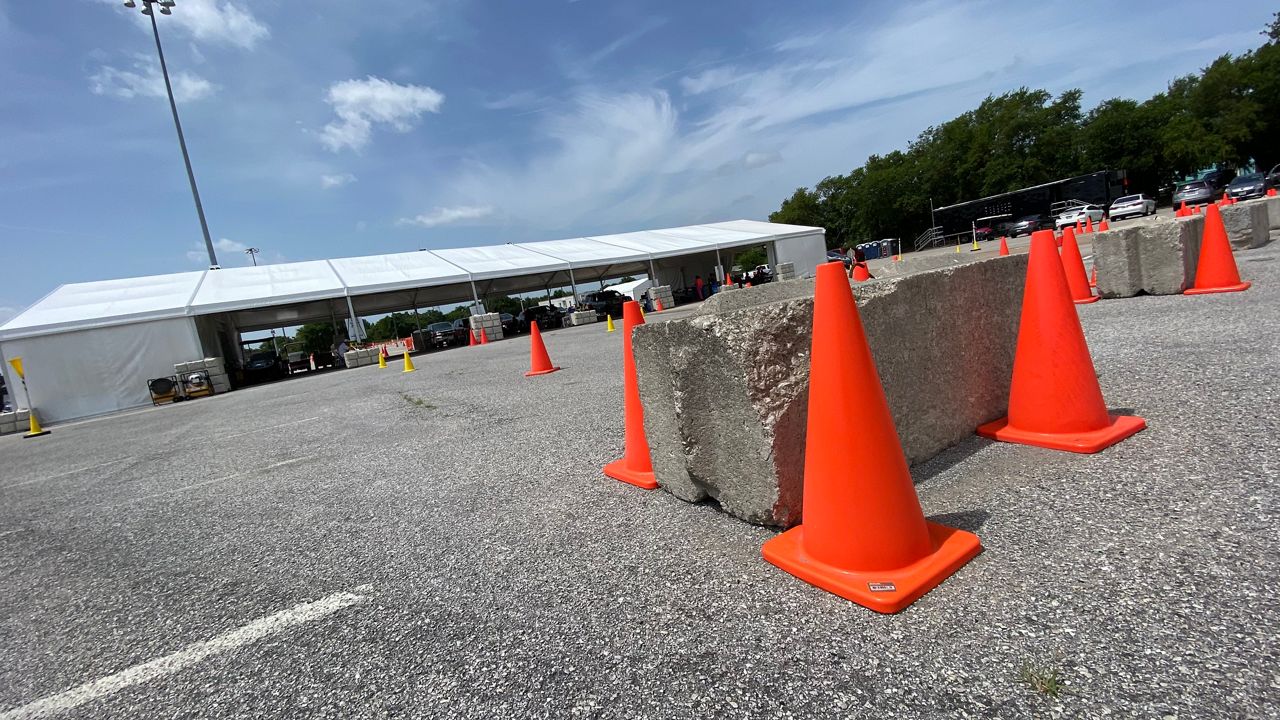 Some of the final vaccine recipients go through the lines at Dallas's Fair Park Mass Vaccine Clinic, before the site closes for good. (Spectrum News 1/Brian Scott)

DALLAS — The end of one major tool in the fight against COVID-19 signals the beginning of a new strategy in Dallas County.

On Saturday, the final cars went through the lines at the Fair Park mass vaccine clinic in east Dallas. Leaders with Dallas County Health and Human Services said the site served as the location for about half a million people to get their COVID-19 vaccine — the most for any single location in the southern U.S.

Long-time volunteers at the site, like Brad Dow, recalled how workers went from distributing about 6,000 shots per week when the site first opened in January to as many as 12,000 a day when FEMA and the U.S. Army joined forces with their team.

“If you can imagine, when we first opened, this entire parking lot all the way out to the field adjacent to here was full of cars and it was like that for eight hours a day,” said Dow pointing across the large open parking lot on the State Fairgrounds.

At its height, the clinic had 18 lanes of cars going through the lines all day as people from all over came to get the shot.

By the end, the once packed site was down to just six lanes, each with just a few cars pulling through.

Dow and the other four remaining volunteers on the final day continued to keep vaccine recipients company following their shots, just as they had done there for months, making sure every last person got the same care at the site as the people who came on day one.

“It’s kind of bittersweet, it’s kind of sad,” said Dow looking back on his time there. “It’s been very rewarding and it’s been great to see all of these people get vaccinated. I just wish that we still had the lines we were having because we still have a ways to go.”

That was the real kicker for many at the site on that final day, and the problem that health leaders in the county and across the country are still trying to combat.

On Monday, Dallas County Judge Clay Jenkins tweeted that more than 400 new COVID cases in the county and one new death were reported that day. The judge said Tuesday that it marked the highest case-count day in the fight against the virus since early March.

Dallas County is actually fairing better than many others, announcing this month that they have reached herd immunity by the numbers.

However, no community is in a bubble when it comes to this global pandemic. The case counts across Texas and the country have again risen significantly in the last 30 days, according to the latest health department and Centers for Disease Control stats.

Health leaders in Dallas County are trying to find ways to reach the people that are still holding off on getting the vaccine. The mass vaccine site wasn’t drawing them in anymore.

With the closure, Dallas County Health leaders say they’re shifting their vaccination focus to pop-up clinics in the community and smaller vaccination efforts more targeted to specific zip codes where vaccination rates are lagging behind. One of the first of those efforts is a clinic in the Oak Cliff neighborhood, but leaders say it won’t be the last.

With the highly contagious delta variant of COVID-19 becoming more and more prevalent, county leaders hope this new plan of attack will continue to boost the collective protection against the illness in, what health officials say is the most effective way out there: getting people vaccinated.

Those who still need to get the vaccine and are looking for a place to do so can find shots in their area at vaccines.gov.