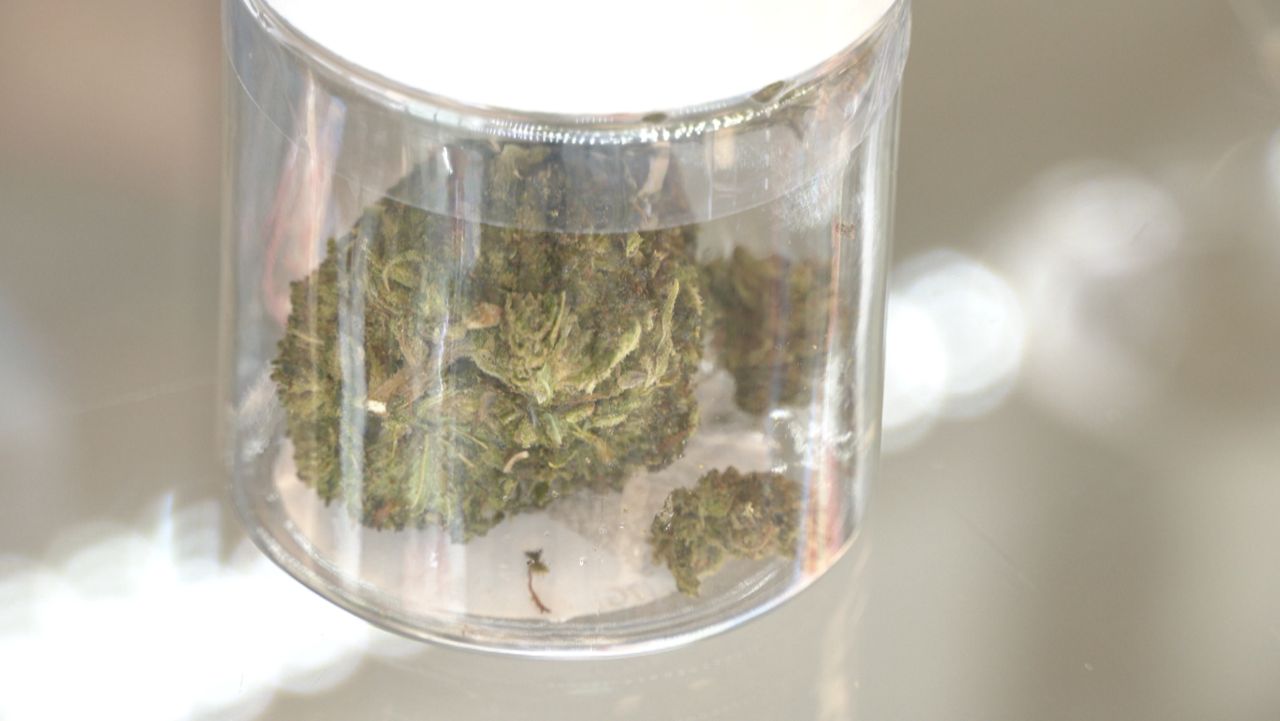 What is Delta 8 and is it legal in Texas?

PLANO, Texas — For several years now, John Fisher and his son have dedicated their business to a product that changed their personal lives, CBD.

“It’s absolutely changed my quality of life,” said Fisher, who's experienced ongoing neck and back pain from a life-time of injuries. “I can play golf again without having all this hurt and this pain. I can swing the golf club again, and things like that.”

Fisher said he first became interested in CBD and cannabinoid-based medical alternatives after losing a loved one to prescription opioids, and wanted to find a better way to manage pain. That path eventually led Fisher and his son to open up their own CBD store called CBD Pros, for which they now have 21 locations and a large menu of products backed up by extensive lab and manufacturing quality results.

In the last year or so though, it’s another product that’s started taking over their shelves and grabbing the attention of more and more of their customers: Delta 8.

Fisher pulled from a shelf, behind the counter in his Plano store, several jars of Delta 8 flour, gummies, and droppers of tincture. He said at this point, Delta 8 products make up about half of his sales.

In fact, drive by almost any smoke shop or hemp retailer in Texas right now and you’ll likely see Delta 8 listed on the front window or being sold inside. The products are all the rage, but what is so special about Delta 8? Many unfamiliar with the product may glance at a jar of Delta 8 flour and mistake it for marijuana, but that’s illegal in Texas and at the federal level.

Delta 8 is very legal for now. A lot of its popularity may be because of how it compares to marijuana.

Delta 8 is a form of tetrahydrocannabinol (THC), according to Leafly, and yes: THC is the compound that gives marijuana its intoxicating psychoactive effects, the part that gets you high. However the THC in regular marijuana is Delta 9 THC. Just few have ever referred to it as Delta 9 in the past until Delta 8 started gaining popularity.

The difference in Delta 8 is that it occurs naturally in hemp — the variety of cannabis plant used to make CBD products that contains only trace amounts of THC. Fisher said Delta 8’s presence in hemp has been known for a long time, but the amount of it in the plant is small.

According to Leafly, the 2018 Farm Bill allowed hemp to be legally grown and worked with across the United States. As a result, cannabis experts started extracting Delta 8 from CBD and synthesizing it into its own product, a process that Leafly says is expensive but it’s in high demand.

Federal and most state’s laws have made anything with a high concentration of Delta 9 THC illegal for recreational use and even a lot of medical use. Those rules vary state by state, but Delta 8 falls into a sort of gray area and is being sold in most states, including Texas, as a legal THC.

So, the million dollar question: does it get you high like Delta 9 THC.

“It has been shown to be inebriating,” said Morgan Fox, Media Relations Director for the National Cannabis Industry Association.

Most experts are describing Delta 8 as a weaker form of THC than Delta 9, but depending on the tolerance of the person taking it, the size of the dose, and their overall body composition: they say they can still experience a high.

Fisher said he personally, in his use of Delta 8 products, has not experienced a high. He said many of the people coming into his store are not seeking it out for that kind of use at all; they’re looking for the medicinal benefits of THC like stress relief, sleep assistance, or an increase in appetite.

“You just get a relaxing feeling. You just have a feeling come over your body of just pure relaxation,” said Fisher. “You’ve got all kinds of different ailments out there that these products can very well help you.”

He said he’s getting customers from all walks of life, and Fox said it’s clear by the demand for Delta 8 products right now that people are looking for a legal path to legally purchase THC, whether for medicinal or recreational purposes.

However, Delta 8 is not universally loved by experts and lawmakers.

Currently, the Texas Legislature is nearing the end of their 2021 session and still working through several bills aiming to do things like expand research into the medicinal properties of psychedelics, expand the THC levels allowed in compassionate use of medical cannabis and decriminalize marijuana possession. Each of those bills remain in different stages with the deadline looming, but at least one took on an added amendment during debate to add laws in the state concerning the levels of Delta 8 THC allowed in products as well as Delta 9, and effectively put an end to much of the Delta 8 on the market in the state.

That prospect is receiving heavy push-backs from advocates and retailers who would likely lose business if the product was pulled from shelves.

Fox said the National Cannabis Industry Association agrees with treating Delta 8 the same way Delta 9 is treated state-by-state, for now. He says the reason isn’t to do away with the products though, rather to see them done right.

At this point the Delta 8 market is fairly unregulated and unchecked, Fox said.

Fisher’s Delta 8 products carry QR codes, like all of the rest of his products, that lead to extensive scientific and manufacturing info about each one. He said they pride themselves on only offering high quality products that meet high safety standards and only go to those aged 21 and up.

Fox fears that’s not the case with all shops and manufacturers out there right now selling and making Delta 8 though. He said without regulatory rules for cannabis in each state, customers can’t be assured of what they’re getting.

However he said simply banning Delta 8 altogether will likely only lead to another grey area.

“People are looking for a product that does relatively what cannabis does but falls within a legal gray area,” said Fox.

He said it should be even more motivation for lawmakers in states like Texas to stop trying to shut down cannabis and instead take steps to regulate it and see that it’s being done safely in their state.

“So that it’s produced in a regulated and tightly controlled fashion, there’s lab tests being done on it, consumers know exactly what they’re getting,” said Fox.

Fisher said he believes many of his customers also want to see a regulated cannabis market in Texas so that people can continue to unlock the health relief he has from these products: whether the right ones for them are CBD, delta 9 THC, or even the lighter delta 8 which he believes many would continue to prefer.

“This has great medicinal benefits for a lot of people and a lot of different conditions,” he said.

With a little less than a week of the legislative session left, delta 8 remains legal in Texas, for now, and likely federally legal until the next debates on the farm bill in 2022.

CORRECTION: A previous version of this story had the line "That prospect is receiving heavy kick-backs from advocates and retailers who would likely lose business…" It was incorrect and we have made the proper changes.