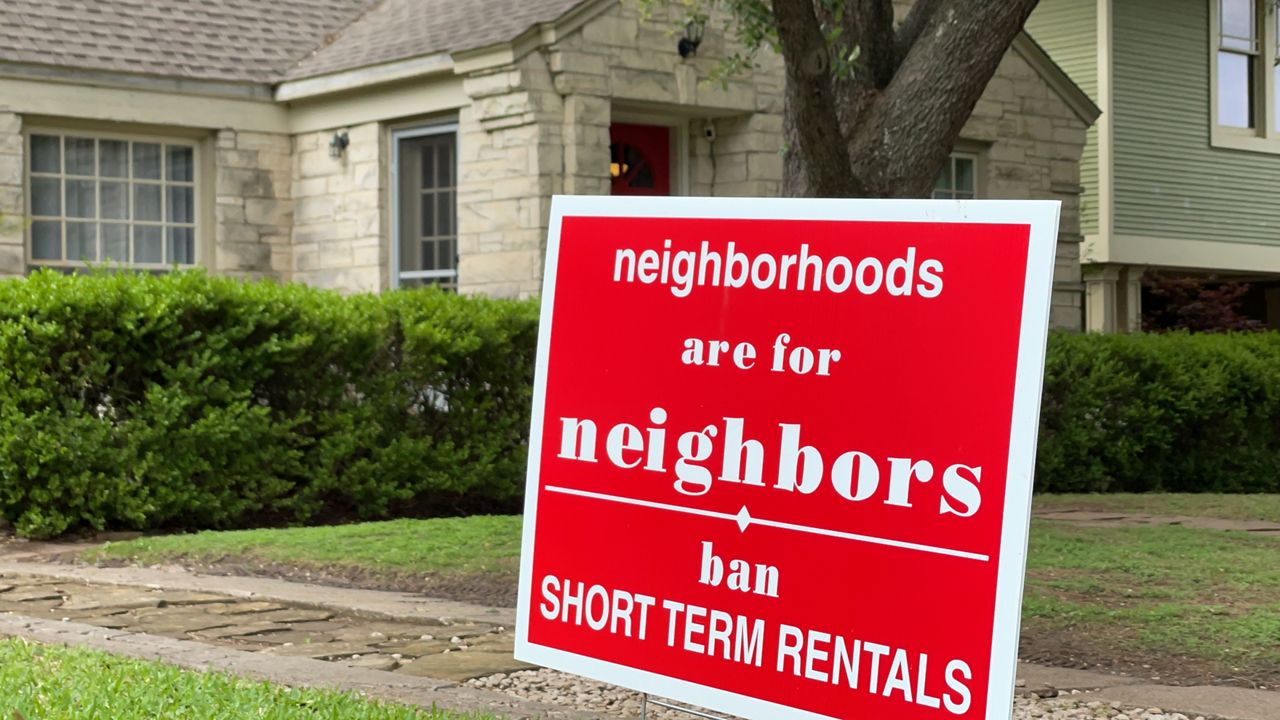 A sign next door to an STR off of Prospect Ave in Dallas. (Spectrum News 1/Stacy Rickard)

DALLAS — The City of Dallas is trying to figure out how to regulate short-term rental properties (STRs), listed on sites like Airbnb and Vrbo, in order to mitigate quality of life impacts to neighborhoods in Dallas. On May 17 members of the Quality of Life Committee directed staff to use STR task force recommendations from a January meeting to begin the process of crafting an ordinance.

According to Dallas city data from a memorandum on May 3, there were an estimated 2,229 short-term rental properties as of March 10, and just 756 of those were active and registered. The remaining 1,473 are “possible” STRs (not registered with the city or paying the required Hotel Occupancy Taxes) identified by MUNIRevs, a vendor the city employs to find and register STR properties.

That memorandum also reported in a white paper that STRs “have a limited measurable impact on neighboring communities” and “there is no evidence in the data that STRs have a city-wide impact.”

"Our findings indicate that short term rental properties, at the aggregate level, do not have a negative impact on the surrounding neighborhoods,” the white paper reported. "The data shows that there are a few problematic properties; these are outliers. STR properties are almost indiscernible in the data from non-STR residential properties."

Despite this report, it’s clear many community members disagree with the findings and are against having STRs operating in residential areas.

Norma Minnis lives in District 14, the area with the largest number of active and possible STRs in the city. She lives on Prospect Avenue, about a mile from the Lower Greenville Entertainment District and just three doors down from an STR property she says is a “constant source of havoc” in her neighborhood. 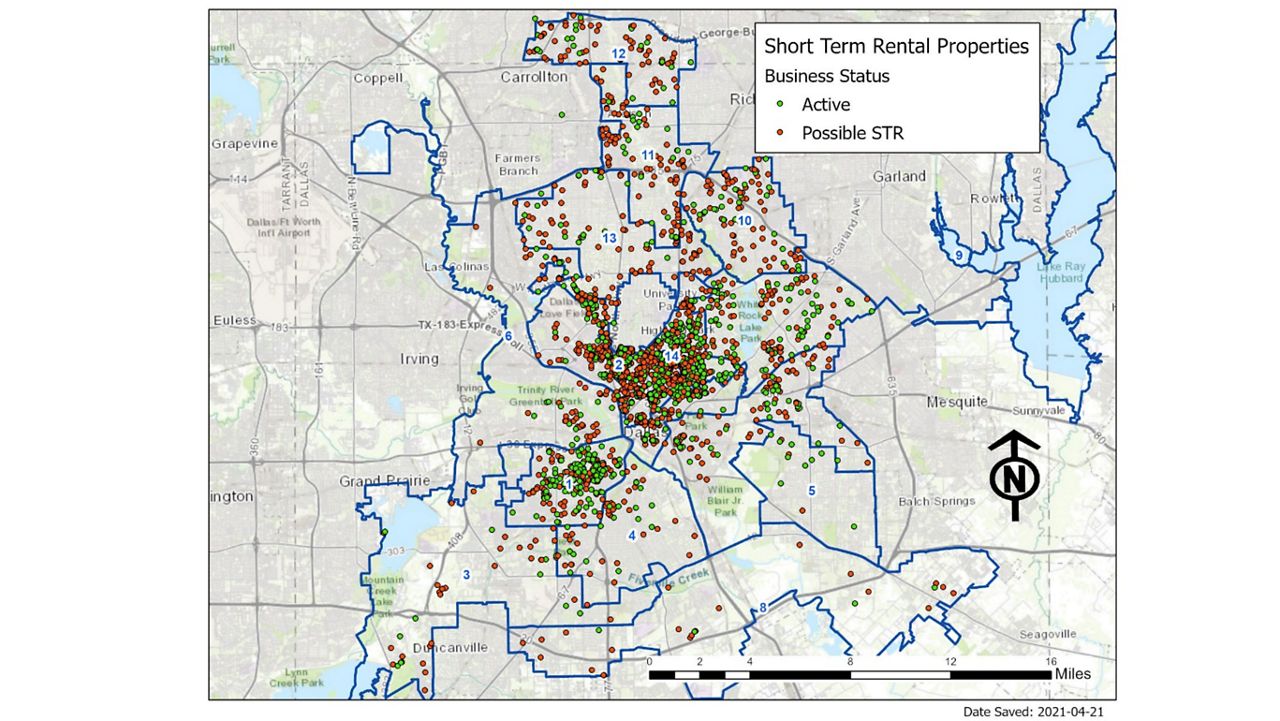 A map of the active and possible STRs in Dallas. (Photo Courtesy: City of Dallas)

"I don't want to live next door to a hotel, and neither does anybody else in this neighborhood,” Minnis said. "You can't take a casserole dish next door to welcome somebody to the neighborhood if they're only going to be there for 24 or 48 hours."

Driving down Prospect Ave., you can find many red and white signs that read “Homes not Hotels,” and “Neighborhoods are for Neighbors: Ban short term rentals,” with the website to Texas Neighborhood Coalition. However, Minnis said she and her neighbors aren’t looking for Dallas City Council to implement an outright ban on STRs, but rather keeping them out of single-family zoned neighborhoods.

"I've been with what's known as an urban pioneer from 40 years ago when young people, people in their 30s, moved into these older neighborhoods, only to learn that they weren't living in a single family zoning neighborhood and the city had changed the zoning to multifamily. There had been a prevalence of boarding houses, so prevalent that the city just finally changed the zoning to match the land use. It took 30 years for the so-called urban pioneers to return these neighborhoods to single family,” Minnis said. "I am very concerned about that happening. And people move if they're next door to a use that they just cannot tolerate. It is the use of the land that is the real issue here. Are we going to use our land for single family homes, or are we going to decide to use them for something else?”

But Airbnb owner Amy Davis said that’s an unfounded fear. She owns the STR property on Prospect Ave. a few homes down from Minnis.

“You know, I don't think anyone who owns an Airbnb wants to see the character of the neighborhood changed. People are choosing their property because of its location in a sweet neighborhood,” Davis said. "The City of Dallas has done a census of the number of Airbnbs. They’ve scoured all of these various apps and short-term rental websites, if you will, to make sure they've identified all properties that are being used as an Airbnb, whether it's a guest house or a room in the house or the entire property, they've identified that. They just haven't found the number of Airbnb or short-term rentals that the neighbors who are against this are reporting."

Minnis is one of those neighbors rejecting the data from the city, saying there are approximately 5,000 STRs in the city. Inside Airbnb, a website that lets anyone “explore how Airbnb is really being used” in a city estimates that in Dallas, there are 4,118 listings as of mid-May 2021.

"In December of 2016, there were only 900 in the city. The platforms refuse to give the addresses to the city, so you don't really know where they are. It's a catch me if you can kind of episode, which means they're not paying their taxes. You don't know where they are. Some of them even have their homestead exemption. So, I mean my tax dollars are — my enormous property taxes — are supporting their businesses,” Minnis said.

Davis said while she can’t speak for other property owners, she vets her guests and ensures they’re good neighbors and she pays her taxes to the city. She said while she’s sure there are some bad apples in Dallas, "for the most part, everybody’s incentives are in line.”

"No Airbnb owner wants someone to come in and be disrespectful of the neighborhood or trash their houses. That's not good for business. Nobody wants that and nobody benefits from that. So I think for the most part, the people who own short-term properties are incentivized to very carefully choose the guests that come to their homes, and then to make sure that those guests are respectful of the property and the neighbors,” Davis said.

As a full-time lawyer, Davis said when it comes to city oversight, it should be just enough to ensure everyone is protected. She said if the city were to ban STRs completely, she would be devastated financially and emotionally.

“You have to be careful in the regulation, you can't take away a property owner's right to use their property retrospectively, I think all of us would agree with that. None of us want the government to come in and take away our property rights, and they can't do that unless they're willing to compensate us for that,” Davis said. "So, number one, what they do has to be mindful of property owners' rights. But number two, as an Airbnb owner, I invite and welcome regulation that ensures Airbnb owners are good neighbors and that their guests are going to be good neighbors. But I don't think it should go beyond that. I think it should be just enough to make sure that everybody is being protected: the guests, the owners and the neighbors."

Minnis said Dallas should take notes from the City of Arlington, which banned STRs throughout most of the city and only allowed them in the immediate area closest to Six Flags Over Texas and Hurricane Harbor Arlington, Globe Life Park and AT&T Stadium.

“That ordinance still stands and is being enforced. And I think that that is something that here in Dallas, we could look at. We don't have an entertainment district but we do have other areas that are zoned where these could operate,” Minnis said.

What type of oversight Dallas should or should not have over these STRs is a hot-button issue, with neighbors and property owners at odds.

An online web survey was initiated from April 16 through May 5, 2021, and received 534 responses The options for STR regulations the city is considering include: