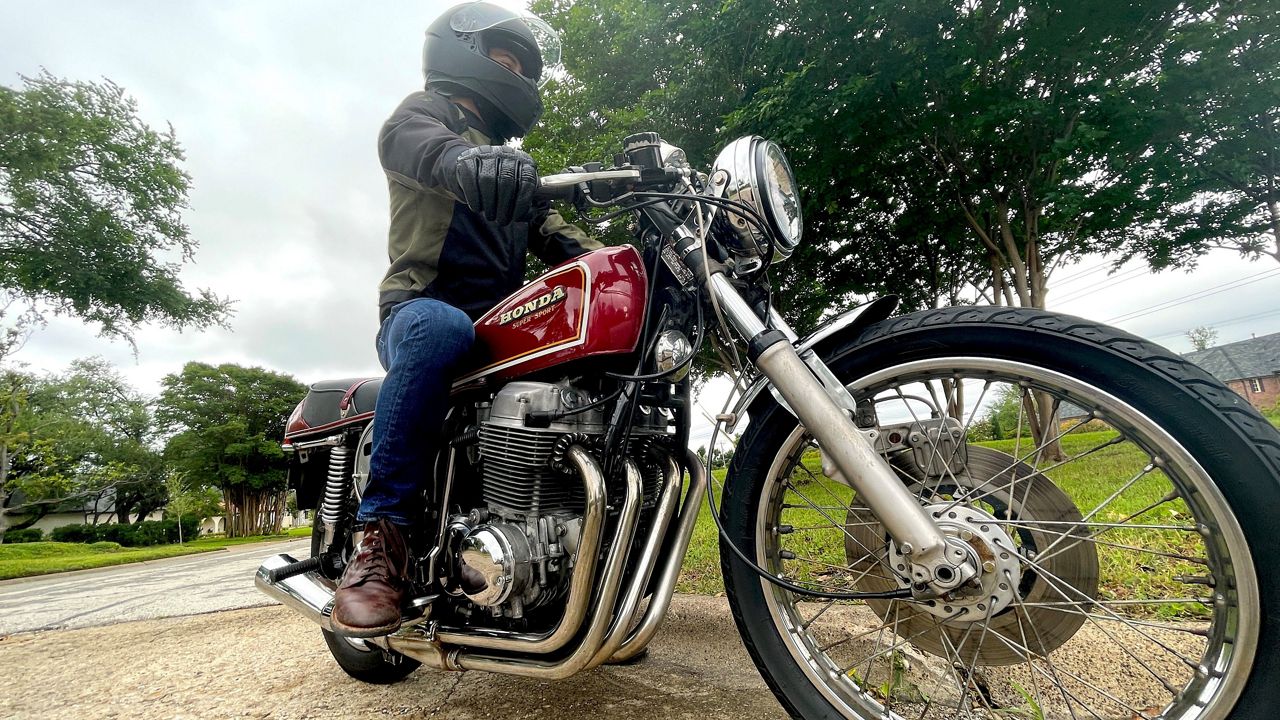 DALLAS — Despite less traffic on the road in 2020 and a 2% reduction in motorcycle crashes, safety officials are alarmed by a 17% increase in Texas motorcycle fatalities compared to 2019.

On average, a motorcyclist is killed in a crash on Texas roads every day and motorcyclists account for 12% of all traffic fatalities statewide. In 2020, in the 7,481 motorcycle crashes in Texas, 1,856 motorcyclists were seriously injured and 482 were killed.

“May through October is an especially dangerous period for motorcyclists in Texas,” TxDOT Executive Director James Bass said. “Of all the motorcyclist deaths in Texas during 2020, more than 61% happened in that period. It’s so important to remember that these motorcyclists don’t have the same protections that drivers in vehicles have, and that’s why we’re urging all motorists to stay watchful and alert when traveling alongside motorcycles so everyone can reach their destination safely.”

"When you're in your vehicle, you're surrounded, like me, by tons of steel and have plenty of safety equipment like a safety belt that can protect you during the crash. However, motorcyclists don't have that protection,” Washko said. "You know, what you might consider as a minor crash at a 20-30 mile an hour collision or so called “fender bender” can seriously injure or kill motorcyclists."

Washko said in his 23 years of crash investigations, the majority of motorcycle crashes were due to the vehicles failing to yield right of way to the motorcyclists at intersections.

“They have the disadvantage of being a smaller vehicle. So just remember to look twice for motorcycles, give them that out, and just drive safely. It's easy to misjudge them, they have less protection surrounding them when involved in the crash,” Washko said. "It comes down to visibility. Motorcycles are naturally more difficult to see, and just make sure you look twice, especially when changing lanes or pulling into an intersection."

The Texas Transportation Institute reports last year almost one-third of Texas motorcycle fatalities occurred in an intersection or were intersection-related. TTI also points to driver inattention as a contributing factor to motorcycle crashes. Registered nurse Michael Perry with HALO Flight said not only is he a first responder, he’s a lifelong motorcycle enthusiast, and unfortunately, one fatal wreck he witnessed is still vivid in his mind.

“One thing that I’ll never forget is while getting gas in the Texas Hill Country on my own motorcycle, I heard a huge crash,” Perry said. "I looked down the road to see a dump truck had entered into an intersection without completely stopping. Unfortunately, two motorcycles, one ridden by a man, one ridden by his wife and carrying their minor child collided with this truck.”

Motorcycle rider and coach Cathy Brooks knows all too well the pain of losing someone to a motorcycle crash.

“[My husband] texted me and said 'I'm leaving work, I'll see you in a minute.' And I never saw him again. He left work to come home on his motorcycle and a one ton pickup truck turned left and it was a fatal collision. He never saw the motorcycle. He never saw my husband,” Brooks said. "That day I had to figure out how to tell my four children they'd never see their dad again.”

Brooks said despite losing her husband to a fatal crash, she still rides, her parents still ride, and her kids all still ride.

“It's in our blood, we love it. We really need the motorists out there, the car drivers or truck drivers, look for us. If you don't look for us, if you don't consciously think to look for us, you'll never see us. Please look for us, check your blind spots. Double check before you turn left, make sure that that gap is really open, that there's not a motorcycle coming,” Brooks said. "We’re traveling faster than we look, we're so small. You don't see us, we don't look like we're going that fast, sometimes we blend into the headlights of other cars or trucks. We do all we can moving around within our lane so you see us, but we need you to look for us too."

Dallas motorcyclist Josh Rogers has been riding for a few years now and says when he gets on his bike, he’s trusting the drivers around him will be driving carefully. But Rogers knows motorcyclists are nearly 30% more likely to die in a crash than passenger vehicle occupants.

Even though TxDOT is reporting a 2% reduction in motorcycle crashes overall in Texas in 2020, Rogers said the sharp increase of motorcyclist deaths is disheartening.

"Hearing that the stats are up as far as motorcycle fatalities does make me sad,” Rogers said. "That could be attributed to more motorcyclists on the road, that could be attributed to drivers being on their phone and more distracted than ever. Whatever the reason is, it makes me genuinely sad. If I were to give recommendations to new riders is keep your head on a swivel, pay attention to what the drivers are doing around you and ultimately, assume that they can't see you. A suggestion to people riding in cars: look twice for motorcycles. There’s a life on that motorcycle."

Rogers said he doesn’t want anyone looking to ride to be discouraged by these new numbers. Take the required safety course, get yourself a bike, and hit the road.

“There's an incredible community of motorcyclists around Dallas and Austin and around Texas. I think in 2020, a lot of people picked it up because they were looking for something to do. They were bored in the house and this is a solo sport. So you're able to go out, you're not spreading COVID around, and you're really able to go really enjoy the windy roads in the Hill Country,” Rogers said. "It’s a good hobby to have, it's a lot of fun. There's a lot of really good rides out here. I think it's just something a lot of people could get into.”

TxDOT has these safety tips for drivers to protect motorcyclists and prevent crashes: