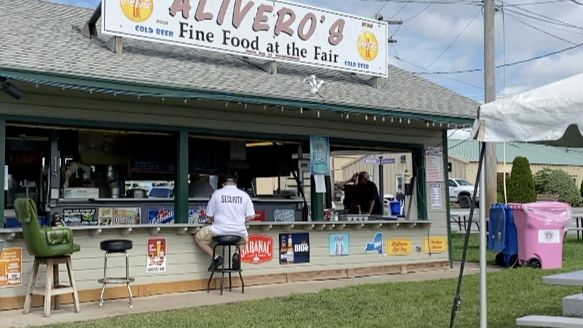 Initial attendance numbers at the New York State Fair are coming in lower this year.

The first 18-day fair has been bringing in about half as many people as usual. Some people speculate that the delta variant and the longer fair may be contributing to bringing attendance down.

Alivero’s has always stood somewhat alone on the far west end of the Fairgrounds, but this year has felt especially isolating, its owner said.

Bova has operated the stand for 25 years. She says she usually sees a lot of business from the Future Farmers of America tent and people that pass on their way to the Youth Building and 4-H shows.

Only this year, those nearby attractions aren’t there.

“We are far down and there is a lot of space that could be utilized, but I do think there is a lot that didn’t come back, obviously,” Bova said. “So the space is even bigger between me and the person down the road from me.”

Additionally, the Fairgrounds is opening two hours later this year, which has taken away business that Alivero’s used to see during breakfast time.

“I love being here and there is nobody around, but I am getting a lot of the workers and getting to know them,” said Bova. “Not a lot of the public will come see me.”

The unusual nature of the fair this year is making it hard for her to predict how business will turn out, but at the rate it’s going now, it doesn’t look good.

“If I could just break even, I would just be happy,” she said. “But at this point, I do feel like I will more likely leave in the hole. It just depends how much in the hole I will leave in.”

Still, Bova is trying to remain positive. She’s hoping things pick up and more people will return next weekend. In the meantime, she’s hoping people will put in the steps to eat at a fair favorite.

Alivero’s is located behind the Exposition Center, across the street from the Talent Showcase Stage, behind the Indian Village.

You used to be able to walk straight to it from gate nine, but that is closed this year. It's another reason why Alivero’s is getting less customers.

Now, if you enter through gate 10 and take a left, you can get there.