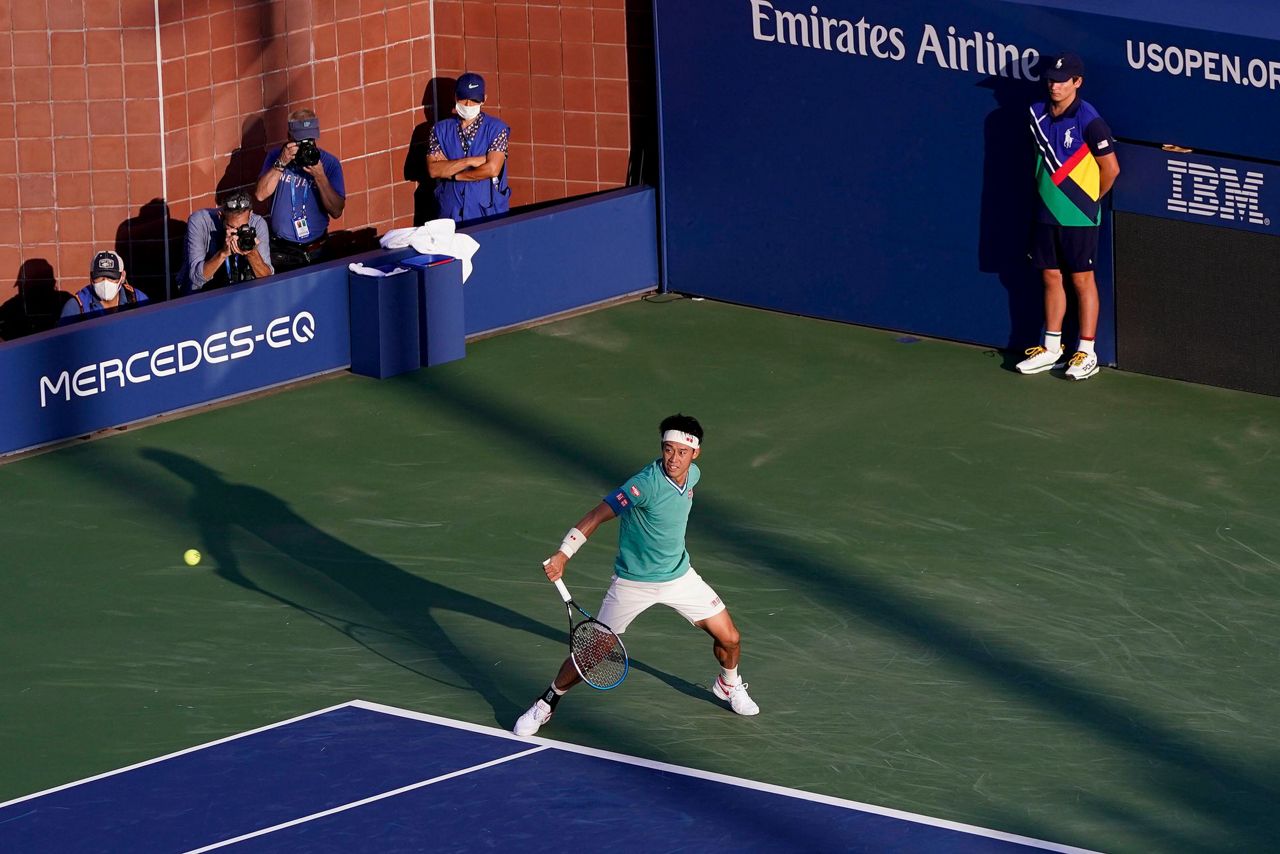 1 of 11
Kei Nishikori, of Japan, returns a shot to Mackenzie McDonald, of the United States, during the second round of the US Open tennis championships, Thursday, Sept. 2, 2021, in New York. (AP Photo/Frank Franklin II) 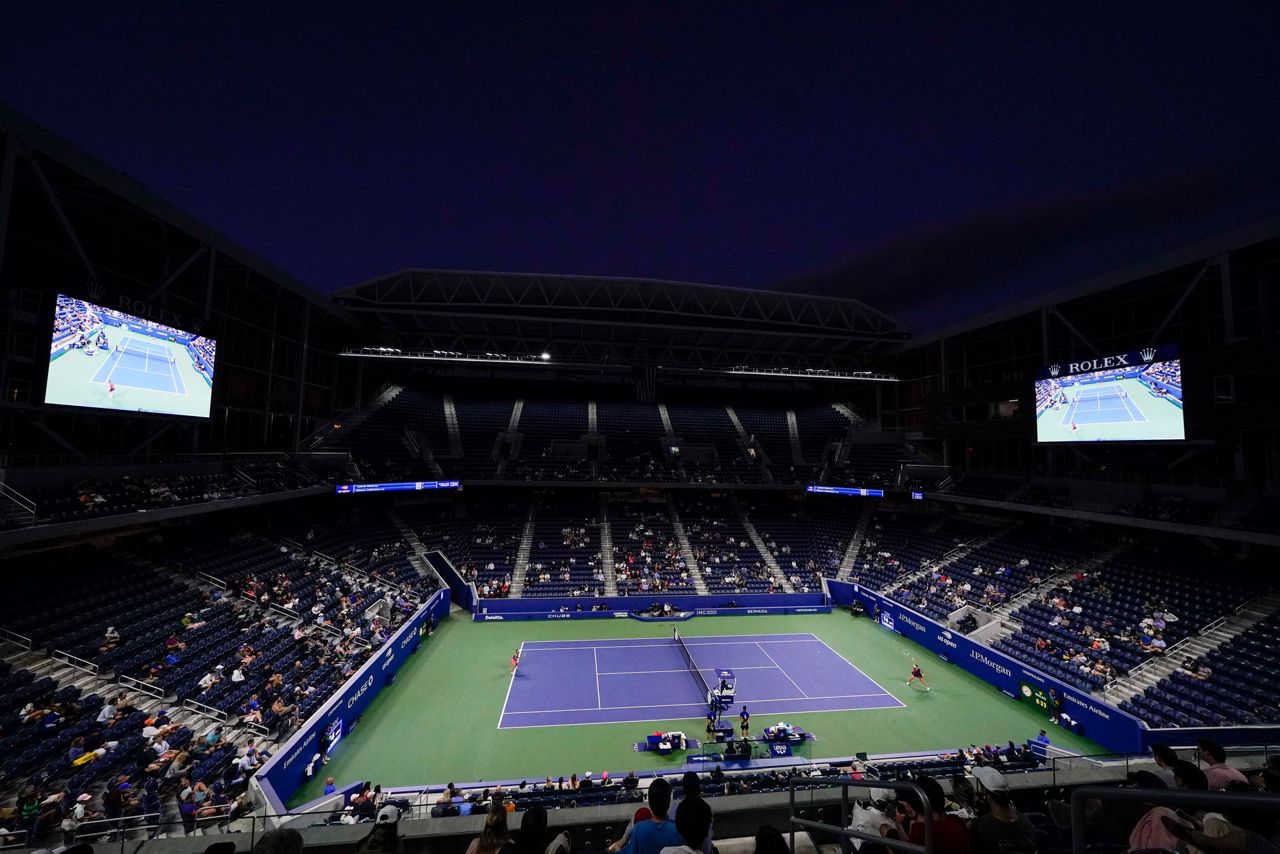 2 of 11
Lauren Davis, right, of the United States, returns a shot to Bianca Andreescu, of Canada, during the second round of the US Open tennis championships, Thursday, Sept. 2, 2021, in New York. (AP Photo/Frank Franklin II) 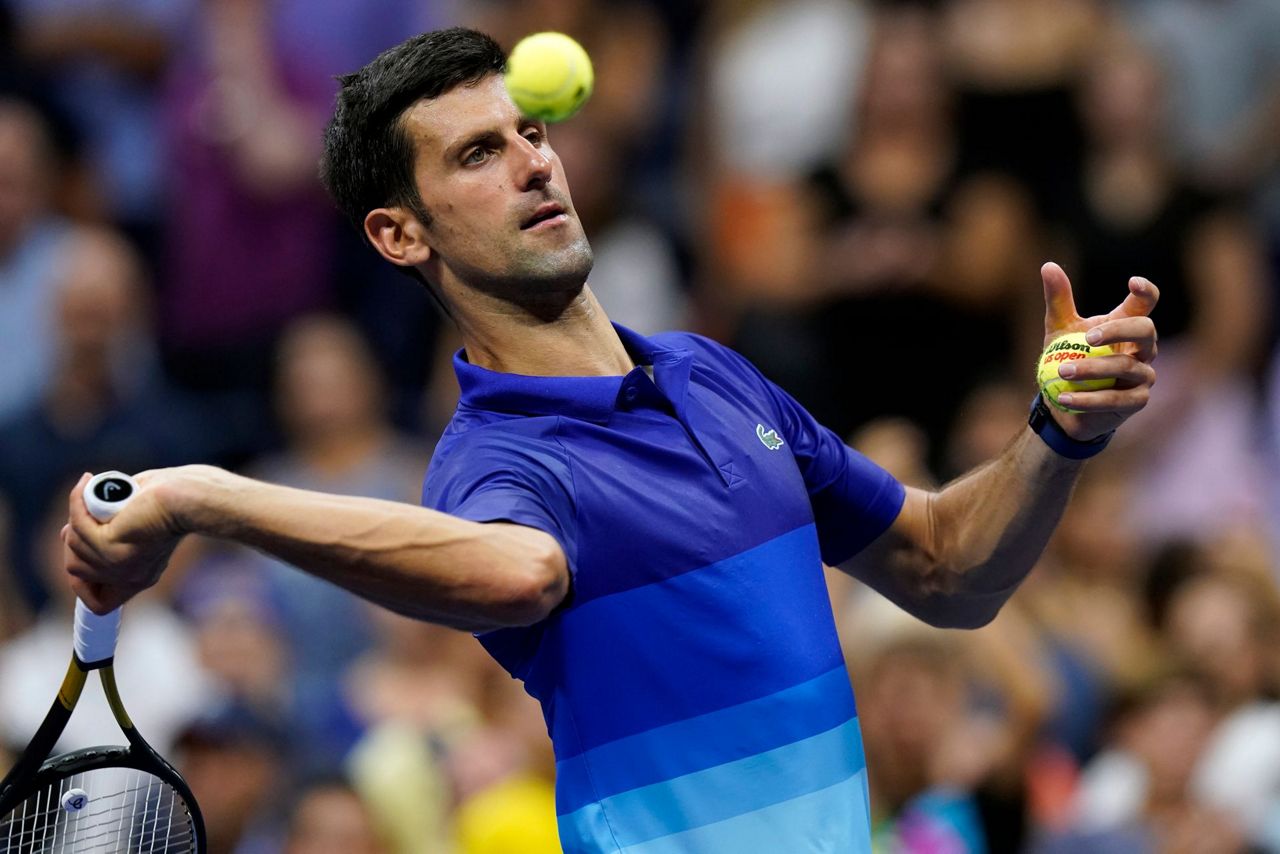 3 of 11
Novak Djokovic, of Serbia, hits balls into the stands after winning his first round at the US Open tennis championships, Tuesday, Aug. 31, 2021, in New York. (AP Photo/Frank Franklin II) 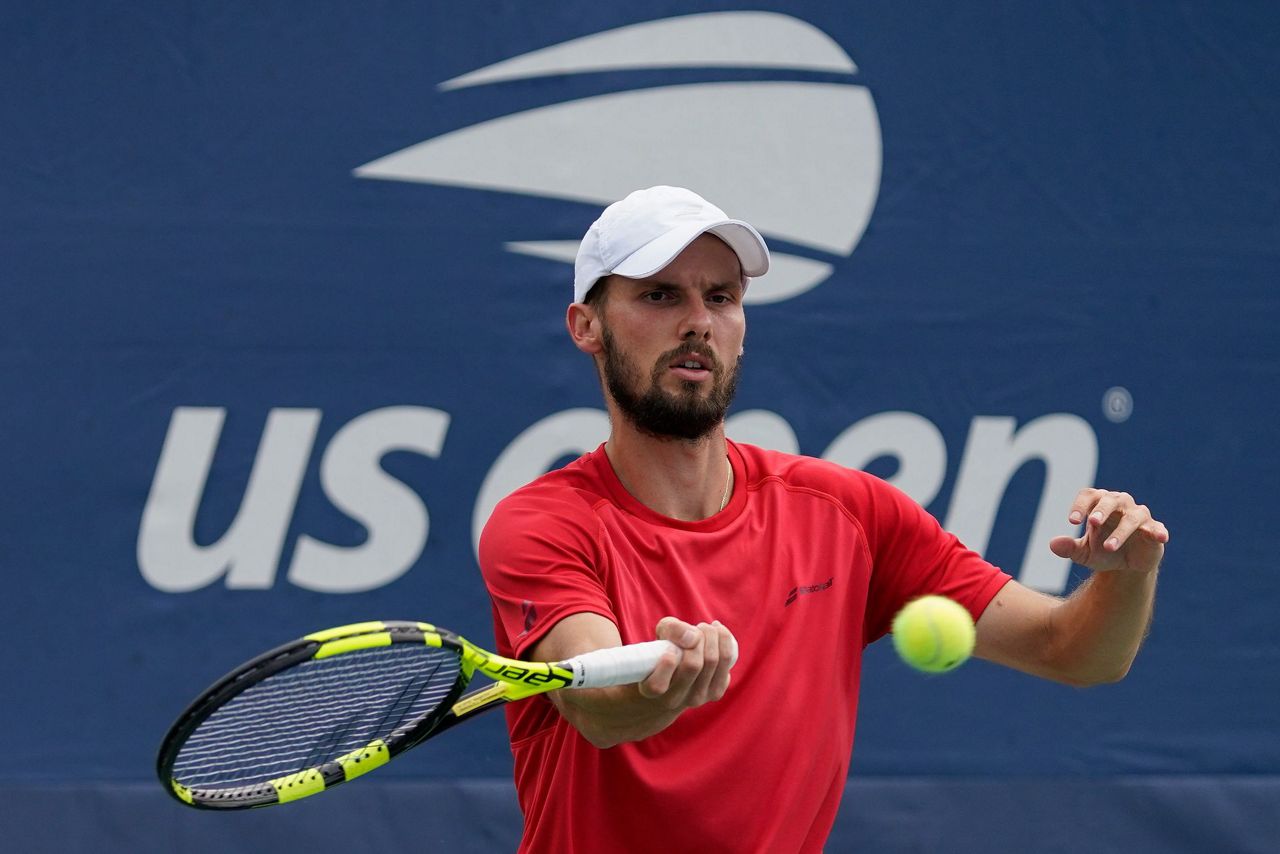 4 of 11
Oscar Otte, of Germany, returns a shot to Lorenzo Sonego, of Italy, during the first round of the US Open tennis championships, Tuesday, Aug. 31, 2021, in New York. (AP Photo/Seth Wenig) 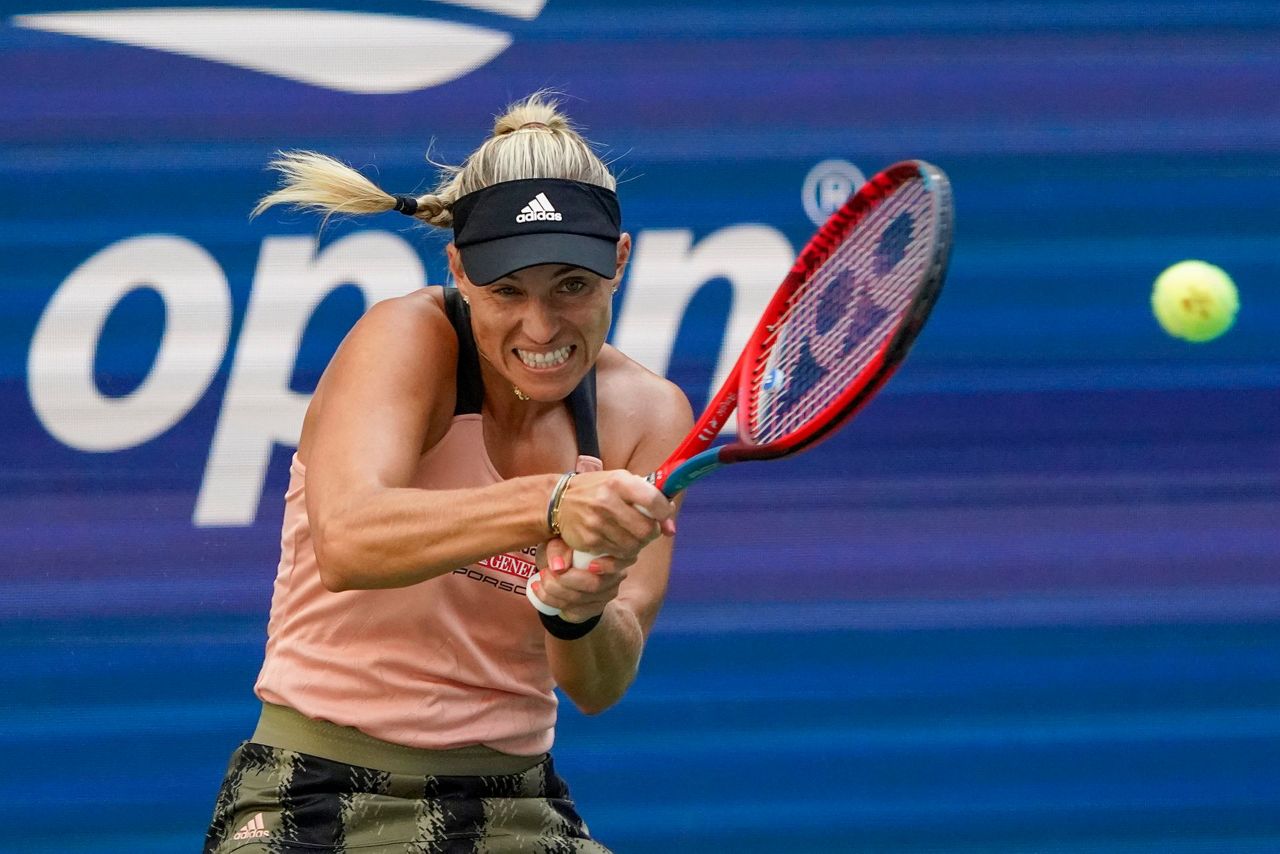 5 of 11
Angelique Kerber, of Germany, returns a shot to Anhelina Kalinina, of Ukraine, during the second round of the US Open tennis championships, Thursday, Sept. 2, 2021, in New York. (AP Photo/Elise Amendola) 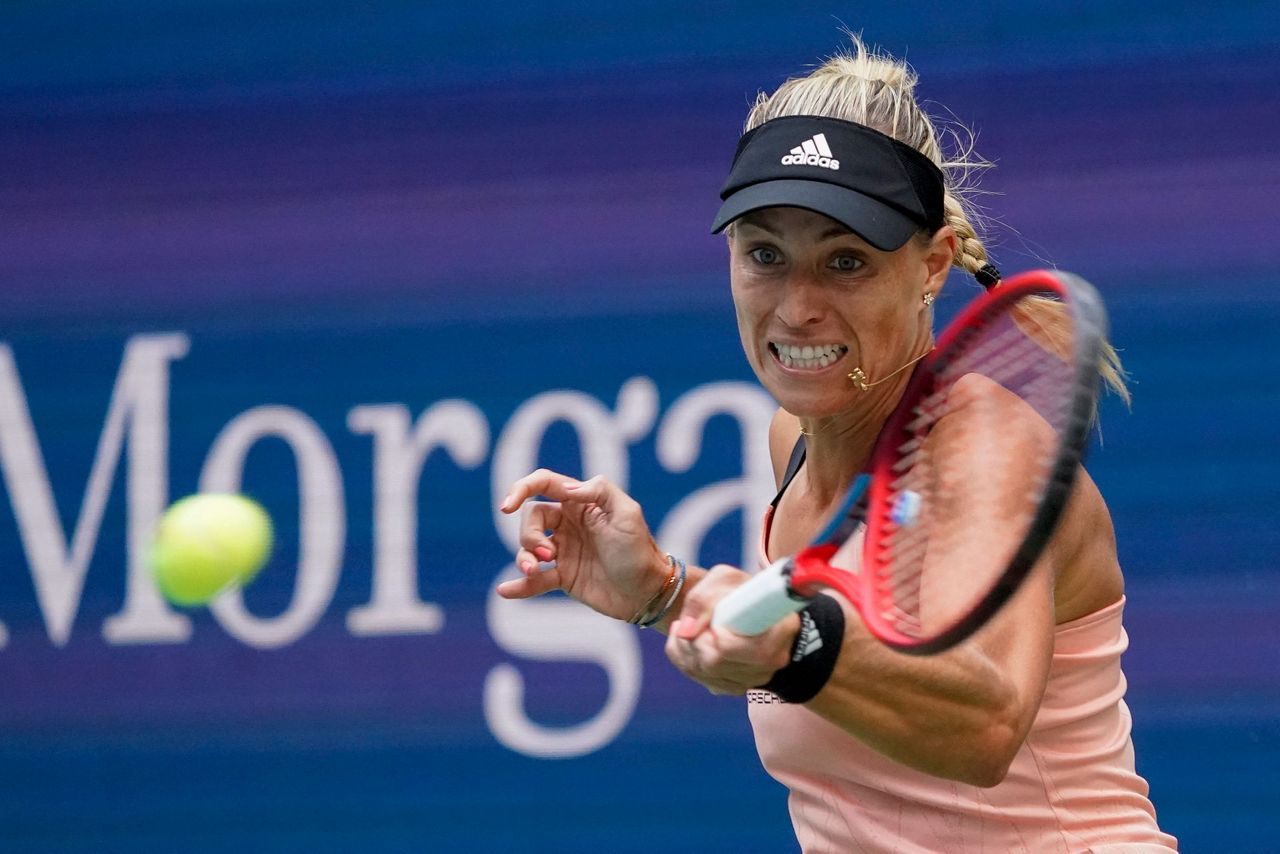 6 of 11
Angelique Kerber, of Germany, returns a shot to Anhelina Kalinina, of Ukraine, during the second round of the US Open tennis championships, Thursday, Sept. 2, 2021, in New York. (AP Photo/Elise Amendola) 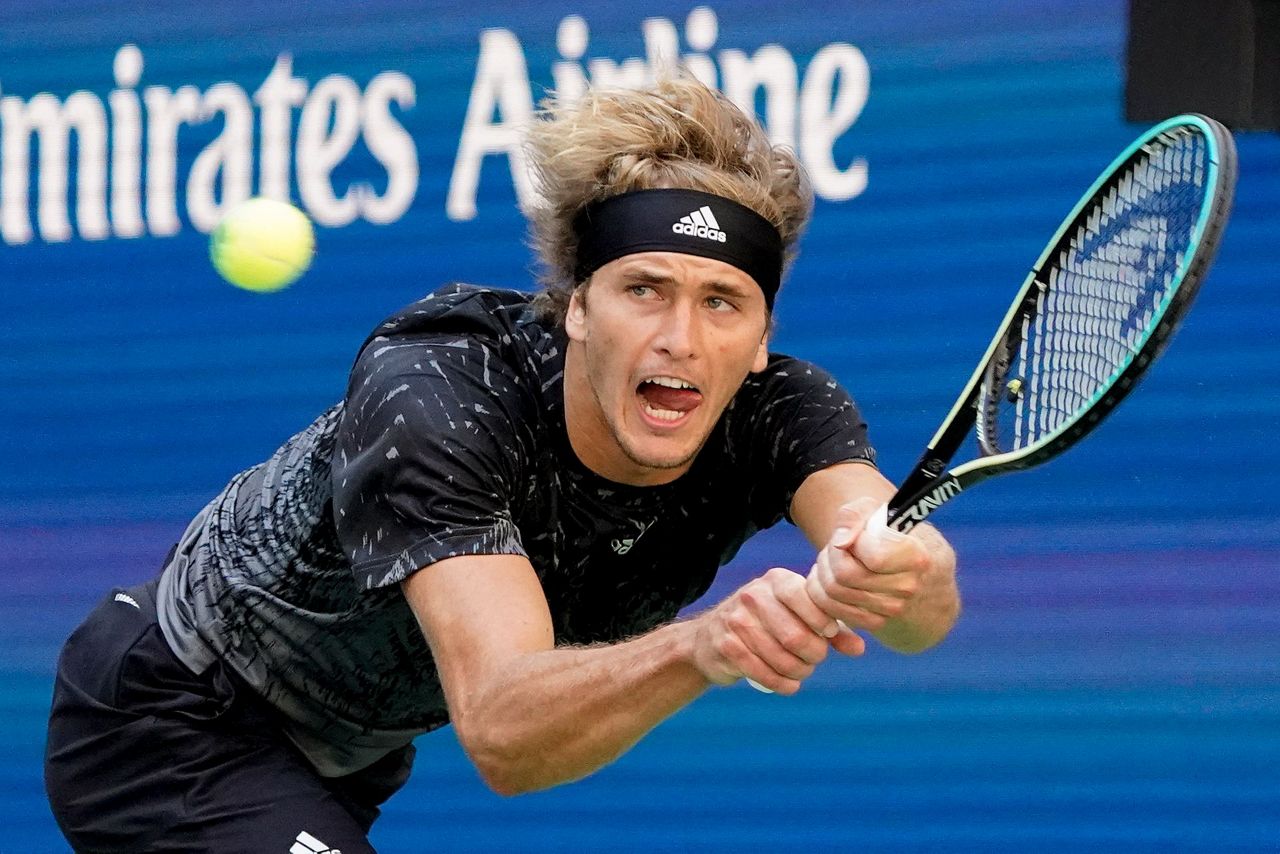 7 of 11
Alexander Zverev, of Germany, returns a shot to Albert Ramos-Vinolas, of Spain, during the second round of the US Open tennis championships, Thursday, Sept. 2, 2021, in New York. (AP Photo/Elise Amendola) 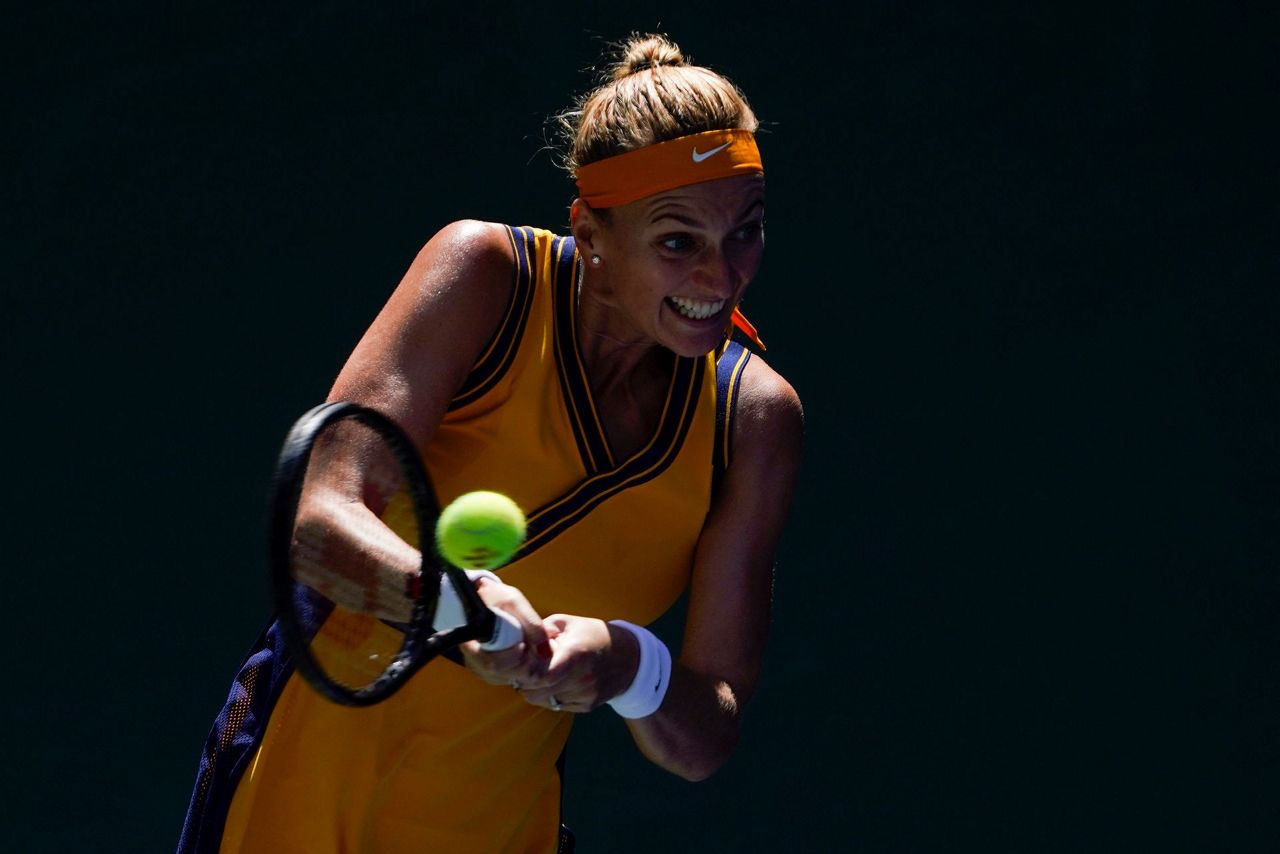 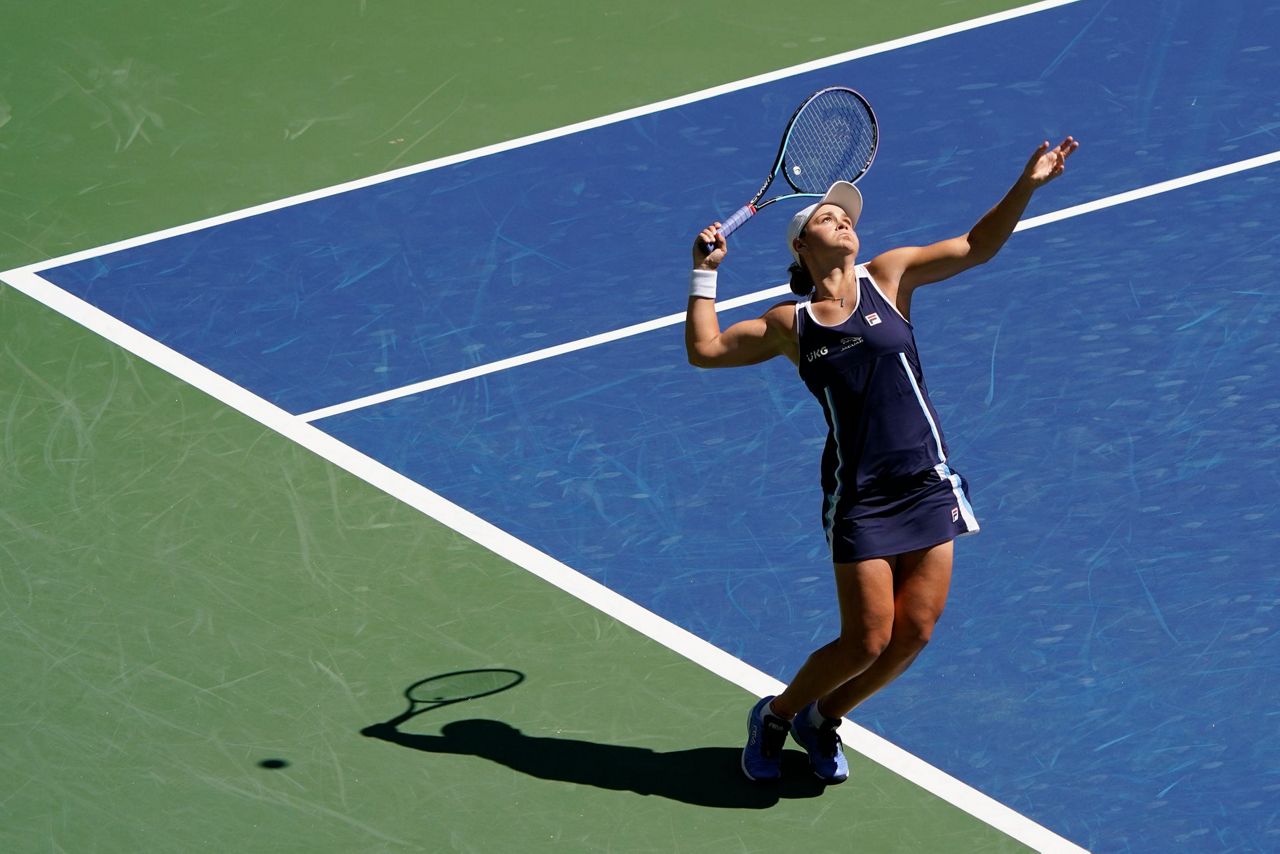 9 of 11
Ashleigh Barty, of Australia, serves to Clara Tauson, of Denmark, during the second round of the US Open tennis championships, Thursday, Sept. 2, 2021, in New York. (AP Photo/Elise Amendola) 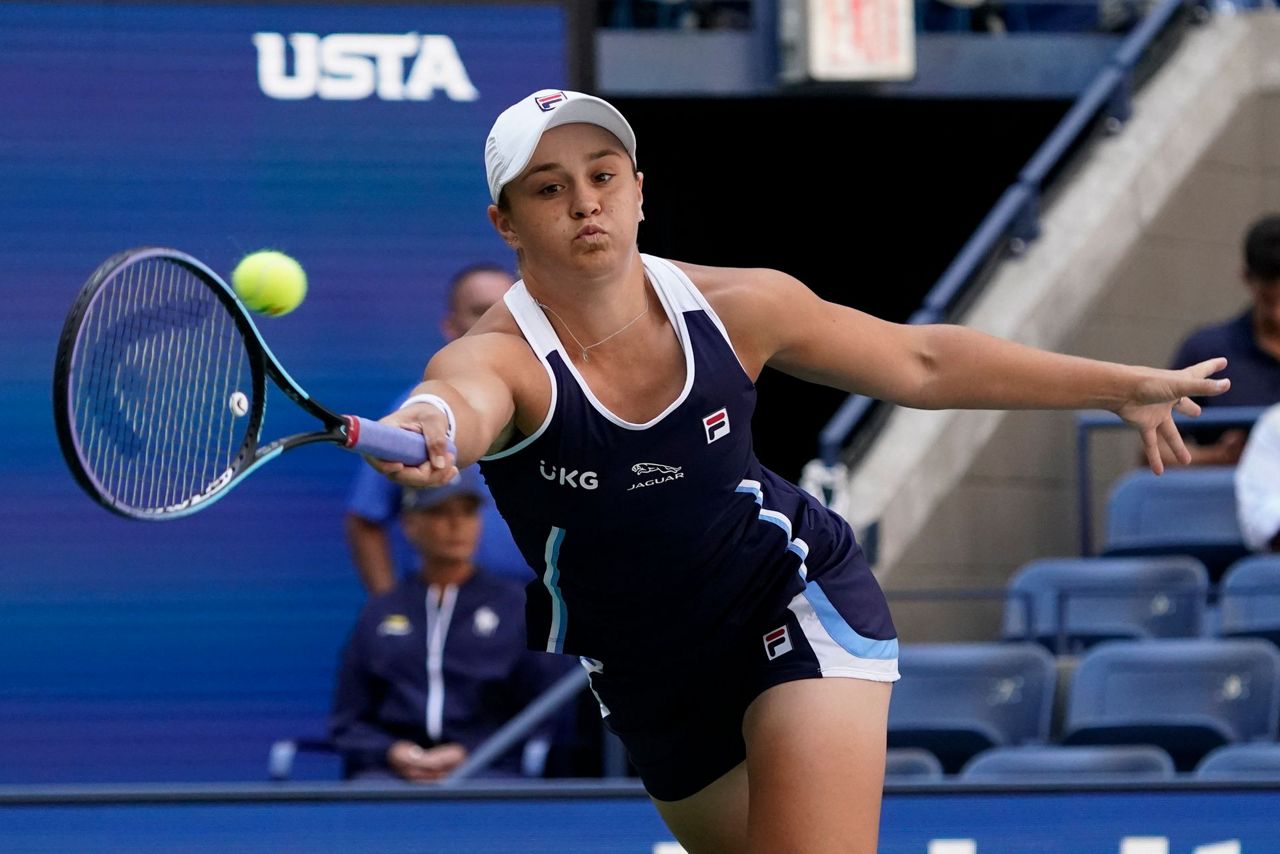 10 of 11
Ashleigh Barty, of Australia, returns a shot to Clara Tauson, of Denmark, during the second round of the US Open tennis championships, Thursday, Sept. 2, 2021, (AP Photo/Elise Amendola) 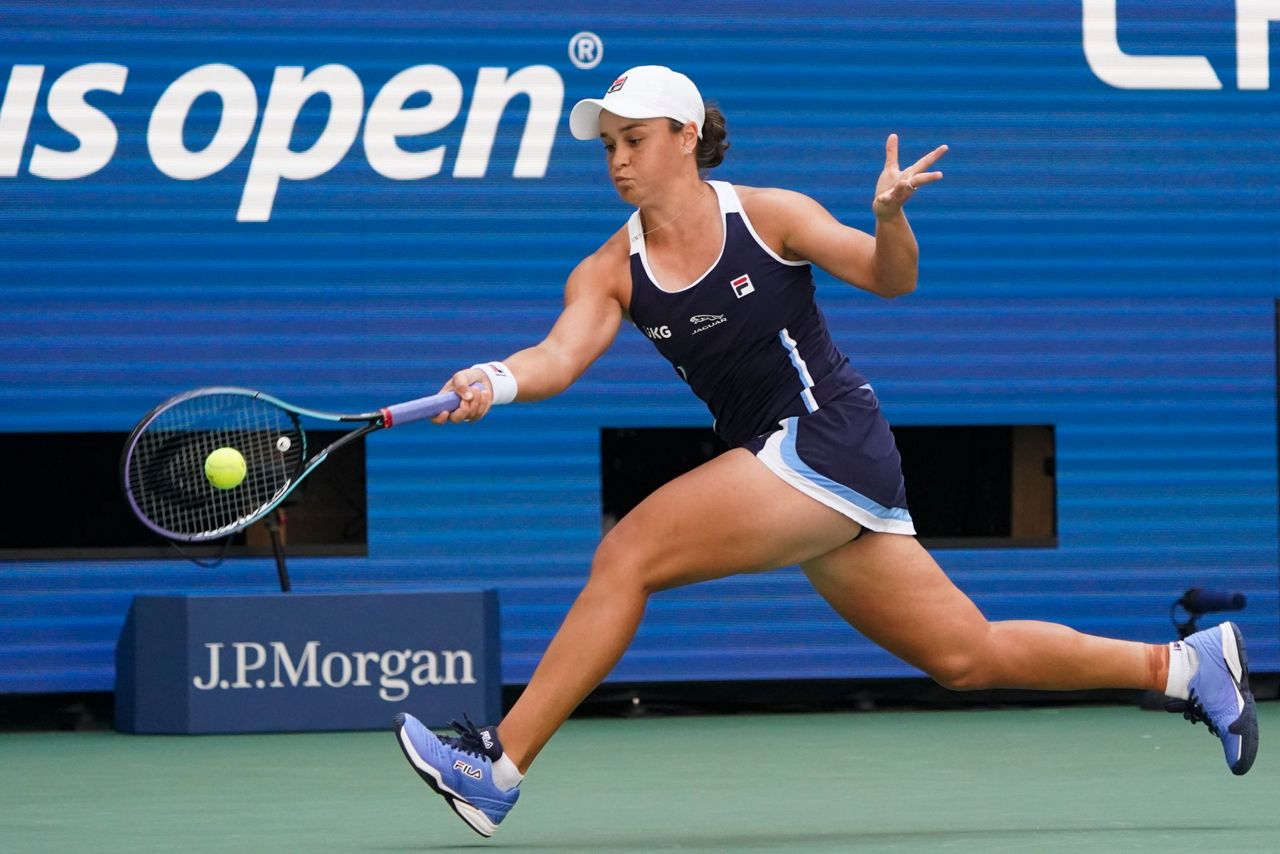 11 of 11
Ashleigh Barty, of Australia, chases a shot from Clara Tauson, of Denmark, during the second round of the US Open tennis championships, Thursday, Sept. 2, 2021, (AP Photo/Elise Amendola)

The Latest: Start of US Open play delayed a day after Ida

Nishikori improved to 27-7 in fifth sets, the highest winning percentage among active players, and avenged a loss to McDonald in Washington earlier this summer.

Novak Djokovic has won the first set of his second-round match.

Now he will hope for a smoother second set than he had Tuesday.

The No. 1 seed has a 6-2 lead over Tallon Griekspoor of the Netherlands at Arthur Ashe Stadium.

Djokovic easily took the first set against Holger Vitus Nodskov Rune in the first round before the Danish qualifier got the crowd on his side and won a second-set tiebreaker. But he battled cramps after that and Djokovic quickly won the final two sets.

That got Djokovic started on what he hopes will be his men's-record 21st Grand Slam title and his fourth of this season. No man has won all four majors in the same year since 1969.

Novak Djokovic is back on the court at Arthur Ashe Stadium, hoping to stay unbeaten in U.S. Open second-round matches.

The No. 1 seed is playing Tallon Griekspoor of the Netherlands, who received a place in the main draw when Roger Federer pulled out with a knee injury.

Djokovic is trying to break a tie with Federer and Rafael Nadal for most Grand Slam titles by a men's player. They all have 20.

Djokovic is trying to become the first man to win all four major titles in the same year since 1969. He is 14-0 in the second round at Flushing Meadows.

No. 1 doubles team Nikola Mektic and Mate Pavic were stunned at the U.S. Open and lost their shot at their second Grand Slam title of the season.

The Wimbledon champions were upset by Nathaniel Lammons and Jackson Withrow. The Americans beat Mektic and Pavic 6-2, 7-5. The Croatians had nine titles in 12 finals, including Wimbledon and the Olympics. They fell to 56-8 this year.

Pavic and Mektic both reached the U.S. Open final last season but with different partners. Pavic won with Bruno Soares over Mektic and Wesley Koolhof.

Lammons and Withrow were 4-10 this year.

Quality win for the qualifier. And he’s not alone in Flushing Meadows.

Otte is one of five qualifiers to reach the third round, the most in the U.S. Open since 1984. Fellow German Peter Gojowczyk, Henri Laaksonen, Alex Molcan and Botic van de Zandschulp are still in the longshot hunt for a U.S. Open title.

It’s the most qualifiers to reach any Grand Slam third round since the 2011 French Open had six.

Laaksonen and van de Zandschulp both beat seeded players in their early matches.

Otte will face Andreas Seppi, who knocked off 10th-seeded Hubert Hurkacz on Thursday. Hurkacz eliminated Roger Federer and No. 2 Daniil Medvedev en route to his first Grand Slam semifinal at Wimbledon in July.

Angelique Kerber wasted little time defeating Anhelina Kalinina 6-3, 6-2 to advance to the third round of the U.S Open.

Kerber will meet 2017 champion Sloane Stephens in the next round. Stephens was among the players stuck in traffic Wednesday night when the remnants of Hurricane Ida swept through New York. She decided to “ make the most of it” and posted photos of her and some New York pizza.

The 2016 U.S. Open champion continued the run of favored women advancing in the draw. No. 1 seed Ash Barty, No. 7 Iga Swiatek, No. 10 Petra Kvitova and No. 11 Belinda Bencic all won their matches on Thursday.

The only seeded woman who lost in the afternoon was No. 24 Paula Badosa. She was eliminated by Varvara Gracheva 6-4, 6-4.

Olympic gold medalist Alexander Zverev cruised to the third round of the U.S. Open with a 6-1, 6-0, 6-3 win over Albert Ramos-Vinolas.

Zverev is trying to make the U.S. Open final for the second straight year. He won the first two sets last year in the final against Dominic Thiem before losing the match in his first Grand Slam final.

Zverev won the gold medal at the Tokyo Olympics and is one of three players with four titles this season.

He needed only 74 minutes to win his 13th straight match.

The two-time Wimbledon champion (2011, 2014) improved to 31-13 at Flushing Meadows but the 10th-seeded Kvitova has never advanced beyond the quarterfinals. She used nine aces to reach the third round for the 11th time in her career.

The Czech player now trails only 2020 finalist Victoria Azarenka for most U.S Open wins among women in the draw.

Barty missed the tournament in 2020 because of the pandemic, staying home in Australia. The reigning Wimbledon champion, Barty had trouble closing out Tauson but survived and will try to reach the quarterfinals at Flushing Meadows for the first time.

Olympic gold medalist and 11th-seeded Belinda Bencic defeated Martina Trevisan 6-3, 6-1. Bencic reached the third round at the U.S. Open for the fifth time in her career. She reached the semifinals in 2019.

Women’s No. 1 seed Ash Barty has kicked off second-round action at the U.S. Open after the remnants of Hurricane Ida that swept through the Northeast delayed some matches by an hour.

Barty’s match against Clara Tauson started on time at Arthur Ashe Stadium under a sunny sky. Barty missed the tournament in 2020 because of the pandemic, staying home in Australia.

The U.S. Tennis Association said any fans with tickets for Thursday who could not attend the U.S. Open because of the lingering effects of the storm were eligible for an exchange for a comparable ticket to a session later in the tournament. The USTA encouraged fans attending Thursday's matches to use public transportation.

The start of play at the U.S. Open is being delayed at least an hour a day after the remnants of Hurricane Ida swept through the Northeast.

The U.S. Tennis Association said it needed to “evaluate the readiness of our site” on Thursday.

Matches that were supposed to begin at 11 a.m. were being postponed at least until noon.

The U.S Open faced numerous interruptions Wednesday night caused by heavy rain and wind from the remnants of the hurricane. Diego Schwartzman won a match that started at Louis Armstrong Stadium and was moved to Arthur Ashe Stadium after a break of nearly 2 1/2 hours while another match finished.

Heavy rain that made its way into Louis Armstrong Stadium despite the closing of the retractable roof forced U.S. Open organizers to call off play for the day at that arena.

Top-seeded Novak Djokovic was scheduled to play a second-round match against Tallon Griekspoor at night. Djokovic is trying to become the first man to win all four Grand Slam tournaments in the same year since 1969.