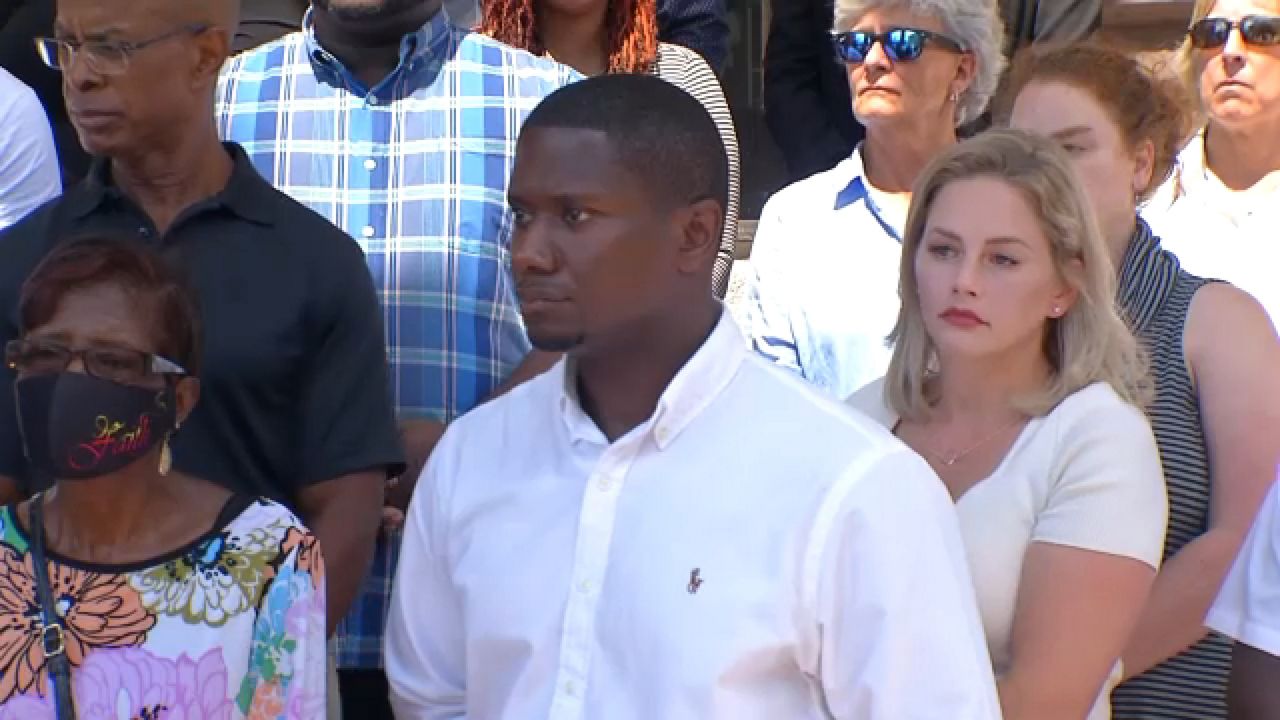 ROCHESTER, N.Y. — A Black Rochester firefighter says he is ready to sue the city and fire department. He says a superior in the Rochester Fire Department took him to a party meant to be a racist and sexually abusive take on Juneteenth.

RFD firefighter Jerrod Jones was joined by his attorney, friends and elected officials outside Rochester City Hall on Thursday to describe details of the alleged event and explain why he’s filed a notice of claim.

“It cut me very deeply," said firefighter Jerrod Jones. "I’m sorry to even have to be here today. But in order for things to change, we have to do difficult things. And one of those difficult things is speaking up against a department that you love with everything within you.”

The legal complaint says the party took place in early July at a home on East Avenue, and that it was Jones’ supervisor, a captain in the department who wanted to take Jones and two other firefighters to the party located in their district.

The complaint says when they arrived, there were Juneteenth decorations alongside buckets of fried chicken, a dancer apparently impersonating Democratic county legislator Rachel Barnhart and pictures of other local Democratic politicians and members of the Police Accountability Board staked across the grass.

“I’m so very sorry for what firefighter Jones has gone through," said Barnhart. "This vile, racist event was an affront to every single citizen in this city.”

Jones is a 14-year veteran of the department. The complaint says he reported this to his battalion chief the next day, but was disturbed to be working with his supervisor the next week, with no update on an investigation.

In a statement, Rochester Fire Chief Felipe Hernandez said the city of Rochester immediately launched an internal investigation and says the allegations are “serious,” and calls the alleged behavior “unacceptable.”

The supervisor in question remains on suspension until a disciplinary action has been reviewed and accepted, according to Chief Hernandez.

Mayor Malik Evans also spoke out about the investigation on Thursday afternoon at a separate event.

The lawmakers in attendance and Jones’ lawyer, Nate McMurray, promised a full investigation. McMurray says he wants to find out exactly what happened, to ensure it never happens again.

“It doesn’t have to be like this in Rochester, or America, or anywhere," said McMurray. "And none of us are perfect, but this is totally not who we are. And if it is who we are, then we need to change it. And I think we can.”

The Rochester Firefighters Association responded to the allegations in a statement saying:

On Friday, a spokesperson announced on behalf of the Blue Cross Arena, Rochester Amerks and Rochester Nighthawks that the organizations would be parting ways with Dr. Nicolas Nicosia, the man named in court documents as owning the home on East Avenue where the party was held: