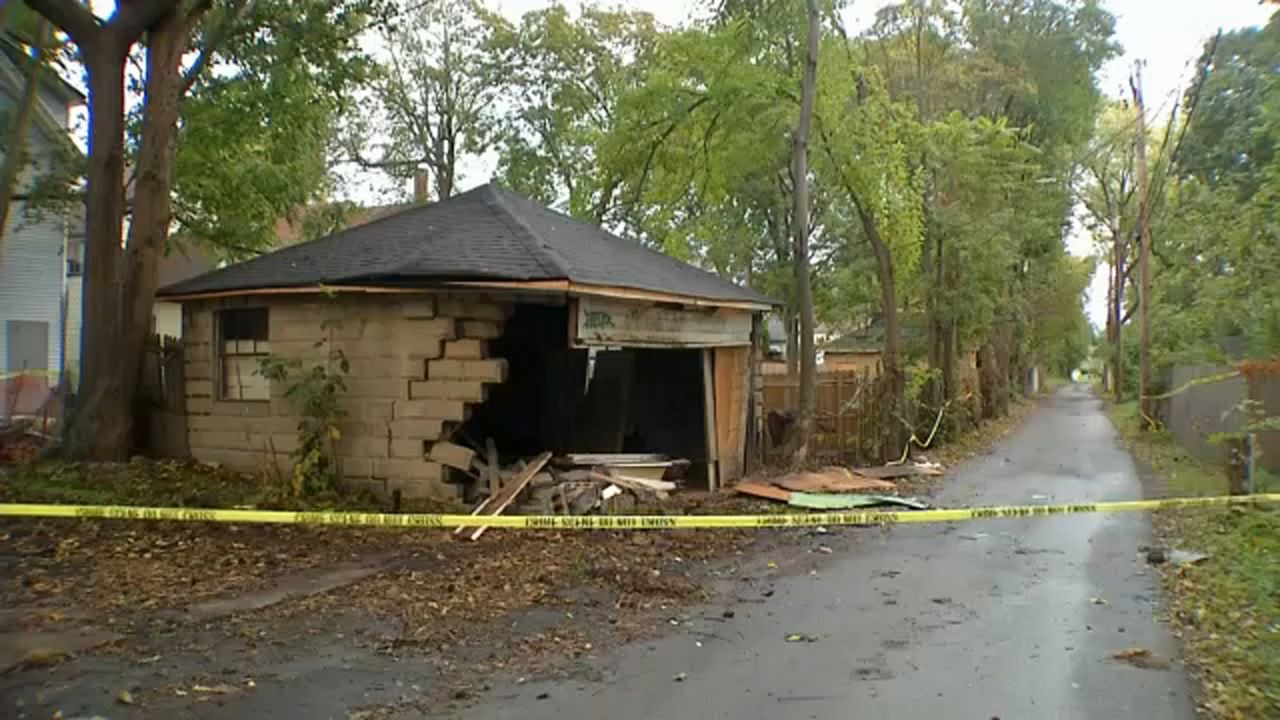 ROCHESTER, N.Y. — A community on Rochester’s southwest side has been left shaken after a deadly crash right outside of their homes.

Rochester police say an officer spotted a stolen vehicle on Bartlett Street but did not turn on the emergency lights and did not give chase. Despite that, police say the vehicle took off anyway.

According to RPD, the stolen car did not travel far before striking another vehicle at the intersection of Seward and Whittlesey streets. The stolen car was reportedly going so fast that the impact caused the victim's car to be sent at least 100 feet down Whittlesey Street before hitting a garage.

A man and a woman described by police as being in their late 30s to 40s were inside that car. Both were rushed to the hospital but the woman died shortly after arrival, officials say. The man survived but remains in critical condition. Their names have not yet been released.

This morning on @SPECNews1ROC I’m at the scene where a stolen vehicle crashed into another vehicle off of Seward St. The impact caused the civilian vehicle to be pushed 100 ft down Whittlesey St. and into this garage. A woman in the car has died. A man is in critical condition pic.twitter.com/1aUA3h9Xdm

On Monday morning, neighbors came out to the home of Gwendolyn Hymes to clean off debris from the crash that surrounded her yard and spread across the ramp in front. Wires, glass and pieces of car littered all over.

"He split that whole entire pole and it came down. And all of this is the result,” said Hymes.

An electric pole in front of her home has since been fixed by RG&E and a new one stands, but Bruce Register was one of the neighbors who cleaned the rest of the debris up for Hymes. He was also the first on the scene of the crash Sunday afternoon.

"I was sitting in my living room at the time of the accident,” said Register. “Me and my son. It was like a big explosion. So I ran out the door to see what it was. And of course, I'd seen the car turned over. The first thing I did was run to the vehicle to see if I could pull anyone out of the cars. And the police told me that the first vehicle was a stolen vehicle and not to touch anybody in the car, so I ran to the other car down the street and both of them was unconscious at the time."

Police say four suspects were in the stolen vehicle. Two of them were ejected in the crash. A third tried running away from the scene but was taken into custody. The fourth suspect was inside the vehicle when police arrived. All four were taken to the hospital.

Neighbors helped clean the yard and ramp of Gwendolyn’s home this morning. It was covered in debris from the fatal crash Sunday at the intersection of Seward and Whittlesey St. I spoke to her and another neighbor about what they saw of it. That story later on @SPECNews1ROC pic.twitter.com/fV6GWskOTP

Hymes said she saw the suspects, then went to the back of her house where she found the man and woman who were hit. The car had crashed into a detached garage on a different property.

"My heart just dropped because that's a senseless death,” said Hymes. “None of this had to happen. If people used their minds and think before they react. It's senseless. Somebody done lost their life for no reason."

Hymes and her neighbors say they are thankful that the crash did not cause a car to go through one of their homes.

"If that accident would have happened before that I would have been a goner,” said Hymes.

Register said this is not the first time a car has crashed along Whittlesey Street. In fact, he said one car has run into his yard before. Someone not familiar with the area may think the narrow street is only an alleyway, and not think to stop and look down it for an oncoming car.

"This is about the third one in the last couple of years,” said Register. “It's usually high-speed chases or people speeding through these streets. Good thing there weren't no kids out here. It terrorized my son, he's 7 years old. He was terrorized all day."

Register and Hymes said they have been asking for stop signs and speed bumps to be put up along the small street to at least get people to pause a second. They wonder if that would have been enough to save the woman's life.

"There's kids around here now all the time on skateboards and scooters," Register said. "And it's sad that we gotta have people die for stuff that only costs a few dollars to change."

Police said three of the suspects had prior run-ins with the law within the last month. One was arrested in a stolen vehicle with drugs, with the intent to sell, and was issued an appearance ticket. That suspect had also been caught in three other stolen vehicles since June of 2019.

The second suspect was arrested for being in a stolen vehicle and issued an appearance ticket too.