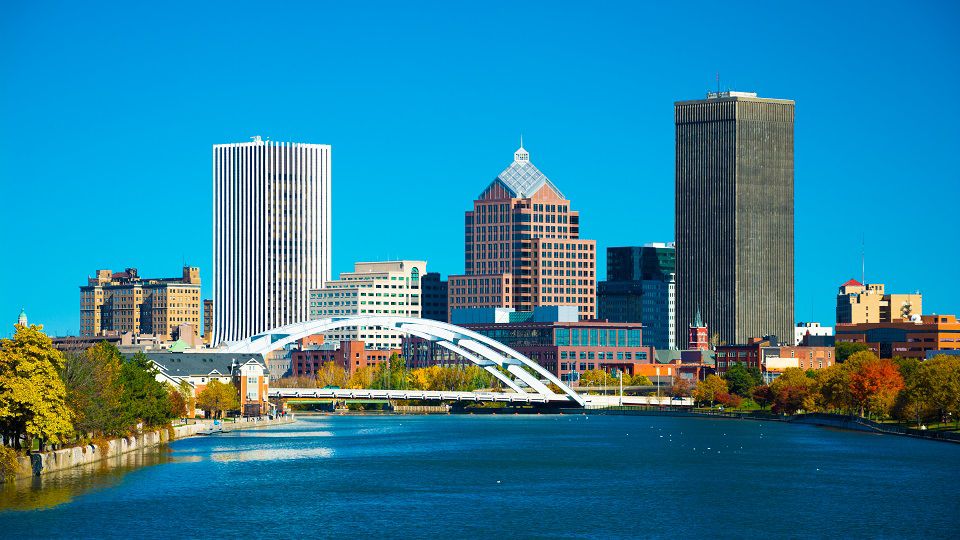 A Conversation with Dr. Shaun Nelms on Systemic Poverty in Rochester

Rochester has been in the news a lot lately, starting with the delayed details about the homicide of Daniel Prude, and then, following the release of the video of Prude’s death, for the protests which followed. This weekend, Rochester was again in the news, this time for a mass shooting that left 14 people injured and two bystanders dead.

Violence and unrest are symptoms of the city’s greater systemic problems: Problems detailed in a report that came out in August, published by ACT Rochester and the Community Foundation, called "Hard Facts," which looked at race and inequality in the nine-county Rochester region.

What the authors found was disturbing, and at the heart of why the city is suffering from multiple social ills at once.

According to the study, Rochester is one of the most racially segregated communities in the U.S. The city has one of the greatest income disparities in America based on race and ethnicity, as well as one of the country’s greatest concentrations of poverty.

A separate national study cited in "Hard Facts" found that Rochester is the number one "hoarder city" in the nation. What that means is that Rochester is a place with a lot of resources, but tremendous inequality when it comes to the distribution of those resources.

Not surprisingly, the disparity of income between African Americans and Latinos and whites in Monroe County is fifth highest in the country.

So how do we address these systemic problems?

Prior to the UR-East High partnership, East was one of the worst schools in the state and was slated for closure. Under Nelms’ leadership, both attendance and graduations rates have markedly improved.

The following is a lightly edited transcription of a phone interview with Dr. Nelms about the systemic issues facing Rochester:

CT – Where should we begin?

SN - "We need to stop asking 'What’s wrong with Rochester,' and instead go deeply into why this has happened, and be honest about what we discover when we ask why.

Historically you look at Rochester going back to the ’64 uprising. Rochester played a pivotal role in the nation’s civil unrest. What we saw through the ’64 uprising was the intentional focus on red-lining, keeping communities separate. Years later, you see the fall of Kodak, and having no space for skilled or unskilled labor. At the same time, you saw the school system failing to properly educate its citizens. Even today, the Rochester City Schools’ dropout rate is 25 percent.

It’s the perfect storm. You have an educational system that, historically, has not prepared its students to be citizens, you have generational issues, parents who didn’t graduate from high school. I still have kids at East who are the first to graduate in their family. You see in housing, education and workforce development, that Rochester sits at the perfect intersection of poverty and wealth."

CT – So the system in Rochester works for some.

SN – "If you have the skills, you can make a lot of money here in technology or precision manufacturing. If you were fortunate enough after Kodak to have family in the trades and you got them into the unions, then you’ve created generational wealth in your own family. Other individuals and groups have not created that generational wealth.  There is both generational wealth and poverty being created in Rochester."

SN - "Look at the industries we have. A robust health care system, a number of colleges and universities. There are skilled jobs. It’s just that the schools are not preparing the labor force to actually fulfill those job vacancies. There are also a number of philanthropic organizations seeking to support workforce, educational and healthcare opportunities, but it’s not done in a coordinated way."

CT --- What are we going to discover when we ask “Why are we here?"

SN – "That systemically we are getting exactly what we designed. (Rochester) was designed to leave a subset of individuals and certain segments of the community, particularly the urban center, with a lack of skills and jobs and education. And you’re going to see very robust suburban centers. While we have some of the highest rates of poverty in Rochester, we have suburbs that rank among the wealthiest, within the same county.

We can’t ignore that poverty and wealth have been intentionally and structurally cut off from one another.

That doesn’t mean that the wealthy have to bear the responsibility of the poor, or that the poor should envy the wealthy. What we should be talking about doing is, how do we create pipelines, starting with education, and community advocacy and agency, to be able to provide a more direct pathway for individuals who seek to get out of those impoverished circumstances. I’m not talking about meritocracy, meritocracy is about the individual. I’m talking about systemic equity."

CT – Can you be specific?  What pathways are you talking about?

SN – "Education. The graduation rate in Rochester is about 65 percent and it just cracked 60 percent in the last 2 years. The drop-out rate is 25 percent in the city. Rochester is the lowest performing district in the state of New York. I think if you’re going to create alternate pathways for individuals you have to address the school system."

SN – "We have a number of colleges and universities here. I would partner with them in terms of helping to bring forward what the research suggests we should do in practice. You’ve heard of the East Projects? I would expand the East Projects. We are successful because we believe in true advocacy and agency, so we are empowering students and parents. We have an abundance of social and emotional support in our building, in counselors and social workers. We have created curricula that reflects who our students are, yet is still challenging for them.

"Also, if you’re going to change the education system in Rochester, you have to adequately fund it to ensure accountability, and make sure the dollars are going to programs and not people."

CT – What do you mean by that?

SN – "Before you invest in hiring more people, you have to create a robust plan of instruction. If you look at the EPO (Educational Partnership Organization) agreement, it’s heavily based in a systemic instruction response to students coming to us under-taught. If we know how to address kids at the secondary level, and know how expensive it is to catch kids up from, potentially, pre-K through 6th grade, not ever being at grade level, then when you expand the model, you have to fund it. All of this needs to mirror what kids in suburban schools get in common practice."

CT -- What about desegregation?

SN – "I think desegregation by making resources available for all kids is something that I completely believe in. Desegregation by simply mixing kids by color and by economics and assuming that’s going to be solution, I think is a flawed approach.

You look at the national scene right now, we are more divisive racially, at least openly, then we’ve ever been. Imagine putting a kid who’s been disenfranchised by society in a school setting where they don’t believe in Black Lives Matter, or they don’t believe in the value of individuals or believe that structural racism even exists? That’s not what my idea of desegregation is.

Quite frankly, I don’t think that was its original intent. I believe that kids should have adequate curriculum, well-trained teachers, and school buildings that are conducive to learning. They have, perhaps, air conditioning, running water, they have clean bathroom facilities. You take a look at some of the city schools and the conditions are deplorable. And that’s today.

I’m talking about desegregating the funds and the resources that create very calm learning environments for some kids depending on their zip code, and very deplorable conditions for others."