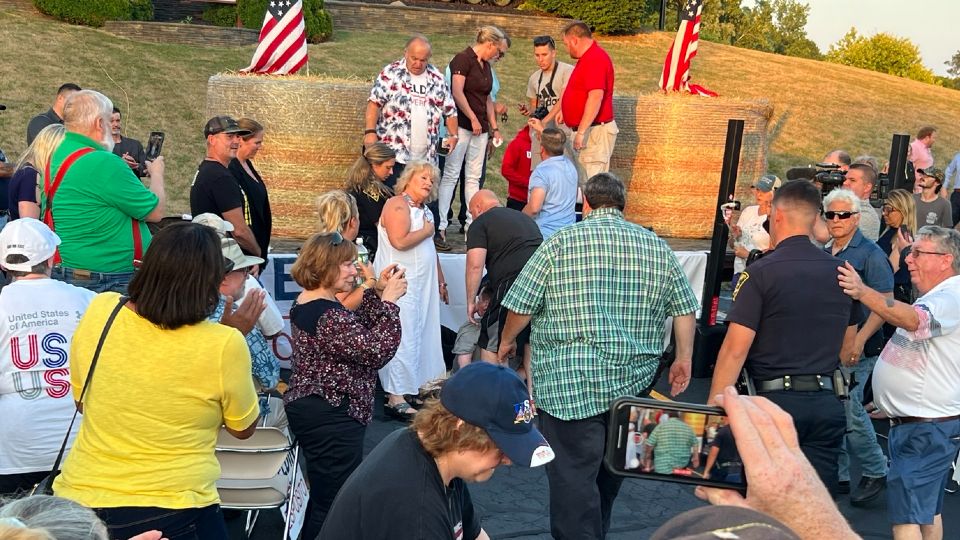 A crowd gathers after Republican candidate for New York governor Lee Zeldin was attacked during a speech in Perinton Thursday, his campaign says. (Courtesy: Viewer photo)

U.S. Rep. Lee Zeldin, the Republican candidate for New York governor, was assaulted by a man who apparently tried to stab him at an upstate event Thursday but the congressman escaped serious injury.

“I’m OK,” Zeldin said in a statement. “Fortunately, I was able to grab his wrist and stop him for a few moments until others tackled him.”

Zeldin’s campaign said the attacker was taken into custody and the congressman continued his speech. He is challenging incumbent Democratic Gov. Kathy Hochul this November.

The attacker climbed onto a low stage where the congressman spoke to a crowd of dozens outside Rochester, flanked by bales of hay and American flags. A video posted on Twitter shows the two falling to the ground as other people try to intervene.

The male, identified as David G. Jakubonis, 43, of Fairport, had a weapon in his hand, swung it towards Zeldin’s neck, and told him, “You’re done.” Jakubonis is charged with felony attempted assault and was arraigned in Perinton Town Court and released on his own recognizance.

Langworthy told The Associated Press that he didn’t have any details on the attacker or his weapon but exchanged text messages with Zeldin afterward while the congressman was speaking to police.

“He is fine. He’s not seriously injured. It’s just a chaotic scene there,” Langworthy said. He said Zeldin had “just a little scrape” but it wasn’t what anyone would consider an injury.

"Congressman Zeldin, Alison Esposito and all members of Team Zeldin are safe following tonight’s attack. Far more must be done to make New York safe again. This is very much getting out of hand in this state. Unfortunately, Congressman Zeldin is just the latest New Yorker whose life has been affected by the out of control crime and violence in New York. This needs to stop! Thankfully, we still have exceptional men and women in law enforcement answering the call to protect our streets.”

"Tonight, Congressman Zeldin was targeted in a violent attack at a campaign rally stop in Monroe County. Thanks to the swift action of several brave eventgoers, the perpetrator was subdued. Congressman Zeldin and all of the attendees are safe, but this could have ended much worse. It’s not a coincidence that just hours earlier, Kathy Hochul fanned the flames of hate by directing her supporters to his rally schedule. This is unacceptable conduct for anyone, let alone a sitting governor. It’s not enough to condemn the attack, she must apologize and tone down her hateful rhetoric immediately.”

"My team has informed me about the incident at Lee Zeldin's campaign event tonight. Relieved to hear that Congressman Zeldin was not injured and that the suspect is in custody. I condemn this violent behavior in the strongest terms possible — it has no place in New York."

In a statement, Hochul condemned the attack and said she was “relieved to hear that Congressman Zeldin was not injured and that the suspect is in custody.”

Deputy Brendan Hurley, the Monroe County Sheriff’s Office spokesperson, gave a statement to the Rochester Democrat and Chronicle that said the office “is aware of an incident at the speech of gubernatorial candidate Zeldin this evening. A suspect is in custody and Major Crimes is investigating.”

Messages seeking information from the Monroe County District Attorney’s Office were not immediately returned, and phone messages were left with the county’s emergency dispatch.

Langworthy called on Hochul to issue a security detail for Zeldin to protect him on the campaign trail.

Zeldin, an Army Reserve lieutenant colonel who has represented eastern Long Island in Congress since 2015, is a staunch ally of former President Donald Trump and was among the Republicans in Congress who voted against certifying the 2020 election results.

He has focused his campaign on fighting crime but faces an uphill battle against Hochul. He’ll need to persuade independent voters — which outnumber Republicans in the state — as well as Democrats in order to win the general election.

Democrats are expected to focus on Zeldin’s vocal defense of Trump during both of his impeachments and objection to the election results.