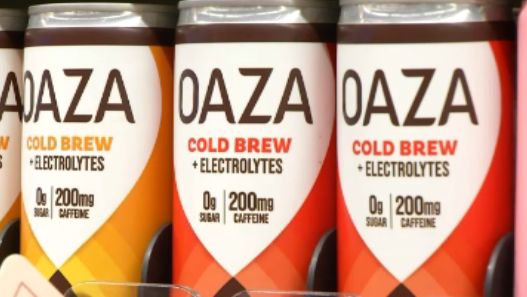 Loyalists in upstate New York just have a little different relationship with Wegmans than most people do with their grocery stores. Pittsford native Jeff Burbank is no exception.

"I grew up shopping at Wegmans with my mom and I'd go every week and just loved to walk the aisles, enjoy the selection the value and just the customer service at Wegmans and it was always just a place I loved to be at," he said.

Burbank is the founder of Oaza Coffee, a cold brew with electrolytes. He got the idea when he was traveling for businesses, drinking sometimes five cups a day and still ending up not only tired but dehydrated.

"At the time I was actually traveling to Las Vegas of all places, so I was tired, jet-lagged and spending time in the desert and that was actually the inspiration for the name," he said. "Oaza actually translates to 'oasis' where you find refreshment in an unexpected place."

The company is headquartered in New York City but rooted upstate.

"I studied entrepreneurship at Syracuse and also had the opportunity to meet a lot of people that I would partner with later on with Syracuse. Someone else that was early at Oaza went to Syracuse and a lot of our supporters and investors are Syracuse alumni too," Burbank said.

The company launched in 2020 during the pandemic. Burbank said this summer it got its biggest break so far: A spot on the shelves of Wegmans stores.

"It's the biggest deal really for a startup in food and beverage like us. As we all know as Rochesterians, Wegmans is truly the best supermarket that you can find," he said. "It's ranked number one in the country and it's the best I've ever been in."

Burbank said he's enjoying the opportunity to spend time again in upstate New York. The coffee is in southern California as well.

The plan he said is to start on the coasts and move inward.

"We're sold at airports around New York City area and just looking to really expand to other grocery stores around the country," Burbank said.

In many ways the CEO feels like he's come full circle. He said his first job was at Chase-Pitkin, a now-closed home and garden chain that Wegman's owned.