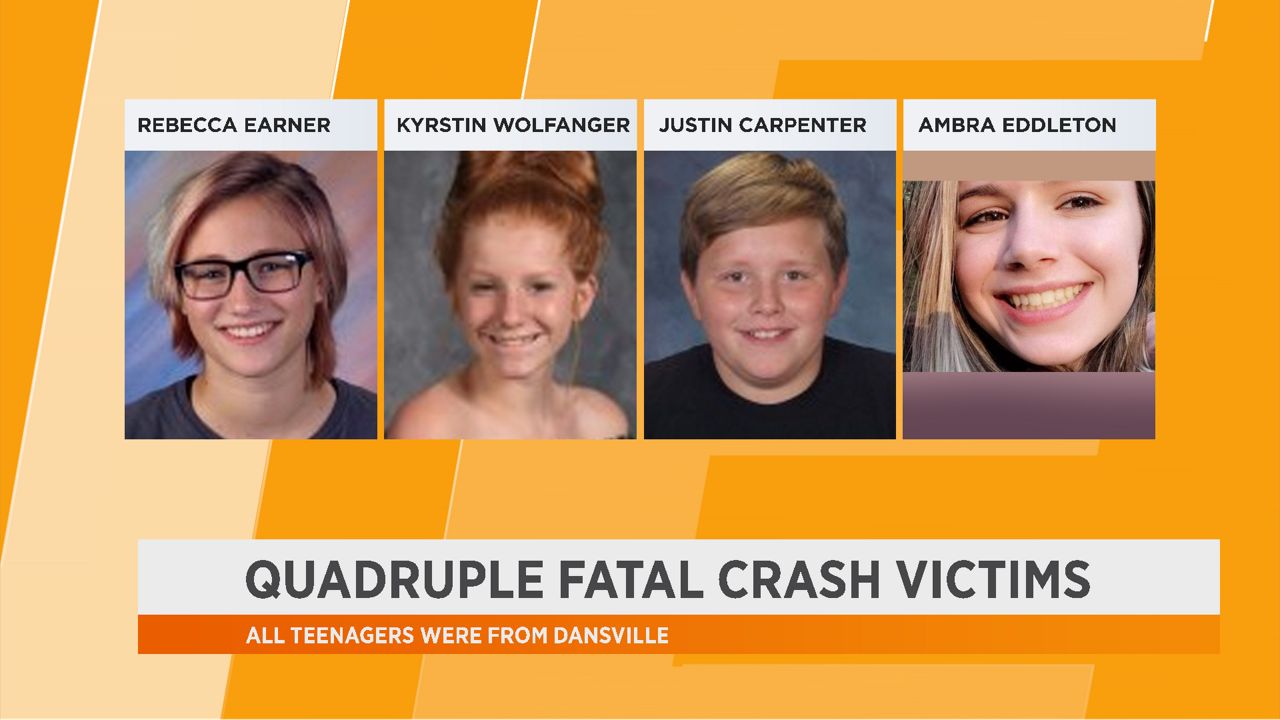 Four people are dead and another hospitalized following a crash in Allegany County.

It happened at the intersection of County Route 13C and Route 13 in the town of Burns around 4:30 a.m. Saturday.

Police say the driver Rebecca Earner, 16, failed to stop at a stop sign, drove through the intersection, struck an embankment and a tree. She and three other passengers — Ambra Eddleton, 16, Justin Carpenter, 14, and Kyrstin Wolfanger, 14 — were pronounced dead at the scene.

GoFundMe pages have been set up to pay for funeral expenses for all four victims:

The only surviving passenger Kelsi Bird, 16, was taken by helicopter to a Rochester-area hospital — she has since been released. Police say she was the only person in the car wearing a seatbelt.

Investigators say the crash was a recipe for disaster: the driver didn't have permission to use the car, only a driver's permit, inexperience driving mixed with teens and music, and possibly fog.

According to police, the vehicle was traveling 50-60 miles-per-hour when it struck the tree. No brakes were applied, however investigators don't believe there were any mechanical problems with the car.

"Unfortunately, we see this happen every summer right and if you consider the last five years about 3,500 people have been killed during the 100 deadliest days, that's about 700 lives every summer," said Elizabeth Carey, AAA.

A proposed change to seatbelt legislation, pushed by AAA, did not pass. It would require all backseat passengers to wear seatbelts. Under current law, only those younger than 16 have to use the seatbelt in the back seat.

"I’m not judging, we’re not pointing blame, you know if you want to survive a crash in a motor vehicle the best way to do it is wear your seatbelt," NYSP PIO Mark O'Donnell added.

Alioto says he went to the scene of the crash after hearing about it and assisted where he could.

Memorial services have been set for all of the victims.

Earner's calling hours will be held Wednesday, July 31 at the FourSquare Church, 49 West Ave., Dansville. It's from 4-7 p.m. Funeral services and burial will be private and held at the convenience of the family.

Calling hours for Wolfanger will take place Thursday, August 1 at the same location. It's from 4-7 p.m. Funeral services and burial will be private and held at the convenience of the family.

Carpenter's calling hours will take place Friday, August 2 at the same location from 4-7 p.m., followed by funeral services. A private graveside service will also be held at the convenience of the family.

Calling hours for Eddleton are call Saturday, August 3, at the same location from 1-4 p.m. A private family service will be held at the convenience of the family.